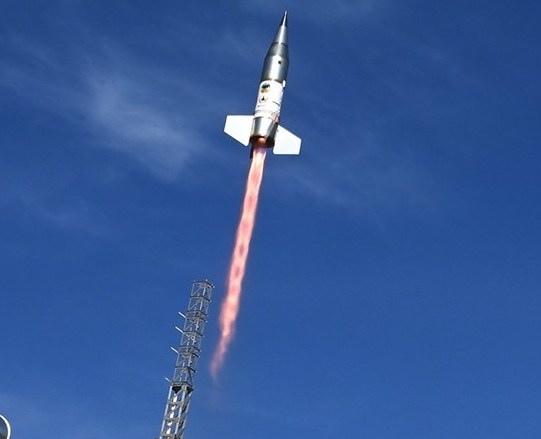 Launched as part of the ‘XL-2’ mission, the launch vehicle was used to carry a test payload for long-term partner Los Alamos National Lab (LANL). The Bolt is powered by Ballesta 3D printed rocket engines, which are fuelled by propellant grains with flexible geometries, that can be tailored to meet application-specific requirements.

X-Bow left stealth mode in March 2022, and has already secured major contracts from the likes of LANL, the US Air Force Research Lab (AFRL), AFWERX, Sandia National Lab, and the Defense Research Projects Agency (DARPA), but XL-2 marks its 3D printed rocket and propellant’s first outing. As such, the firm will now crunch the mission data and prepare for follow-up testing.

“This launch puts us in an extremely strong position to accelerate the capabilities of this suborbital and orbital family of vehicles, and to deliver our customers their desired mission profiles,” says Jason Hundley, CEO of X-Bow Systems. “The inherent simplicity of our Ballesta solid rocket motor and Bolt vehicle architecture allowed us to complete this highly-efficient integration and tactically responsive launch campaign.”

Though it was first founded in 2016, New Mexico-headquartered X-Bow Systems has spent the last six years operating in stealth mode, developing small launch vehicles for both orbital and suborbital launches. The first of the firm’s modular-boost rockets, the Bolt, is powered by engines it describes as ‘solid-rocket motors,’ in that they’re fuelled by solid propellants.

While liquid-propelled rockets have proven to be more efficient and controllable, and found wider deployment over the 20th century, solid fuels and oxidizers continue to be used in military applications. This is due to their simplicity and low maintenance, which allows solid-rockets to be stored for long periods without their propellant starting to degrade.

As a result, solid-rockets tend to launch reliably and provide large amounts of thrust over short distances, but when it comes to firing bigger launch vehicles, as well as fuel efficiency and outright performance, they’re not the optimal choice. With that in mind, rockets powered by solid propellants tend to be used as boosters to raise payload capacity, or for launching lighter payloads into Low Earth Orbit (LEO).

However, X-Bow claims that its propellants, motors and vehicles are different, in that 3D printing them allows for their rapid iteration, and tailoring to mission-specific parameters. By fuelling its engines with an additive manufactured propellant, made up of grains that can be 3D printed to specification, the firm also says they’re “uniquely optimizable” in a way that’s not possible via traditional manufacturing.

Having finally exited stealth mode, X-Bow raised $27 million from backers like Lockheed Martin in April 2022, funding it plans to spend on advancing its 3D printing technology and expanding its offering. Since then, the firm has also made progress with its solid-rocket motor, successfully static fire testing the engine two months later, and it has now capped off a breathless three months with the Bolt’s debut.

Conducted as part of a Responsive Development Experiment (ReDX), the flight test is set to be the first of many carried out alongside LANL. Already, the organizations’ partnership has provided X-Bow with rapid and cost-effective access to experimental flight data, which it’s now using along with recovered hardware to prepare for a secondary mission.

Sponsored by the US Army Space and Missile Defense Command (SMDC) and the Department of Defense Innovation Unit (DIU), the next program is expected to revolve around the company’s additively manufactured solid propellant.

In the months ahead, X-Bow is now planning further launches of increasing size and capabilities in support of other customers scheduled through 2024 and beyond. As part of an OSP-4 contract, the firm also continues to offer its Bolt vehicle to the US Space Force, and just last month, it sent its Pathfinder I ‘Rocket Factory In-a-Box,’ a containerized rocket production facility, to the AFRL for testing.

“The XL-2 launch caps off an impressive and successful three-month effort at X-Bow,” adds Sam McCraw, X-Bow’s XL-2 Mission Manager and Director of Programs. “Over this short period, our talented team designed and built a new test site, completed our first large motor static fire, and pulled off an 11-day launch campaign leading to a successful first flight.”

X-Bow’s first successful Bolt launch no doubt represents a significant advance in its development, but the firm is far from the only one that’s using additive manufacturing to create flight-ready rockets. As recently as June 2022, Rocket Lab fired a NASA satellite into lunar orbit using the Electron, a rocket powered by its 3D printed Rutherford engine.

Earlier that month, Skyrora hot-fire tested its 3D printed rocket engine as well, at a force of 70 kilonewtons for 20 seconds, in the latest of sixteen experiments. Once qualified, the engine is set to be the first staged combustion engine to operate on high-test peroxide, a highly-concentrated form of hydrogen peroxide and novel rocket propellant.

The month of June also saw Launcher awarded $1.7 million to develop its E-2 engine, as part of a US Space Force contract. The propulsion system features an AMCM-3D printed combustion chamber, built from copper in a way that’s said to have helped the company unlock lightweighting opportunities, and therefore fuel savings.

For a deeper dive into additive manufacturing, you can now subscribe to our YouTube channel, featuring discussion, debriefs, and shots of 3D printing in-action.