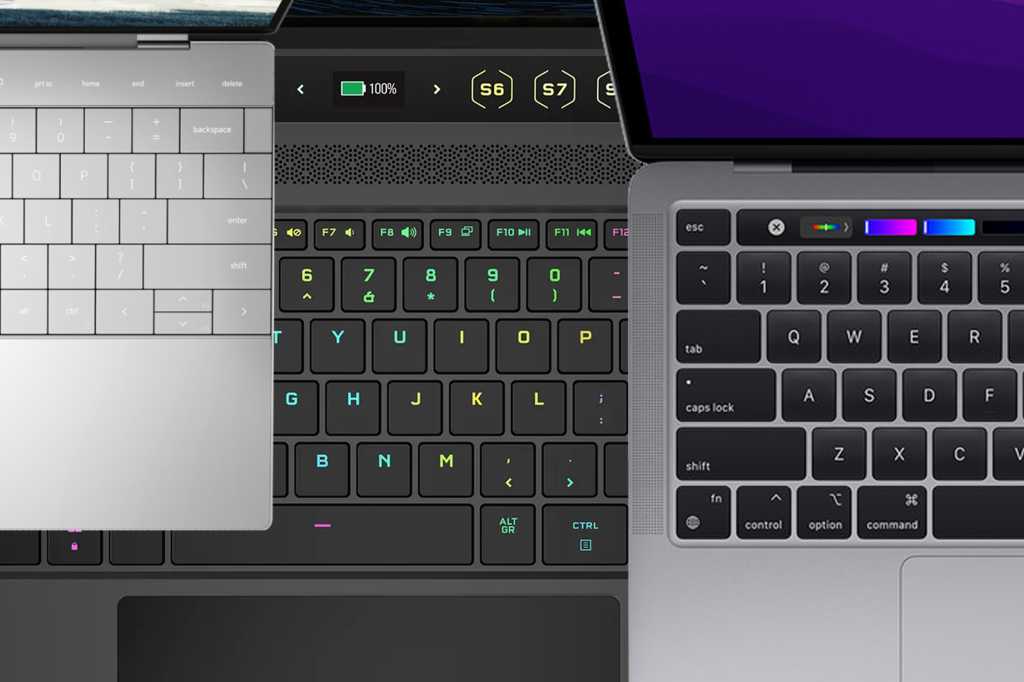 Apple may have killed the Touch Bar on the latest MacBook Pro, but PC makers are determined to give it new life. The latest revival comes from Corsair, which has added an LCD row of customizable shortcut buttons above the keyboard that glows in gamer RGB.

It’s starting to become a trend. Apple killed its Touch Bar on the 14-inch and 16-inch MacBook Pro last year, but PC makers seem determined to prove the company wrong. First Dell introduced the XPS 13 Plus which sports a “new capacitive touch experience that allows you to switch between media and function keys easily.” The laptop is available for purchase but back-ordered for weeks, and there haven’t been any reviews so we don’t know for sure how it will be received, but Dell’s touch bar concept seems even less useful than Apple’s: the buttons are static, they merely float above the actual keyboard, and they don’t appear to add any functionality.

Then Dell added a touch bar to the trackpad on the Latitude 9330. When using a video-conferencing app, a strip of four keys illuminates at the top of the trackpad with options for camera, screen sharing, chat, and mute. That might be useful for quickly shutting off the camera or the mic, but your fingers are still going to need to learn to avoid them when they’re active (presumably whenever you’re using a video-conferencing app).

Now there’s a new PC touch bar, this time on the Voyager a1600, Corsair’s first-ever gaming laptop. Corsair hasn’t named or even officially announced the new feature—it only appeared as a sneak peek—but the company told The Verge that the strip features “10 easy-access customizable S-key shortcut buttons.” Corsair says the keys are powered by Elgato’s Stream Deck software, which enables highly customizable keys geared toward streamers.

Corsair’s Touch Bar doesn’t replace the row of function keys but it is in an odd location—on the hinge below the display. Even in pictures, it looks incredibly uncomfortable to reach. According to renders, you can still access the Touch Bar when the laptop is closed, which seems like an accident waiting to happen (not to mention a battery drain).

Admittedly, Corsair’s Touch Bar looks cool. The buttons have RGB stylings to match the keyboard, and the contours of the laptop give it prominence under the display. But as with Apple’s Touch Bar, it remains to be seen whether people will actually like it—and if it’ll be useful.

But the biggest question I have is: why? No one shed a tear for the Touch Bar when it was killed. While it has its merits, it was never a proper pro-level feature and the implementation didn’t evolve past the original idea. It was too skinny, lacked tactile feedback, required constant scrolling, and didn’t actually save time. It looked nice, but even Apple didn’t seem to know what to do with it.

The MacBook Pro Touch Bar was one of Apple’s most polarizing features and it never really caught on with developers. Maybe a niche use like gaming or video conferencing will have better results, but ultimately the Touch Bar, Apple’s or otherwise, is a failed concept that should stay in the past.