In this post, you will learn how to use Amazon Athena Federated Query to connect a MongoDB database to Amazon QuickSight in order to build dashboards and visualizations.

Amazon Athena is a serverless interactive query service, based on Presto, that provides full ANSI SQL support to query a variety of standard data formats, including CSV, JSON, ORC, Avro, and Parquet, that are stored on Amazon Simple Storage Service (Amazon S3). For data that isn’t stored on Amazon S3, you can use Athena Federated Query to query the data in place or build pipelines that extract data from multiple data sources and store it in Amazon S3. With Athena Federated Query, you can run SQL queries across data that is stored in relational, non-relational, object, and custom data sources.

MongoDB is a popular NoSQL database option for websites and API endpoints. You can choose to deploy MongoDB as a self-hosted or fully-managed database. Databases are a popular choice for UI applications for managing user profiles, product catalogs, profile views, clickstream events, events from a connected device, and so on. QuickSight is a serverless business analytics service with built-in machine learning (ML) capabilities that can automatically look for patterns and outliers, and has the flexibility to embed dashboards in applications for a data-driven experience. You can also use QuickSight Q to allow users to ask questions using natural language and find answers to business questions immediately.

Athena Federated Query uses data source connectors that run on AWS Lambda to run federated queries to other data sources. Prebuilt data source connectors are available for native stores, like Amazon Timestream, Amazon CloudWatch Logs, Amazon DynamoDB, and external sources like Vertica and SAP Hana. You can also write a connector by using the Athena Query Federation SDK. You can customize Athena’s prebuilt connectors for your own use, or modify a copy of the source code to create your own AWS Serverless Application Repository package.

The following architecture diagram shows the components of the Athena Federated Query MongoDB connector. It contains the following components:

To implement the solution, you need the following:

The first step in the deployment is to set up the connector environment. Athena uses data source connectors that run on Lambda to run federated queries. To connect with MongoDB, use the Amazon Athena DocumentDB Connector, which also works with any endpoint that is compatible with MongoDB.

To configure a Lambda connector, complete the following steps:

Athena federates the query using the connector, which invokes the Lambda function. Then the query is performed by the function on MongoDB, and the query results are translated back to Athena. The following is a sample query that was performed on the airlines dataset. 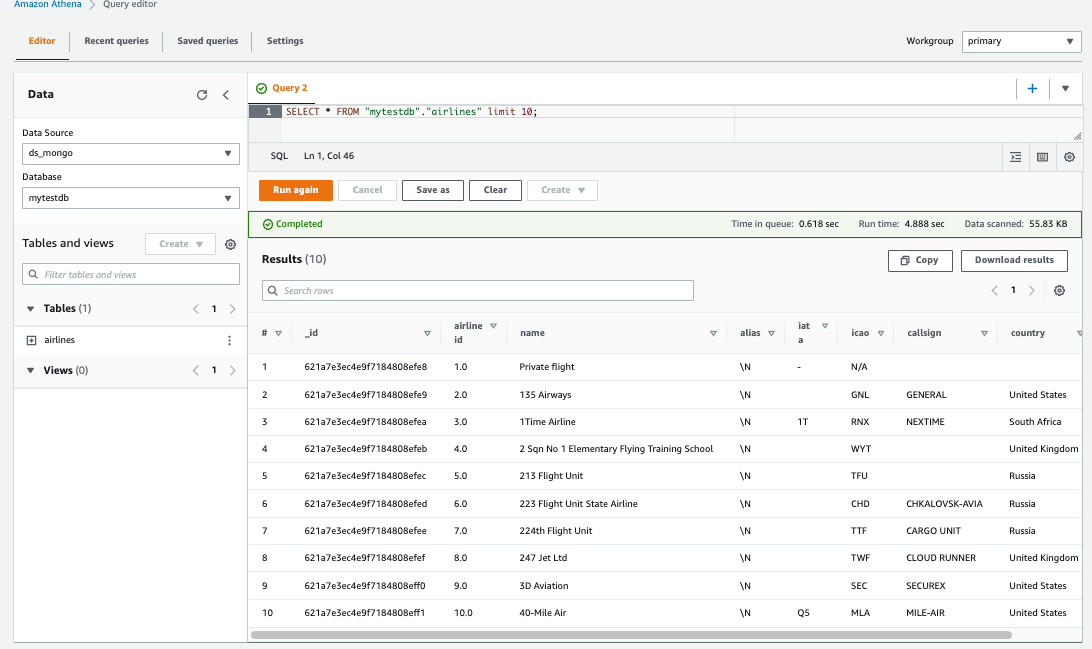 Create a dataset on QuickSight to read the data from MongoDB

Before you launch QuickSight for the first time in an AWS account, you must set up an account. For instructions, see Signing in to Amazon QuickSight.

After the initial setup, you can create a dataset with Athena as the source. The QuickSight service role needs permission to invoke the Lambda function that connects MongoDB. The aws-quicksight-service-role-v0 service role is automatically created with the QuickSight account.

To create a dataset in QuickSight, complete the following steps:

With a few clicks, you should be able to create a dashboard with the published dataset. For instance, you can plot your data on a map, show trends in a line chart, and add autonarratives from the list of Suggested Insights to create the analysis shown in the following screenshot. 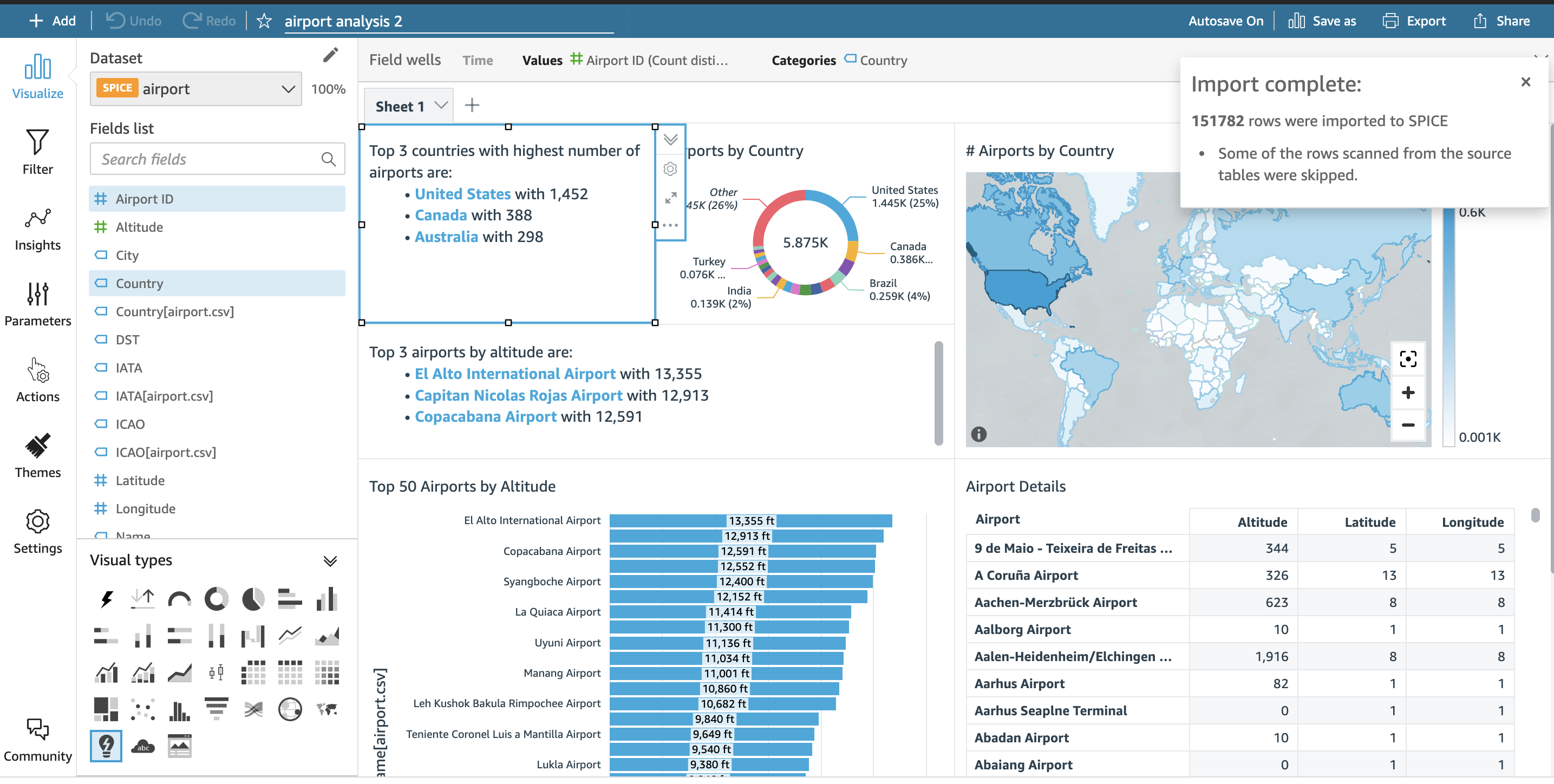 Make sure to clean up your resources to avoid resource spend and associated costs. You need to delete the EC2 instances with MongoDB. In the case of MongoDB Atlas, you can delete the databases and tables. Delete the Athena data source ds_mongo and unsubscribe your QuickSight account from the Manage QuickSight admin page.

With QuickSight and Athena Federated Query, organizations can access additional data sources beyond those already supported by QuickSight. If you have data in sources other than Amazon S3, you can use Athena Federated Query to analyze the data in place or build pipelines that extract and store data in Amazon S3. Athena now also supports cross-account federated queries to enable teams of analysts, data scientists, and data engineers to query data stored in other AWS accounts. Try connecting to proprietary data formats and sources, or build new user-defined functions, with the Athena Query Federation SDK.

Soujanya Konka is a Solutions Architect and Analytics specialist at AWS, focused on helping customers build their ideas on cloud. Expertise in design and implementation of business information systems and Data warehousing solutions. Before joining AWS, Soujanya has had stints with companies such as HSBC, Cognizant.

Nilesh Parekh is a Partner Solution Architect with ISV India segment. Nilesh help assist partner to review and remediate their workload running on AWS based on the AWS Well-Architected and Foundational Technical Review best practices. He also helps assist partners on Application Modernizations and delivering POCs.