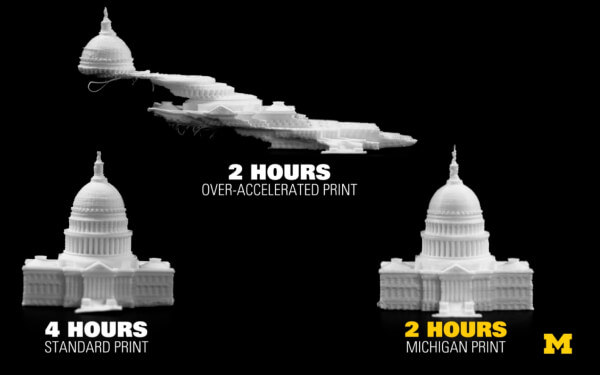 Vibrations in a 3D printer can cause all kinds of headaches with the final quality of a print. In order to reduce the amplitude of these vibrations, printing is normally done at a lower speed. And this is a severe limiting factor in the productivity of a 3D printer.

What if you could crank the speed up and still get a sweet print?

Researchers at University of Michigan have been asking the same question for quite a while now, and they have announced that the results of their labors have been fruitful.

How fruitful? Well, as the headline says, double fruitful! Yes, by using some clever algorithms the engineers have developed a method of compensating for these vibrations via use of a software package, which has now hit the market.

The software is called “FBS” which stands for “Filtered B Splines”, which describes the geometric functions that the software uses for these corrections.

“If you want to reduce vibration in a moving object, most times you can do that by slowing down,” said Chinedum Okwudire, associate professor of mechanical engineering at UM and founder of Ulendo (the company developing the software).

“But as 3D printing is already very slow, that solution creates another problem. Our solution allows you to print fast without sacrificing quality.”

Okwudire has been working on the problem of software-corrected vibrations since 2011, and the FBS software was first installed on a 3D printer by one of his students in 2017. Since then the product was spun-off into the Ulendo company with the help of various university and partner grants, and the software product was revealed at the recent RAPID + TCT Conference.

So how does it work exactly?

“Say you want a 3D printer to travel straight, but due to vibration, the motion travels upward,” explained Okwudire.

“The FBS algorithm tricks the machine by telling it to follow a path downward, and when it tries to follow that path, it travels straight.”

This software is not something that you can simply buy off the shelf and slap on your printer however. Ulendo offers the software to OEMs and uses a royalty scheme with customers.

Their engineers will consult with OEMs and will create a specific firmware tailored to a specific model. That model is then sold to the public with the Ulendo solution installed and they take a royalty for the machines sold with their software on.

And it doesn’t just work for FDM printing either. According to the Ulendo website, it works for DED and some PBF systems as well. And not only does it double the speed, but the company says that it can increase accelerations up to 10x. Nice!

If you’d like to read their white paper detailing how this feat is achieved in more detail, you can read it over at this link.