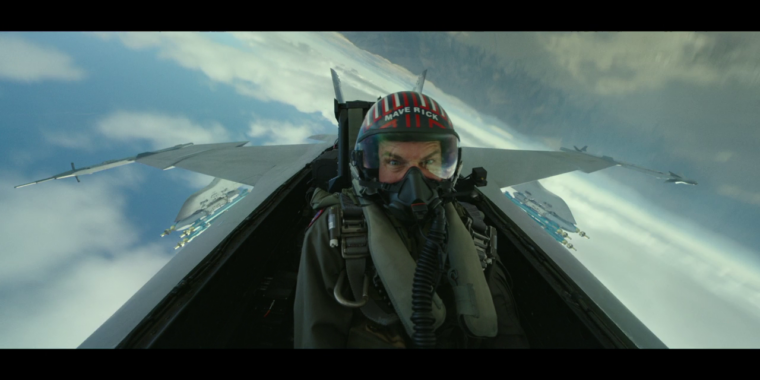 As I walked out of my review screening of Top Gun: Maverick, coming down from its adrenaline-filled finale, a small part of my brain began looking for dents in the film’s armor. Maybe it’s the critic in me, but my thoughts didn’t need long to land on stuff from the original film—a plot point, a stylistic choice, a particular character—that didn’t return this time.

I chewed on those thoughts for a second, but before I could lose myself in cataloging them at length, a sensation came over me. It landed like a massive G-force blast, as if I were a jet fighter pilot attempting a seemingly impossible climb: one of great satisfaction with this sequel and admiration that this film pulled off the impossible feat of adhering to the old while doing something new.

The series’ predilection for steering military theater toward Hollywood-style silliness is arguably more tolerable, as tempered by a savvy script and cutting-edge stunt work. The character development hits important notes for both Pete “Maverick” Mitchell and the people in his high-speed orbit, and the film’s focused supporting cast mostly hits the mark.

Perhaps most important of all, an aging-yet-excited Tom Cruise never steps beyond his pay grade. The Top Gun star of roughly 35 years ago ruled movie theaters for different reasons than the man he is today, yet this film never sees his character Maverick betray his beloved traits or feel like an old man faking like a 20-something hotshot.

A few of the series’ moving parts have been jettisoned so many years later, and lifetime fans of the film will definitely notice them. But Top Gun‘s core tenets—incredible fighter-jet combat, enjoyable cheese, and the big-grin smile of Cruise—have returned in arguably finer form than the original.

Top Gun: Maverick has the added benefit of looking incredible on a large screen, and it’s perhaps the best IMAX format showcase of the past five years. Cruise and co. were clearly eager to take cinematic air combat to the next level, and there’s no getting around it: If you have to stitch three hospital-grade masks together or rent out a private room to feel comfortable in a public movie theater in 2022, you should consider doing so for this film.

Every major flight scene includes per-cockpit camera rigs that emphasize the added height of IMAX’s 16:10 ratio, and in these moments, flying is choreographed to let this camera angle showcase Top Gun-caliber stuff. You might see another plane in view, or vapor trails, or dumped flares dancing and billowing smoke, or a glancing shadow of the jet against the Earth’s surface because the F/A-18 Hornet is actually flying that freaking low in real life. In these moments, the actors don’t hesitate to explode with emotion, whether shrinking back or splashing their palms on the cockpit glass that extends across the entire IMAX screen.

Top Gun: Maverick spends a lot of time in this perspective, so it’s good to see the stunt teams and cinematographers repeatedly strike a hot beach volleyball high-five over this collaboration. Yet the crew also makes up for lost time since the first film was made by letting external cameras, including expertly staged drones, linger over death-defying flight sequences or use wide-angle shots to show how foolishly close its stunt flyers zip past each other. The 1986 style of hard camera cuts to stitch together a shot-down bogey are done. This time, we get to watch full dogfights that lead up to each climactic kaboom.

Really, the lengths to which this film goes to favor real-life stunts over green-screen trickery is incredible. Everyone will have a different favorite on this front, but mine is a dramatic fly-by somewhat early in the film that I won’t spoil for you, except to say that it was reportedly filmed with actors taking the real-life brunt of its buzz. You’ll know it (and feel it) when you see it.

My only shoulder-shrug about the air-combat content comes from a few CGI-filled briefings. In each of these, commanding officers point at holograms and break down each step of a mission or exercise—as if Cruise insisted that this film resemble the Mission: Impossible series in one way or another. While these moments are tolerable, I felt they were explanation overkill that took time away from getting the film’s cameras up into the danged skies.