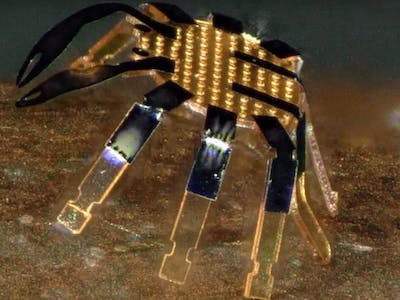 Manufacturing technologies have continually advanced over the years, which has made ever smaller electronic components a reality. That makes these components less expensive, more power efficient, and generally more performant. In the world of robotics, achieving extreme miniaturization has some very important implications for applications in tightly confined spaces. That thought may lead some to think about the difficulties of servicing modern automobile engines, which apparently have been designed specifically for mechanics with toddler-sized hands, but the longtime dream of many has been to build robots small enough to enter a human body to unclog arteries, stop internal bleeding, or fix any number of other problems.

That dream may still be a way off, but the work of a research team at Northwestern University has moved us a step closer to realizing it. They have constructed a crab-like walking robot that is the smallest ever built, at just half a millimeter in width — that is smaller than a flea. Triggered by remote control, this crab can bend, twist, walk, crawl, and jump on command. The robot can walk at a rate of half its body length (about 0.25 millimeters) per second. It will not be winning any races, but for micro-sized robots, that is actually a pretty impressive pace to keep up.

The innovation that allowed this robot to be built was inspired by children’s pop-up books. A flat sheet of a shape-memory alloy material was attached to a slightly stretched rubber substrate. The alloy was fabricated in such a way that when the rubber was allowed to contract, it would pop up into a specific three-dimensional shape — in this case, a crab. The alloy has a property that will cause it to return to the “remembered” initial shape when heated, so by precisely heating specific areas of the crab, it can be made to move in any number of ways. The team used a scanned laser beam to rapidly change the temperature of precise points on the structure; since the robots are so tiny, this heating and cooling takes place very rapidly, allowing fast state changes.

This technique can create structures of any arbitrary 3D shape, and they have already developed millimeter-sized inchworms, crickets, and beetles. Having already created a winged microchip — the smallest ever human-made flying structure — last year, this team has a lot of experience creating micro-robots. While this work has very important implications, at this time, it remains in the realm of research labs. The means of locomotion, directly shining a laser beam on the structure, makes it impractical for many applications. Without a direct line-of-sight to the robot, and the ability to focus a laser with precision on its various components, it cannot be remote controlled. The work has set new standards for miniaturization of robotics, however, and it will be exciting to see what directions this research goes in the future.