This Magical Potion Rack Uses 555 Timers for Its Effects 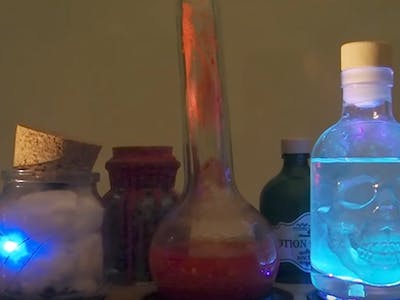 Inspiration for the project

On a recent visit to a small store that sold all sorts of wizarding items such as robes, hats, and wands, Andy West from element14 Presents realized that his purchase of three potion bottles was quite boring when sat upon a shelf. So, to add some more animation and give a greater “wow” factor, he decided to integrate a few electronic circuits in order to provide a new element of intrigue on his magical potion rack.

555 timers in a nutshell

West chose to create three displays for his potion bottles: glowing death, swirling mist, and storm in a jar. Each one would rely on a 555 timer circuit sourced from an old electronics reference guide to drive either a series of LEDs or a motor. Unlike the more common microcontroller that can be programmed to produce different behaviors, the 555 timer is far simpler in how it operates.

The IC, first released in 1972, contains a pair of comparators, a flip-flop, and two outputs. With this combination of blocks, the chip can operate in one of four modes. Astable (free-running) mode allows the timer to act as an oscillator in order to produce a square waveform on the output pin and a sawtooth wave across the capacitor at a set frequency. Alternatively, monostable mode makes the 555 output voltage on the output pin for a set amount of time whenever the trigger pin is pulled low. The last two operational modes are bistable (SR flip-flop) and Schmitt trigger (analog input to digital output).

This first potion uses a clear glass bottle filled with a UV-sensitive liquid that reacts to an array of UV LEDs. A pair of 555 timers (combined into a single LM556 package) work together to generate a sweeping pulse-width modulation signals, which in turn sends a waveform of varying widths to a transistor. Lastly, six LEDs are connected to the transistor and light up with their intensities depending on the duty cycle of the PWM signal.

For his second potion, West wanted to drop a magnetic stirrer into a tube filled with a red flake and watch it swirl around. His initial design has that same astable LM556 PWM circuit from the glowing death potion, but rather than signaling LEDs, the waveform is routed into a decade counter IC. As the name implies, this circuit increments which of its 10 output pins are active each time the input pin is toggled, and in turn, these active signals are sent to a ULN2003 driver IC. West had initially planned to use a series of six coils that activate one after the other to spin the magnetic stirrer, but due to some problems, he swapped it out for a stepper motor instead.

Storm in a jar

The storm in a jar potion is meant to simulate a storm cloud’s lightning within a tiny jar that required a few more LEDs and 555 timers. Because the circuit would need to be contained within the jar, West placed one Qi magnetic coil below the bottom of the glass surface while having the receiving coil just inside the jar. When power is applied, a magnetic field is created, which induces a charge in the secondary coil, and thus, activates the periodic lightning effects.

To see more about this magical potion display, you can watch West’s video here on YouTube or read his post on element14’s blog.