This Fingerprint-Reading Door Lock Is Extra 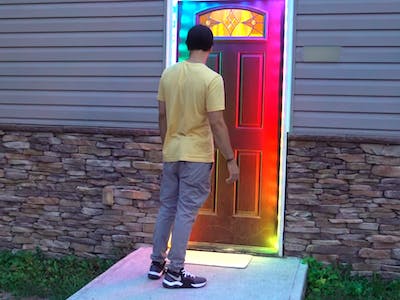 We’ve all been in a situation where we found ourselves locked out of our house, either because we lost our keys or because a roommate unexpectedly locked the door. But this is 2022 and we shouldn’t be relying on old-fashioned keys anyway. To accommodate the forgetful among us, many companies sell electronic door locks operated by key pads, apps, fingerprint scanners, and more. The problem with those products is that they just aren’t extra enough. To fill that glaring oversight in the market, Jaison Dasika built a fingerprint-reading door lock system that integrates LED proximity lighting.

We’ve seen many DIY door locks here at Hackster and they all tend to work in a similar manner. A servo motor controlled by a microcontroller development board turns the deadbolt knob in response to an open command — usually after receiving something like a key code. That’s how Dasika’s door lock works, but with a fingerprint reader instead of a key pad. We aren’t sure what hardware Dasika used, because he doesn’t provide those details. But we suspect that he used something like an Arduino board and a fingerprint scanner like this one from Adafruit. That fingerprint scanner has built-in chips that handle the fingerprint recognition and simply sends a message to the Arduino via serial if it recognizes a fingerprint.

Dasika attached that hardware to his door’s deadbolt using a 3D-printed mount. That contains a simple momentary push button to unlock the door from inside. The fingerprint scanner goes on the outside of the door. Dasika programmed the microcontroller to automatically lock the door after a Hall Effect sensor detects that it’s closed, so there is no need for a manual locking routine. This project got extra when Dasika added a proximity sensor (probably based on an ultrasonic rangefinder) that controls a string of LEDs going around the door frame. As Dasika (or anyone else) approaches the door, the number of lit LEDs gradually increases. When the system recognizes a fingerprint, it plays a little LED animation effect to greet Dasika.

As an interesting bonus, Dasika also integrated an intruder alarm. If the door unlocks without a fingerprint scan — such as if a burglar picks the lock — the system will start flashing the LEDs and sound a buzzer.