This Compact 3D Printer Fits Into a Filament Spool Box 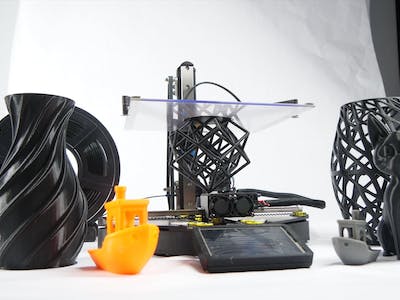 3D printers tend to be pretty bulky and their sizes scale with the build volume. A typical Cartesian 3D printer will have a frame larger than the build volume, which means that print size shrinks along with the printer. To create something more portable without sacrificing build volume, KRAYLYN3D had to rethink many 3D printer conventions. The result is a compact printer called Positron V3 that fits inside of a standard filament spool box.

Take one look at the Positron V3 and you’ll see that it doesn’t resemble any other 3D printer on the market today. The most obvious difference is that it prints upside down, with the filament extruded onto the underside of the build plate. That helps keep as much of the machine as possible within the base, which allows for a folding Z axis. When collapsed, the entire printer fits in cardboard filament box. Setting up Positron V3 takes only a minute or two. The upside down orientation also keeps the moving weight low, which reduces vibration and facilitates faster printing.

Another major innovation in the Positron V3 is the drive system. It is similar to a CoreXY motion system, but rotated 45 degrees and with the typical belts replaced with syncromesh cables. Those syncromesh cables transfer motion like a normal belt, but they can twist in multiple axes. This kinematic system meant that the stepper motors could mount in whatever location was most convenient, which improved packaging. It has most of the same benefits as standard CoreXY kinematics (namely speed), but in a more compact orientation.

The final big breakthrough here is the 90-degree hot end. No, that doesn’t mean that it only heats up to 90 degrees (it can actually reach 250C). It means that the nozzle is oriented at 90 degrees relative to the central axis of the hot end. Once again, this was a space-saving technique. But it doesn’t seem to have reduced extrusion performance at all.

Those unusual design choices resulted in a printer that could fit in a spool box, but that has a large 180 x 180 x 180 mm build volume and speeds up to 250 mm/s. There are many other ingenious tricks at play in the Positron V3, so be sure to check out KRALYN3D’s videos on this printer to learn more. And best of all, this is an open source design!