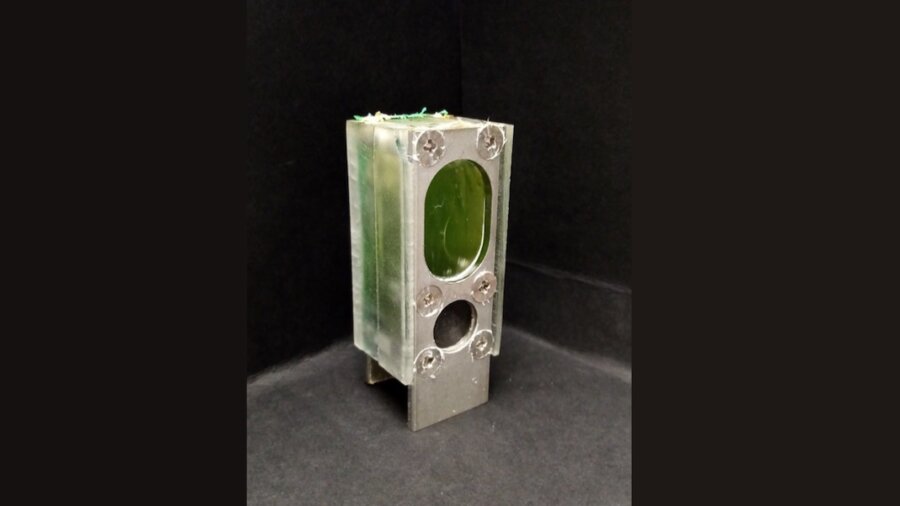 Nearly three billion years ago, oceanic mats of cyanobacteria, called blue-green algae, transformed Earth’s atmosphere by converting carbon dioxide into the oxygen we complex animals breath. In their time on the planet, they’ve survived five mass extinctions with naught but light and water. And now, in a small tank on a windowsill in England, this billion-year-old bit of biotechnology is lending its expertise to a relative rookie.

The tank, constructed by Cambridge scientists, is about the size of a AA battery and has four plastic windows set into a simple aluminum frame. Inside, a colony of algae take in sunlight and convert it to food by way of photosynthesis. In the process, they produce a small electrical current, which makes its way to electrodes in the aluminum frame. To these, the researchers attached a low-power computer chip programmed to run in cycles—45 minutes on and 15 in standby—and left this curious apparatus to its own devices for six months.

To their surprise, it chugged along continuously and without complaint.

“We were impressed by how consistently the system worked over a long period of time—we thought it might stop after a few weeks but it just kept going,” said Paolo Bombelli, a Cambridge biochemist and first author of a paper on the work.

In addition to being a simple power source built from readily available parts and materials, the system runs day and night (in contrast with solar power). The algae, the team thinks, overproduces food during the day, so it continues to happily munch away, and produce electricity, through the night. Although the paper addresses their findings from just that first six-month period, their algae-powered-computer has now been running continuously for a year (and counting).

It’s a pretty nifty trick, but some scaling is probably in order. The system produces a tiny amount of current. The chip, an Arm Cortex M0+ commonly used in Internet of Things applications, sips just 0.3 microwatts an hour to perform very basic calculations. As The Verge notes, if your average laptop uses around 100 watts an hour, you’d need millions of these algae energy harvesters just to check your email or zone out in a Zoom meeting.

But the researchers aren’t targeting laptops. Rather, they believe future iterations would find a niche application powering the billions or trillions of simple sensors and chips making up the Internet of Things. These might take measurements of local conditions in remote locations, for example, or they might be able to charge a small device.

“[Scaling] is not entirely straightforward. So putting one on your roof isn’t going to provide the power supply for your house at this stage,” senior author Christopher Howe told New Scientist. “There’s quite a bit more to do on that front. But [it could work] in rural areas of low and middle income countries, for example, in applications where a small amount of power might be very useful, such as environmental sensors or charging a mobile phone.”

But there is room for improvement. There are thousands of species of cyanobacteria, and the team have found some produce more current than others. Also, in prior research, the team genetically modified cyanobacteria to more efficiently produce electricity.

Other benefits are more immediately apparent. The needed materials are recyclable, cheap, and scalable. Whereas batteries and solar cells are dirty to produce and require materials that aren’t always readily available—like lithium and rare earth elements—aluminum, plastic, algae, and water are more easily procured with less mess. The team has even tested out a model of the system reusing common plastic water bottles.

The hope is this kind of system could be replicated hundreds of thousands of times to power edge devices and potentially be commercially viable in five years. Whether that proves true remains to be seen, but it seems we may need alternative forms of power regardless. The team estimates running trillions of devices on lithium-ion batteries would require triple the lithium produced each year. And as Stewart Brand recently told The New York Times, progress is all about “adding options.”

In any case, wouldn’t it be suitable if the organism that gave us the air we breathe ends up, among other things, helping us measure and keep it pristine too?