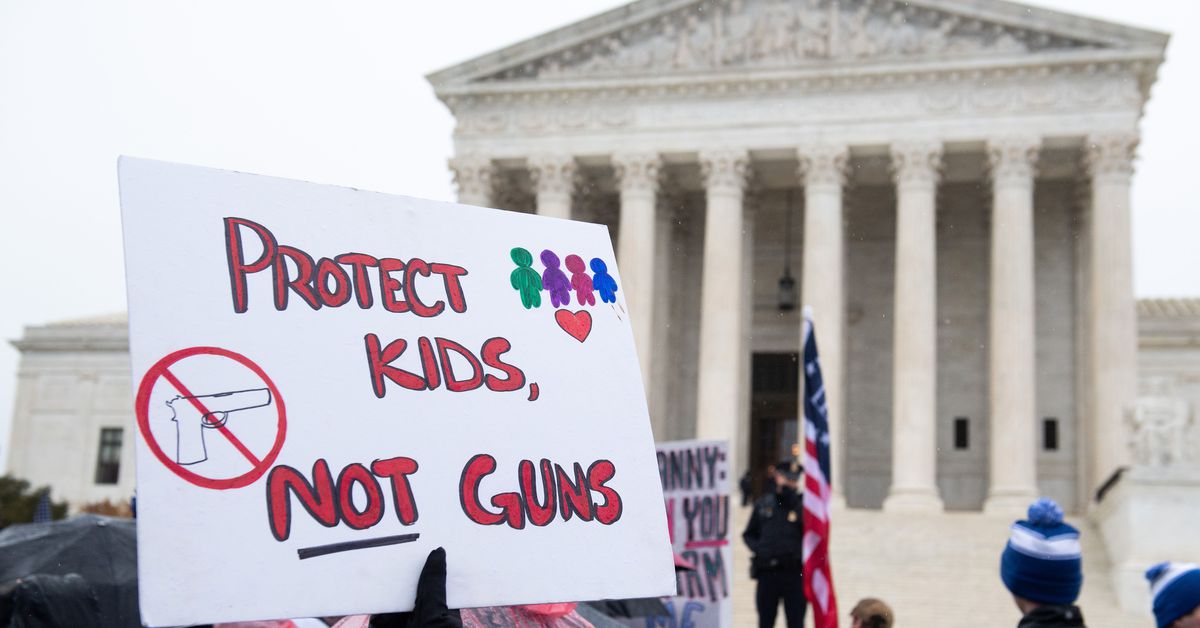 The satirical newspaper the Onion famously repeats the same headline whenever a high-profile mass shooting occurs in the United States: “‘No Way To Prevent This,’ Says Only Nation Where This Regularly Happens.”

It’s a grim reminder that the United States — or, at least, key leaders within government — has chosen to prioritize gun rights over the kinds of laws that successfully protect citizens of many other nations from being struck down by a bullet.

One of the most consequential choices by policymakers to choose gun rights over sensible policy came in 2008, with the Supreme Court’s decision in District of Columbia v. Heller. By a 5-4 vote, the Court held, for the first time in American history, that the Second Amendment protects an individual right to possess a gun. Among other things, Heller gave special constitutional protection to handguns.

The horrific killing of at least 19 children and two teachers in Uvalde, Texas, on Tuesday has drawn renewed attention to America’s gun violence epidemic, as do other mass shootings, all too often.

While mass shootings understandably capture an outsize share of public attention, they account for only a tiny percentage of all homicides committed with firearms. In 2019, for example, 10,258 people were murdered with a gun in the United States. According to a Mother Jones database of mass shootings, which includes incidents where three or more people were killed, only 73 of these victims were murdered by a mass shooter. (Other methodologies with different definitions of “mass shooting” count more victims, but still a tiny share of those who died by gun violence in the US.)

The bulk of gun deaths in the United States look very different from the kind of mass killings that inspire so many American nightmares. Most of these deaths are suicides. 2020 data from the Centers for Disease Control and Prevention, for example, shows that over 24,000 people died of suicide from a firearm that year, while just over 19,000 died in a gun-related homicide (2020 was an unusually deadly year, most likely due to the pandemic).

And when someone is murdered with a gun, the most common motive is an argument that escalates into a killing because someone was armed.

That makes small, easy-to-store, and easy-to-conceal weapons like handguns especially dangerous. And that’s why Heller’s special legal protections for handguns make America’s gun violence problem unsolvable, even if we did have a filibuster-free Congress that was eager to pass gun regulations.

The empirical case against handguns

While Democrats frequently suggest banning assault rifles as a solution to gun violence, those weapons account for only a tiny fraction of homicides. According to the FBI, of the more than 10,000 gun murders committed in 2019, only 364 were committed with a rifle of any kind (the FBI does not break down those murders by type of rifle). So an assault rifle ban would have only a marginal impact on gun violence within the US.

Indeed, an assault rifle ban might not even do much to reduce mass shootings. Mother Jones’s database lists 10 mass shootings in 2019, only four of which were committed with semiautomatic rifles.

By far the deadliest weapon in the United States is the handgun — the easiest kind of firearm to conceal. In 2019, handguns accounted for 6,368 of the 10,258 murders committed with a firearm. If anything, that number underestimates the dangers presented by handguns because the FBI classified over 3,000 of the murders that year as being committed by “Firearms, type not stated.” If you only count gun murders where the type of firearm is known, about 90 percent of all such murders are committed with a handgun.

The dangers presented by handguns are fairly obvious, even though handguns may not be designed to kill as efficiently as a larger weapon. Recall that thousands of deaths occur every year because an argument escalates into a murder. If someone walks into a bar with an AR-15 slung over their shoulder, you’ll probably give them a wide berth. But if the same person is carrying a handgun, you may not realize that they are armed until you accidentally spill your beer on them.

Handguns can be stored in the nightstand near where romantic couples fight. They can be easily tucked into a jacket that someone wears to an illegal drug deal. And they can be brought undetected into a store and then revealed at the moment a robbery begins.

Which is why America’s gun violence problem is largely a handgun problem.

Heller made it impossible to meaningfully restrict handgun ownership

The Second Amendment provides that “a well regulated Militia, being necessary to the security of a free State, the right of the people to keep and bear Arms, shall not be infringed.” And, until fairly recently, the Court took the first 13 words of this amendment very seriously.

As the Court explained in United States v. Miller (1939), the “obvious purpose” of the Second Amendment was to “render possible the effectiveness” of militias. And thus the amendment must be “interpreted and applied with that end in view.”

And the Court gave special protection to handguns. Handguns, Justice Antonin Scalia wrote for the Court, are “overwhelmingly chosen” by gun owners who wish to carry a weapon for self-defense. And thus, Scalia claimed, the Constitution does not permit lawmakers to ban “the most preferred firearm in the nation to ‘keep’ and use for protection of one’s home and family.”

In fairness, Heller also laid out several examples of gun regulations that are permitted under the case’s understanding of the Second Amendment. “Nothing in our opinion should be taken to cast doubt on longstanding prohibitions on the possession of firearms by felons and the mentally ill,” Scalia wrote, or on “laws forbidding the carrying of firearms in sensitive places such as schools and government buildings.”

And Heller permits laws that prohibit “the carrying of ‘dangerous and unusual weapons,’” which is why many judges have said that assault rifle bans are permitted — although it is far from clear that the Supreme Court’s present majority will agree with lower court judges who have upheld such bans. The Court’s current slate of justices appear to be more hostile to gun laws than any Supreme Court in American history.

Notably, Justice Brett Kavanaugh, who is often the Court’s median vote in politically contentious cases, wrote in a 2011 dissenting opinion that the government may not ban semiautomatic rifles like the one used in the Uvalde shooting. Kavanaugh denied that these weapons are “dangerous and unusual” because they are, in fact, “in common use” throughout the United States.

The upshot of Kavanaugh’s opinion is that weapons that are popular cannot be banned, even if they are frequently used to commit murder.

The Court is also hearing a case challenging a 108-year-old New York law requiring anyone who wishes to carry a gun outside of their home to demonstrate “proper cause” before they can obtain a license to do so. Based on the justices’ comments in an oral argument in this case, New York State Rifle & Pistol Association v. Bruen, it appears very likely that the Court will strike down this law.

But even before then-President Donald Trump remade the Court in the image of the Federalist Society, a somewhat less conservative Court declared that handguns are the most favored weapon in the country. And that means that the weapon responsible for the most deaths in the United States is beyond the reach of policymakers who do not sit on the Supreme Court.