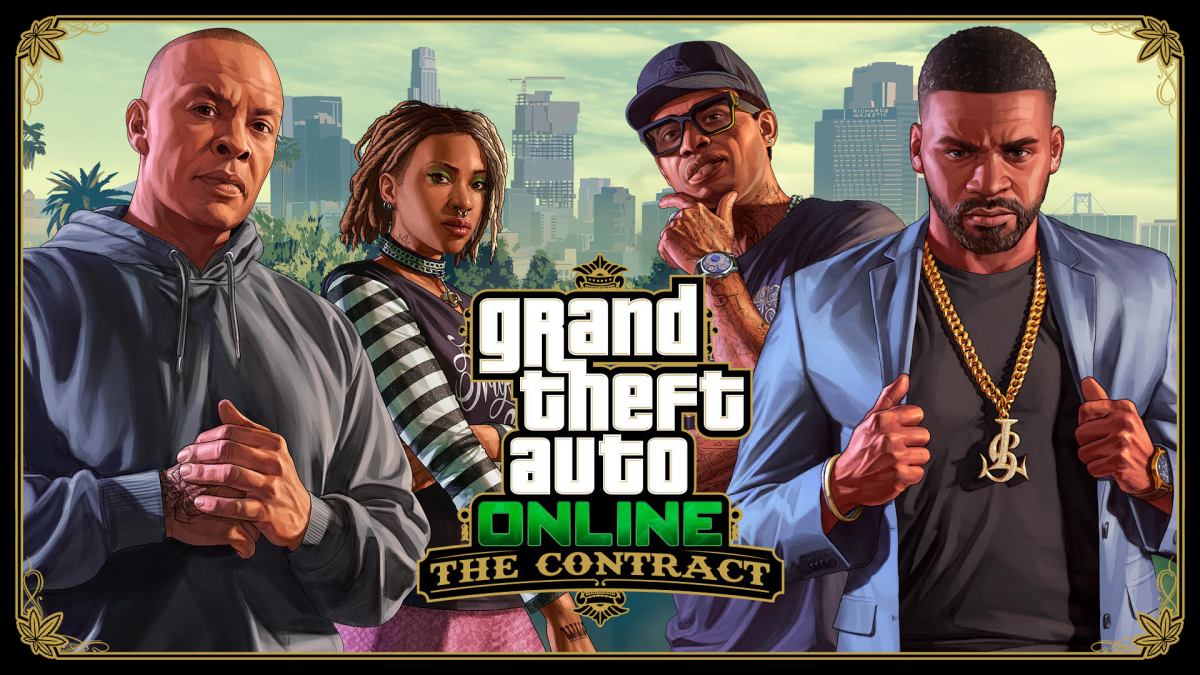 Did you miss a session from GamesBeat Summit 2022? All sessions are available to stream now. Learn more.

Take-Two Interactive reported revenues for its fourth fiscal quarter ended March 31 today, saying net bookings of $845.8 million, up 8% from a year ago. Wall Street is happy with the results, as the stock up 2% to $112.50 a share in after-hours trading.

Take-Two is poised to play an even bigger role in gaming with its pending acquisition of Zynga for $12.7 billion — a move that will make more than half of all bookings come from the fast-growing market for mobile games.

The company said that existing titles — from the NBA, Grand Theft Auto, Red Dead Redemption, and Borderlands franchises — as well as newish Grand Theft Auto: The Trilogy — The Definitive Edition helped grow revenues in the quarter. Strauss Zelnick, CEO of Take-Two, said in an interview with GamesBeat that WWE 2K22 and Tiny Tina’s Wonderlands (both released in March) both exceeded expectations.

“It was once again a great quarter,” Zelnick said. “Net bookings grew 8% We had great success with WWE 2K22 and Tiny Tina’s Wonderlands. Both outperformed our expectations, as did Red Dead Redemption 2. We’re excited about that. We also are establishing our initial guidance for a standalone business and this fiscal year of $3.75 billion to $3.85 billion in net bookings with very significant earnings. So it’s a good story across the board.”

The company’s Rockstar Games label recently teased that it is working on Grand Theft Auto VI, but the company didn’t say anything more about that. Zelnick said the company leaves such announcements up to its labels, in this case Rockstar.

“Our strong fourth-quarter results concluded another highly successful year for our company, during which we delivered net bookings of $3.4 billion,” said Zelnick a statement. “In addition to our outstanding financial results, I am pleased that we took pivotal steps to position our organization for the long term by investing in talent, broadening our portfolio further, and agreeing upon our transformational pending combination with Zynga, which has the potential to exponentially increase our Net Bookings from mobile, while also enabling us to deliver substantial cost synergies and revenue opportunities.”

He added, “For fiscal 2023, we expect to deliver a new record of $3.75 to $3.85 billion in net bookings on a standalone basis. As we execute on our organic growth initiatives, while unlocking new opportunities presented by our pending transaction with Zynga, we believe that we can broaden our portfolio and capitalize further on new platforms, business models, emerging markets, and distribution channels. As we deliver on these growth drivers, we believe that Take-Two remains incredibly well-positioned to increase its scale and prominence in the industry, expand its margins, and deliver long-term value for our shareholders.”

Take-Two said that the majority of the company’s global offices have reopened, but give the evolving dynamics of the COVID-19 pandemic it is following protocols in local areas based on instructions from governments and local officials. In the calendar year 2020, the company saw higher than normal engagement and bookings growth, but as the return to normalcy continues the impact on the business will be hard to predict.

The $12.7 billion Zynga acquisition is still subject to closing conditions and approvals. Take-Two said in April it would raise $2.7 billion in senior notes.

Not counting the Zynga employees, Take-Two has about 7,800 employees now, up from 7,600 in the previous quarter. And the developer headcount is up more than 1,000 people in the past year.

I asked if there was a developer shortage.

“Shortage is probably not the word I would use. I would say that to the extent that all of us are growing our businesses — and we still are — and we seek the best and the brightest as do our competitors, then the best talent is still hard to find. And we are very much seeing that. But we were able to recruit a lot of people in the last year. So I think that’s a sign that people like to work with Take-Tw0 and our affiliates.”

More than $85 billion was invested in games in 2021 (according to Drake Star), through investments in startups, acquisitions, and public offerings. Drake Star believes we’ll see another record in 2022 with more than $150 billion in game deals this year. And thanks in part to the Zynga deal (and Microsoft’s $68.7 billion pending deal with Activision Blizzard) the game industry set new records in the first quarter too.

I asked Zelnick if he had a comment on our story on Moon Studios and its alleged toxic founders, as Take-Two’s Private Division label plans to publish Moon’s upcoming game. But a spokesman said the company does not comment on the internal affairs of its partners.

As for games coming up, Take-Two it will launch its WWE 2K22 Most Wanted Pack on May 17 and its Stand Back Pack on June 7. The Quarry, a horror narrative game from Until Dawn maker Supermassive Games, will debut from 2K on June 10. WWE 2K22 Clowning Around Pack will debut on June 28 and the Whole Dam Pack will debut on July 19.

A brand new title, Marvel’s Midnight Suns, is slated for the second half of the year, while Grand Theft Auto: The Trilogy — Definitive Edition will debut on mobile during fiscal 2023. Also coming in fiscal 2023 are WWE 2K23, NBA 2K23, PGA Tour 2K23, New Tales from the Borderlands, and Kerbal Space Program 2 from Private Division for the PC.

Take-Two said it expects 60% of its net bookings to come from the U.S. and 40% international. It expects recurrent consumer spending to be flat compared to fiscal 2022 and represent 58% of net bookings, down from 64% in the last year thanks to the greater number of new releases.

It expects digital bookings to grow 10% and represent 91% of all net bookings, and it expects 71% of console games will be delivered digitally, compared with 68% from the last year.

It seems that every quarter it makes sense to ask top gaming CEOs about their opinions of the metaverse and non-fungible tokens (NFTs).

I’ve asked Zelnick about these big buzzwords of the moment for the past few quarters. Once again, I asked if he had changed his thinking on NFTs (nonfungible tokens that use the blockchain to authenticate virtual goods in games) and the metaverse, the universe of connected game worlds as envisioned in novels like Snow Crash and Ready Player One.

I also asked if he thought that venture capital, including that for games, is at a turning point with investors becoming less optimistic and more gloomy about the future. The National Venture Capital Association recently said they felt the first quarter was a turning point and that the number and size of dollars could drop in coming quarters due to economic headwinds.

“We’re still seeing capital being raised for venture funds that are focused on interactive entertainment. But I wouldn’t necessarily have insight into how they’re deploying the funds at the moment,” said Zelnick.

I asked if it would get harder to get funding for game studios in the coming months.

“With regard to web 3 games? I think I’ve been saying for a long time that, as interesting as the technology is, when there’s a massive speculative overhang, it’s more challenging for legitimate players to make long-term investments. I think there’s some evidence that the speculation is moderating and perhaps even coming to an end. That means that there will be different kinds of participants and different kinds of investors in the space. And I think it’s a very positive thing from our point of view. So I think there will be a change. I just can’t call when the change will occur. But I’ve been expecting this change for some time. And I’ve spoken about it publicly, repeatedly.”

Regarding the hype cycle, he said, “You just have to look at what actually happens, which is a new token is released in the context of a speculative future metaverse and sells out to the tune of hundreds of millions of dollars in a few days. Usually, when stuff like that happens, that tells you that you’re at a pretty top moment in any market.”

I asked him to elaborate on the metaverse.

“I think it’s pretty much what I was saying, which is, if you define metaverse as a robust digital environment where you can be entertained and entertain and participate in other people’s stories, perhaps create your own and really inhabit the space and have a great time — that already exists. And I think we’re the largest metaverse company out there with GTA Online, Red Dead Online, and NBA 2K Online. If you define it as something else, which is sort of a real estate play within an undefined universe with undefined activities taking place, I’m pretty skeptical about the long-term value.

As for the general weakness in the stock market, Zelnick said in an analyst call that the company doesn’t need to access the capital markets and it doesn’t affect it so much, though he said no one likes to see stock prices fall in general and he believes the company will trade on its fundamentals.

He did say a recession would likely hurt the overall entertainment industry, but Zelnick noted games can be somewhat resistant to a slowdown as gaming grew in the economic downturn in 2008 and 2009. He doesn’t foresee stagflation, or a period of high inflation and high unemployment.

For the record, this is what Zelnick said last quarter.

“I think it depends on which thinking you’re referring to. I’ve been boringly consistent as I always am. We certainly believe in all goods, depending on how you define the word metaverse. We very much believe in the metaverse and we’re probably the biggest metaverse company out there from a revenue point of view, given that Rockstar’s Grand Theft Auto Online, Rockstar’s, Red Dead Online, and NBA 2K Online are all massive metaverses with engaged consumers,” he said.

He added, “Depending on how you define yourself, I might have skepticism but I certainly don’t obsess as defined in the entertainment business. With regard to digital goods, how could we not believe in them? We sell billions of dollars of digital goods every year. Applying rarity and durability with digital good makes all the sense in the world. That said, if I had any concerns, they surrounded the speculation that overlaid some NFTs and all speculations come to an end, usually in a good way for early participants and in a bad way for later participants. And we have no interest in engaging in speculations or purveying them to our consumers because we have a responsibility to our consumers. When that market normalizes, we think there will be great opportunity.”

I asked if he was surprised to see resistance from hardcore gamers on NFTs announced so far. We’ve seen backlash to NFTs proposed by GSC Game World (on Stalker 2), Ubisoft (on Ghost Recon: Breakpoint), and Team17.

GamesBeat’s creed when covering the game industry is “where passion meets business.” What does this mean? We want to tell you how the news matters to you — not just as a decision-maker at a game studio, but also as a fan of games. Whether you read our articles, listen to our podcasts, or watch our videos, GamesBeat will help you learn about the industry and enjoy engaging with it. Learn more about membership.