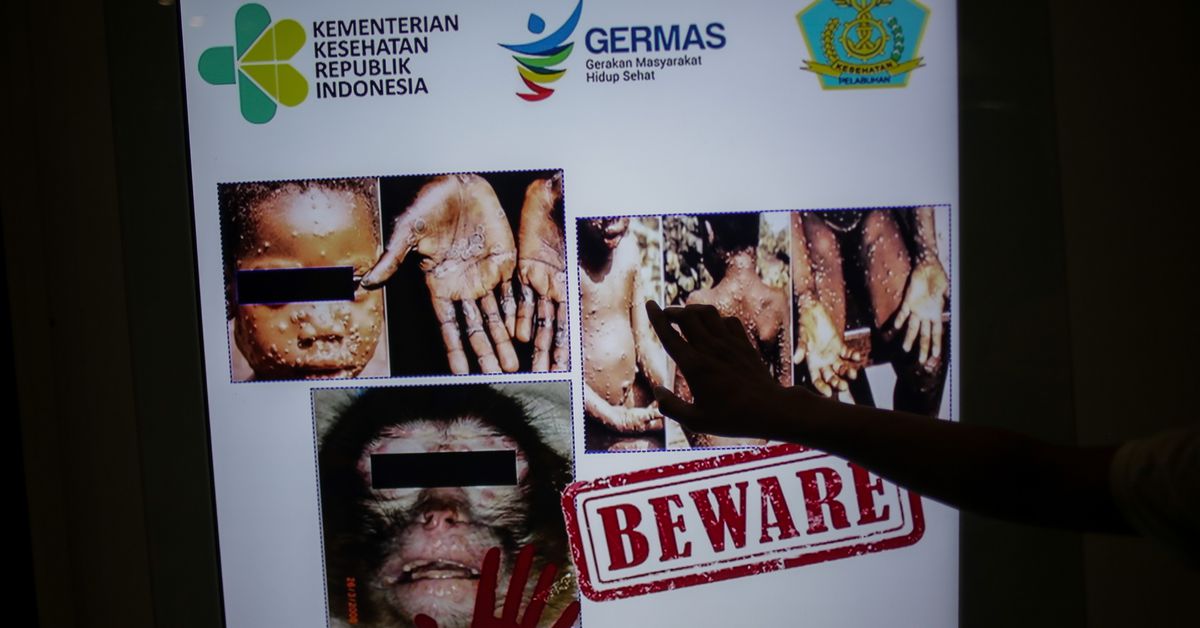 In the past few weeks, more than 350 cases of monkeypox — a viral disease that’s a much milder cousin of smallpox — have been reported in more than 20 countries worldwide. That’s a surprise, and an unpleasant one. Monkeypox has surfaced periodically in the Congo Basin and in West Africa since its discovery in the 1950s, but past outbreaks haven’t involved cases in this many countries, or this degree of apparent person-to-person spread.

Still, because as far as we know from past outbreaks monkeypox usually isn’t very contagious and a good vaccine already exists, it ought to be possible to contain even this apparently larger outbreak. Hence many public health officials have emphasized, in their communications about monkeypox, that people shouldn’t worry or overreact.

Panic is never a good public health strategy, but in attempting to preemptively tamp down public fear, I think experts are failing to learn one of the most important lessons of Covid-19: that we’re too afraid of “alarmism” when outbreaks hit, and should spend less time telling people not to overreact and more time telling them what’s actually going on.

The impulse on the part of the public health community to try to manage public emotion — rather than provide the public with facts — has dogged us throughout the pandemic, often making it harder to make good decisions. Assurances that people didn’t need masks, meant to protect the supply for health care workers, lastingly damaged trust and masking rates. The CDC’s initial decision not to track breakthrough infections — seemingly meant to show confidence in the vaccines — made it harder to tell how long vaccine-based immunity lasted.

There are some solid epidemiological reasons to conclude that monkeypox doesn’t pose the same threat to the world that Covid-19 did in 2020. But instead of condemning alarmism, experts should acknowledge the many reasons for that alarm. The world is horribly vulnerable to the next pandemic, we know it will hit at some point, and the undetected spread of monkeypox around the world until there were dozens of cases in non-endemic countries — despite the fact it typically has low transmissibility — shows how profoundly we’ve failed to learn the lessons from Covid-19 we need to avoid a catastrophic repeat.

Experts should focus more on communicating what they know about monkeypox, pandemics, and the fragility of our current system, aiming to tell people what they can do and the policies they can support in response to their justified fear — instead of preemptively warning against “panic.”

Monkeypox was first identified in research animals in the 1950s, and can cause flu-like symptoms and a characteristic rash with round red blisters all over the body when it infects unprotected humans. The fatality rate has historically ranged from zero to 11 percent, according to the World Health Organization.

For decades, outbreaks among humans were rare, in significant part because the smallpox vaccine protects against monkeypox, and smallpox vaccination was common. In recent years, though, monkeypox cases have been on the rise as vaccination against smallpox, which was eradicated in 1979, began to wane. According to the CDC, Nigeria has reported 450 monkeypox cases since 2017 — not a lot, but a significant increase from case rates in previous decades.

Despite that rise and the more recent spread to new countries, there’s reason for optimism that we can prevent a large-scale pandemic of monkeypox. While the variant causing the current outbreaks isn’t fully understood, and we should not rule out that the virus is substantially more transmissible than we’re used to, the disease in general is a known quantity. Even under pessimistic assumptions about the transmissibility of this new variant, it is much less transmissible than the coronavirus that causes Covid-19, which originally had an R0 of 2-3 and now has an R0 of 8-10 for people without preexisting immunity. Unlike Covid-19, monkeypox is thought to be only contagious while patients are symptomatic, which provides additional reason for optimism about containment.

But optimism should not equal complacency.

A large international outbreak of a disease that was previously thought to be very hard to transmit person-to-person is bad news, period. There are still a lot of unknowns here, and until we know exactly what happened and have slowed the growth of new cases, the chance of this variant of monkeypox being substantially more transmissible — and hard to contain — is not so low that we can confidently assert that everything will be fine.

The lessons of Covid-19

Writing this article, I had an eerie sense of déjà vu. I wrote a similar one in early February of 2020, when Americans were just starting to hear about Covid-19. In that article, I rounded up some takes on the then very novel coronavirus that were in the headlines at the time:

“Don’t worry about the coronavirus. Worry about the flu,” BuzzFeed argued. The flu “poses the bigger and more pressing peril,” the Washington Post said. “Why should we be afraid of something that has not killed people here in this country?” an epidemiologist argued in the LA Times. Other outlets have agreed. An ex-White House health adviser has told Americans to “stop panicking and being hysterical.”

Bad call, I argued at the time. We didn’t know yet how transmissible the coronavirus was. We didn’t know if the early numbers out of China, where the first cases were recorded, were misleading. (It’s now believed they almost certainly were.) “That’s just far too much uncertainty to assure people that they have nothing to worry about,” I wrote. “And misleadingly assuring people that there’s nothing to worry about can end up doing harm.”

Obviously, Covid-19 has done quite a lot of harm, to the tune of more than 1 million dead in the US alone. But we’re at risk of forgetting some of those major lessons from early 2020.

Last week, CNN quoted the CDC’s Jennifer McQuiston, deputy director of the Division of High Consequence Pathogens and Pathology, as saying: “There really aren’t that many cases that are being reported — I think maybe a dozen, a couple dozen — so, the general public should not be concerned that they are at immediate risk for monkeypox.”

This seems true, technically. Most Americans are not at immediate risk of exposure to monkeypox, just like in early February 2020 they weren’t at immediate risk of exposure to the coronavirus (there may have only been a few dozen cases in the US at that time). But this neglects the factor of exponential growth. The thing that’s scary about infectious disease is that a few cases can rapidly become more cases, and eventually become lots of cases. Monkeypox probably isn’t very transmissible, but until we’ve actually contained it, we don’t know how easy it will be to contain, and the fact there aren’t very many cases yet just isn’t that reassuring.

“‘No reason for alarm’ is bad science as well as bad risk communication,” I quoted risk communications expert Peter Sandman as saying in that 2020 story. “Telling people not to worry about an emerging infectious disease because it isn’t a significant risk here and now is foolish. We want people to worry about measles when there’s very little measles around, so they will take the precaution of vaccinating their children before it’s imminently necessary. We want people to worry about retirement when they’re years away from retiring, so they will start saving now.”

Yet the impulse to focus on assuring Americans they shouldn’t panic about monkeypox is very much on display.

I agree with the more nuanced opinions each of these experts share when they’re given a bit more space to expound on their views. It’s straightforwardly true that monkeypox should be easier to contain with contact tracing and vaccination than Covid-19 was.

But everyone’s insistence on prefacing that nuance by telling me not to worry drives me nuts, and I think reflects a mistake in our thinking about pandemics.

Being alarmed about pandemics is completely reasonable

A fact that should not need saying in 2022: Pandemics cause immense human suffering and death. Even if a disease kills only one in 1,000 people who get sick with it, if it hits a billion people worldwide, that’s a million dead. Infectious disease has killed more people than any war in history, and experts keep on warning us that a pandemic much, much worse than Covid-19 is very much possible and really could happen.

The 1918 flu was deadlier than Covid-19, and deadly in particular to healthy young people. A repeat would be devastating, and the world isn’t particularly prepared. Smallpox, when it existed, had an estimated 30 percent mortality rate. The US has vaccines stockpiled in case a lab accident, terrorist act, or bioweapon ever unleashes it on the world again, but vaccinating the whole world against a disease — as we’ve seen with Covid-19 — is hard to do as quickly as a contagious disease can move.

It’s not just diseases from nature, either. With rapid advances in biological engineering, it’s now entirely possible to make diseases that could put smallpox and the flu to shame. “Gain of function” work on making deadly diseases deadlier is ongoing. A small group of bad actors could unleash a virus that kills millions of people — and the systems in place to prevent that are limited, underresourced, and inadequate for the stakes.

In that light, all the focus on telling people not to worry about monkeypox seems a little silly. There are genuine concerns about not crying wolf, about preserving credibility so that when you tell people ‘this is the big one’, they listen. But institutions that initially failed to say “this is the big one” about Covid-19 in February 2020 — and told us, instead, to worry about the flu — aren’t going to repair their damaged credibility by maintaining the same course.

The course I’d like to see them take instead is the one Sandman, the risk communications expert, recommended with Covid-19: “Instead of deriding people’s fears about the Wuhan coronavirus,” he wrote, “I would advise officials and reporters to focus more on the high likelihood that things will get worse and the not-so-small possibility that they will get much worse.”

Taking “worry” off of center stage

Many of the biggest missteps of the last few years have happened when our public health and communications institutions have tried to manage public reactions to what they have to say: from Fauci saying that he dismissed mask-wearing early on in the pandemic out of fears of causing mass panic, to worries that endorsing booster shots (even as the evidence grew they were needed) would make the vaccines look bad, to the FDA’s earlier seeming reluctance to authorize vaccines for children under age 5, despite data justifying it, out of concerns that authorizing Pfizer and Moderna at different times would confuse the public.

And for its part, the media should stop asking public health officials “should I worry?” instead of asking them the questions they are much more equipped to answer: What policies would have prevented this outbreak? What measures need to be in place to contain it? What scenarios are plausible from here?

In many cases, “don’t worry” is just being used as shorthand for “there’s good reason to think monkeypox won’t cause a global pandemic” — which, to be clear, is a true claim. But I think it’s worth spelling out the longer claim, rather than treating worry as the key consideration. People shouldn’t be encouraged to view outbreaks through the lens of “should I be scared?” but rather through the lens of “will this be contained, what will it take to contain it, and if it’s not contained, what effects will it have on the world?”

Once you have the accurate facts about monkeypox — and about the risk of pandemics generally — whether you’re worried by those facts isn’t really a question for the CDC.