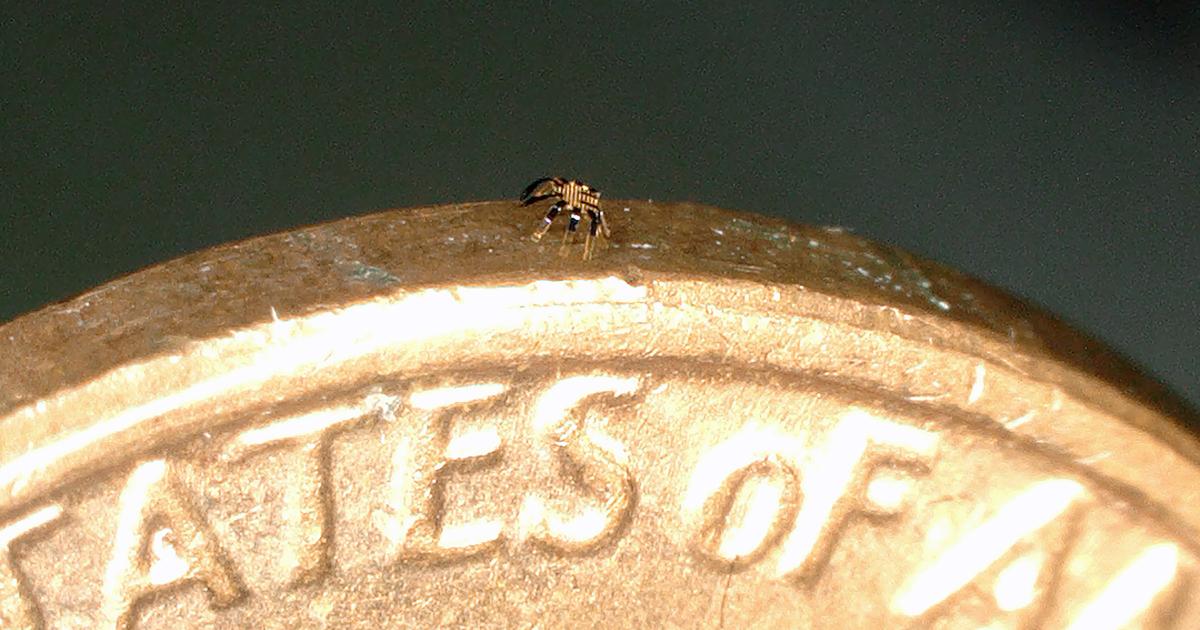 Researchers at Northwestern University in Illinois have demonstrated the world’s smallest remote-controlled walking robot, at just half a millimeter wide. Such tiny machines can bend, twist, crawl, walk, turn and jump without hydraulics or electricity.

The robots are built using shape-memory alloy materials, which are then deformed into the desired shape. Heating these alloys up causes them to spring back to their original shape, and a thin coating of glass is able to elastically snap them back into their deformed shapes when the heat is removed.

The heat in this case was supplied by a scanning laser, which passed over the crabs to heat the alloy up. Because they’re so tiny, the heat disperses extremely quickly, making them surprisingly responsive even at up to 10 cycles per second. The direction of the scanning laser determines the direction of movement – scan right, and the crabs walk right – simply due to the timing of the leg actuations. The team clocked them at an average speed of half their body length per second.

Then they tried some different geometries, including water-walking tripod structures that can be induced to turn by rotating the scanning laser, coiling structures capable of making small jumps, and others capable of twisting and other motions.

The manufacturing process is pretty fascinating – the team fabricated the robots as flat structures, this being their heated state. Then, they bonded the flat structures onto a stretched-out rubber substrate, but only at the foot points. Then the rubber was relaxed, shrinking the robots’ footprint and causing them to pop up off the surface in a controlled buckling process that put them in their final, three-dimensional “cooled” positions, where the glass coating could be applied to hold them in shape until heated.

“Robotics is an exciting field of research, and the development of microscale robots is a fun topic for academic exploration,” said Materials Science and Engineering Professor John A. Rogers, who led the experimental work. “You might imagine micro-robots as agents to repair or assemble small structures or machines in industry or as surgical assistants to clear clogged arteries, to stop internal bleeding or to eliminate cancerous tumors — all in minimally invasive procedures.”

Of course, imagining them as such requires us to imagine how one might get targeted laser heating into the tiny spaces they’re designed to operate in – a prospect that won’t be simple within the body. So there’s plenty of work to do yet.

Oh, and why crabs? “With these assembly techniques and materials concepts, we can build walking robots with almost any sizes or 3D shapes,” Rogers said. “But the students felt inspired and amused by the sideways crawling motions of tiny crabs. It was a creative whim.”

The research is available in the journal Science Robotics.