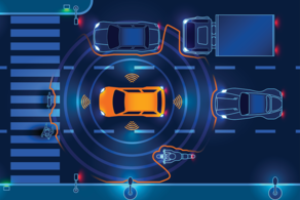 UK roads could see self-driving vehicles rolled out by 2025 thanks to new government plans backed by £100 million (€118.64 million) which prioritise safety through new laws and create thousands of new jobs in the industry.

Some vehicles, including cars, coaches and lorries, with self-driving features could be operating on motorways in the next year, and today’s (19 August 2022) plans set out new legislation which will allow for the safe wider rollout of self-driving vehicles by 2025. This enables the UK to take full advantage of the emerging market of self-driving vehicles which could create up to 38,000 jobs and could be worth an estimated £42 billion (€49.83 billion).

The government’s vision for self-driving vehicles is backed by a total of £100 million (€118.64 million), with £34 million (€40.34 million) confirmed today for research to support safety developments and inform more detailed legislation. This could include researching the performance of self-driving cars in poor weather conditions and how they interact with pedestrians, other vehicles, and cyclists.

The government is also today confirming £20 million (€23.73 million), as part of the overall £100 million (€118.64 million), to help kick-start commercial self-driving services and enable businesses to grow and create jobs in the UK, following an existing £40 million (€47.46 million) investment. Successful projects could help see, for example, groceries delivered to customers by self-driving vehicles, or shuttle pods assisting passengers when moving through airports. £6 million (€7.12 million) will also be used for further market research and to support commercialisation of the technology.

Self-driving vehicles could revolutionise public transport and passenger travel, especially for those who don’t drive, better connect rural communities and reduce road collisions caused by human error. Further in the future, they could, for example, provide tailored on-demand links from rural towns and villages to existing public transport options nearby. They could also provide more direct and timely services that enable people to better access vital services such as schools and medical appointments.

Vehicles that can drive themselves on motorways could be available to purchase within the next year, which users would need a valid driving licence for, so they can drive on other roads. Other self-driving vehicles, for example used for public transport or delivery, expected on the roads by 2025, would not need anyone onboard with a driving licence because they would be able to drive themselves for the whole journey.

Transport secretary Grant Shapps says, The benefits of self-driving vehicles have the potential to be huge. Not only can they improve people’s access to education and other vital services, but the industry itself can create tens of thousands of job opportunities throughout the country.

Most importantly, they’re expected to make our roads safer by reducing the dangers of driver error in road collisions.

We want the UK to be at the forefront of developing and using this fantastic technology, and that is why we are investing millions in vital research into safety and setting the legislation to ensure we gain the full benefits that this technology promises.

The government is today consulting on a ‘safety ambition’ for self-driving vehicles to be as safe as a competent and careful human driver. This ambition would inform standards that vehicles need to meet to be allowed to ‘self-drive’ on the roads, and organisations, such as manufacturers, could face sanctions if standards are not met.

The new laws for the safe rollout of self-driving vehicles by 2025 will be brought forward when parliamentary time allows.

The legislation will build on existing laws, and state that manufacturers are responsible for the vehicle’s actions when self-driving, meaning a human driver would not be liable for incidents related to driving while the vehicle is in control of driving.

Business secretary Kwasi Kwarteng says, Self-driving vehicles have the potential to revolutionise people’s lives, particularly by helping those who have mobility issues or rely on public transport to access the jobs, local shops and vital services we all depend on.

This funding will help unlock the incredible potential of this industry, attracting investment, developing the UK’s growing self-driving vehicle supply chain, and supporting high-skill jobs as these new means of transport are rolled out.

AA president, Edmund King, says, The automotive world is changing rapidly and so the government is right to embrace the positive changes offered by this new technology and back it by funding research and putting forward legislation. Assisted driving systems, for example, autonomous emergency braking and adaptive cruise control, are already helping millions of drivers stay safe on the roads.

It is still quite a big leap from assisted driving, where the driver is still in control, to self-driving, where the car takes control. It is important that the government does study how these vehicles would interact with other road users on different roads and changing weather conditions. However the ultimate prize, in terms of saving thousands of lives and improving the mobility of the elderly and the less mobile, is well worth pursuing.

Today also sees the publication of the Centre for Data Ethics and Innovation’s (CDEI) Responsible Innovation in Self-Driving Vehicles report, which sets out proposals for a trustworthy approach to the regulation and governance of self-driving vehicles.