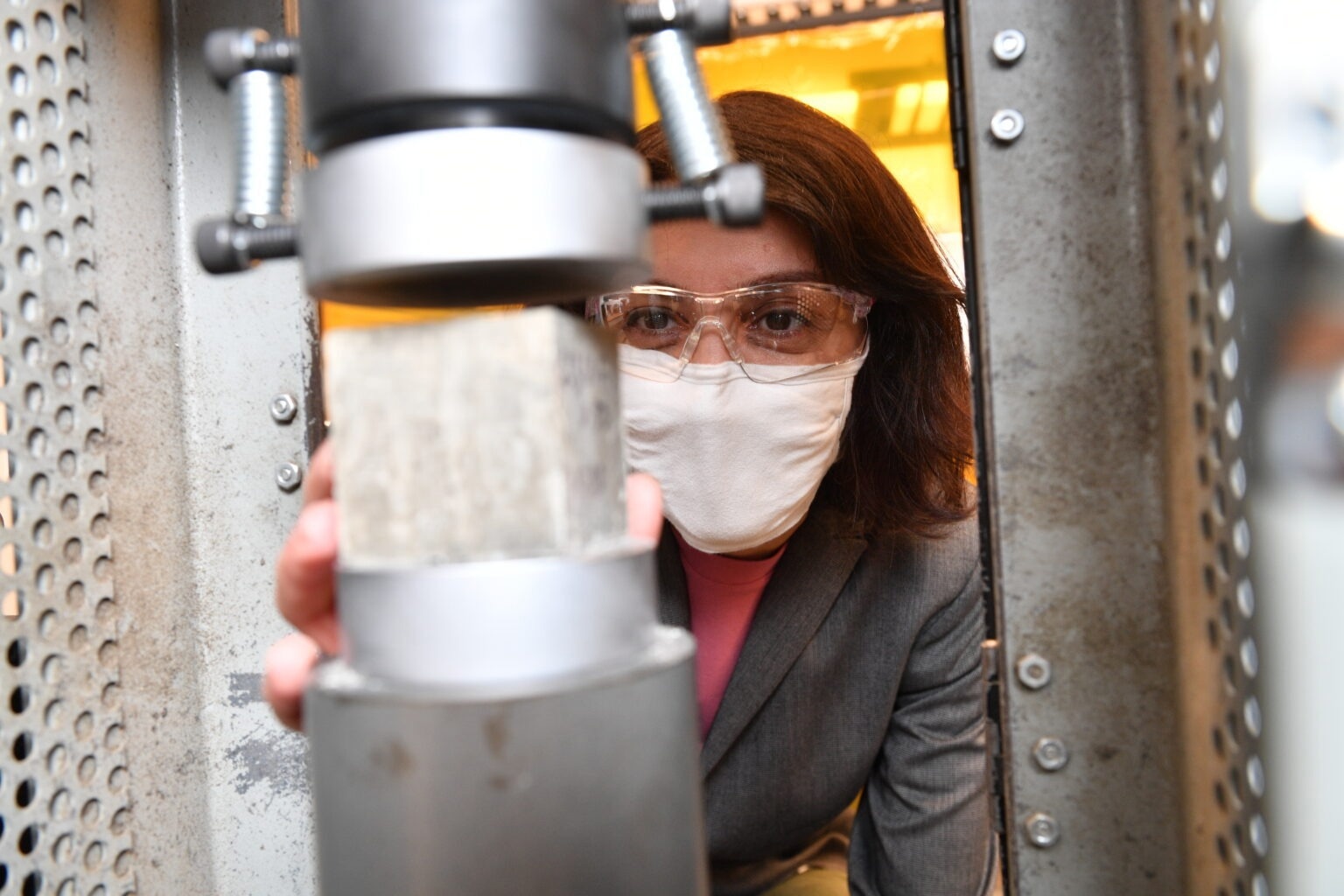 When shrimp shell nanoparticles were mixed into cement paste, the material became substantially stronger — researchers propose an innovation that could lead to less seafood waste and fewer carbon dioxide emissions from concrete production.

A team of Washington State University and Pacific Northwest National Laboratory scientists created nanocrystals and nanofibers of chitin, the second-most common biopolymer in nature, from waste shrimp shells, as reported in the journal Cement and Concrete Composites.

When such small chitin bits, about 1,000 times tinier than a human hair, were mixed into cement paste, the resulting product was up to 40% stronger. The hardening time of the cement was also prolonged by more than an hour, which is a desirable property for lengthy transport and hot weather concrete work.

The concrete industry is under pressure to reduce its carbon emissions from the production of cement. By developing these novel admixtures that enhance the strength of concrete, we can help reduce the amount of required cement and lower the carbon emissions of concrete.

Nassiri headed the research at WSU.

Concrete is used in vital infrastructure like buildings, bridges, and roads all over the world. It is the second most used material on the planet after water. Cement production is a carbon-intensive process that necessitates the use of fossil fuels to achieve the needed high temperatures (1500 °C).

The limestone used in its manufacturing also decomposes, releasing additional carbon dioxide. Cement production accounts for about 15% of industrial energy consumption and 5% of global emissions of greenhouse gases.

According to Nassiri, the issue of durability primarily motivates the high consumption of the material—concrete cracks quickly and must be replaced or repaired frequently.

In the meantime, seafood waste is a major issue for the fishing industry, which produces between 6 million and 8 million pounds of waste per year globally. According to Hui Li, research assistant professor in WSU’s Composite Materials and Engineering Center and corresponding author on the paper, the majority of that waste is thrown into the sea.

In the current world, dealing with climate change through the circular economy, we want to use waste materials as much as possible. One person’s waste is another person’s treasure.

Scientists have worked to enhance concrete using cellulose, a common biopolymer. Cellulose additives would sometimes help the concrete and sometimes not, and the scientists could not figure out why this was.

The WSU team investigated chitin materials at the nanoscale in their research. Crab, shrimp, and lobster shells contain about 20-30% chitin, with the remaining being calcium carbonate, another useful additive for cement. In comparison to cellulose, chitin has an extra set of atoms—a functional group—that enables the scientists to regulate the charge on the surface of the molecules and, thus, how they act in the cement slurry.

“Being able to control the charge on the surface is an important piece to controlling how they function in cement. We could do that quite simply on the chitin because of the carboxyl group that sits in the chitin polymer,” said WSU Regents Professor Michael Wolcott, a corresponding author of the paper.

The success of the cement paste hardening came down to how the particles suspended themselves within the cement slurry and interacted with the cement particles.

They were able to enhance and target the cement’s properties, such as its uniformity, setting time, resilience, and sturdiness, by adding processed nanocrystals of chitin to it. They discovered a 40% rise in the strength of the concrete’s bending capacity and a 12% increase in its ability to compress.

“Those are very significant numbers. If you can reduce the amount that you use and get the same mechanical function or structural function and double its lifetime, then you’re able to significantly reduce the carbon emissions of the built environment,” Wolcott said.

The scientists are now expecting to scale up their work so that they can produce the additive on a large scale. The study must also continue to achieve the same degree of improvement seen on the cement paste scale on the concrete scale.

Aside from the WSU researchers, the interdisciplinary team included Pacific Northwest National Laboratory scientists. The research was supported by the Department of Energy’s Advanced Research Projects Agency-Energy (ARPA E) program, which funds innovative and unconventional energy technology projects that have the potential to lead to emerging technologies.