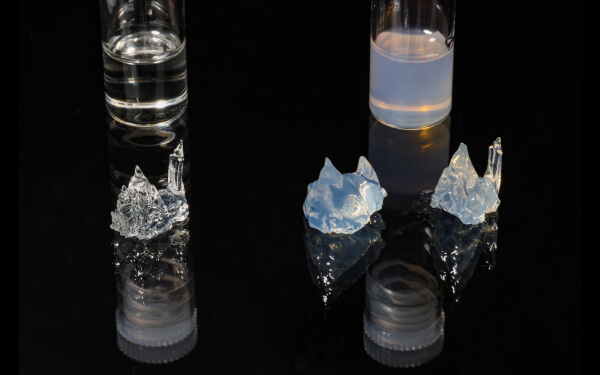 With volumetric printing, instead of a layerwise deposition, the laser light is shone into a vat of rotating transparent photopolymer resin, curing the resin into a part as the targeted laser hits the rotating medium. The resin is cured in three dimensions simultaneously, rather than in two dimensions like a normal resin printer.

Typically, a resin needs to be transparent for the laser to pass through, but this may be about to change thanks to a team of researchers at École polytechnique fédérale de Lausanne (EPFL) in Switzerland, who have figured out how to print through opaque resins.

You can see this demonstrated in the tiny printed Yoda figure below.

This volumetric printing method has resulted in one of the fastest 3D printers in the world, with the tiny Yoda figure taking just 20 seconds to print. On a normal resin printer, this model would have taken 10 minutes.

“Our method works only if the light passes through the resin in a straight line without being deviated,” said Antoine Boniface, a postdoctoral researcher at the EPFL’s Laboratory of Applied Photonic Devices (LAPD).

“Until now we’ve always used transparent resin, but we wanted to see if we could print objects in the kind of opaque resin that’s used in the biomedical industry.”

In order to correct the light ray paths and allow the correct light concentration to hit the targeted regions in the opaque resin, the researchers used a camera to track the path of the light ray as it hit the opaque resin. With the information on the path deviation gained from the camera, the researchers input this into a computer which then compensated for the deviation via the printer itself.

The researchers claim that with this method they can now do volumetric printing in opaque resins with almost the same precision as when printing with the transparent resins. Currently with the opaque material they are printing at a resolution of 0.1mm, and they hope to increase this to 1 micron in the future.

Take a look at the image below to see for yourself. On the left is the print with the transparent resin, and on the right are samples printed in the opaque resin.

With this method, the researchers at the institute hope to be able to print biological materials such as artificial arteries.

If you’d like to read more about the research, you can read the full (open access) paper titled “Controlling Light in Scattering Materials for Volumetric Additive Manufacturing” over at the Advanced Science journal at this link.