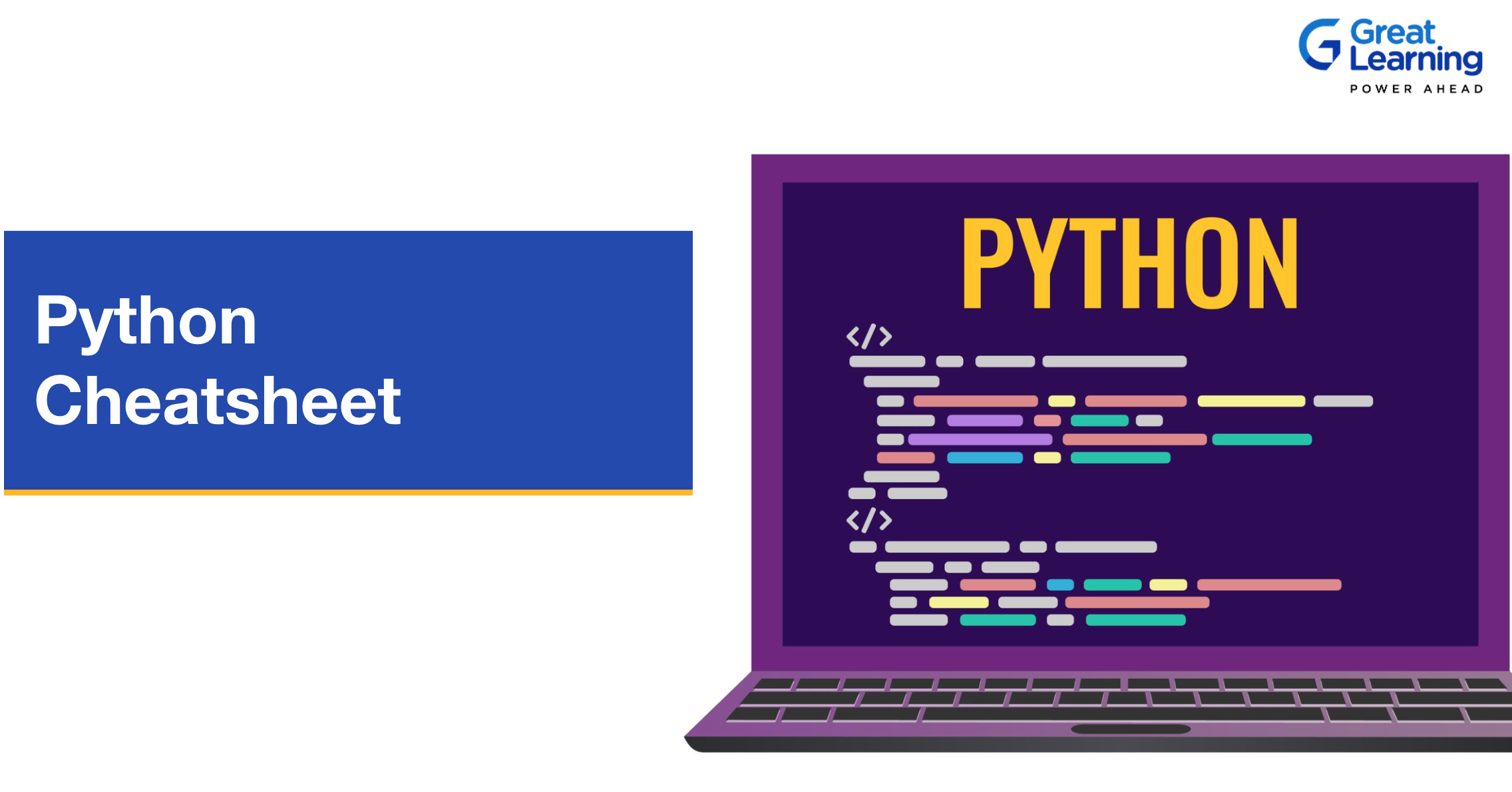 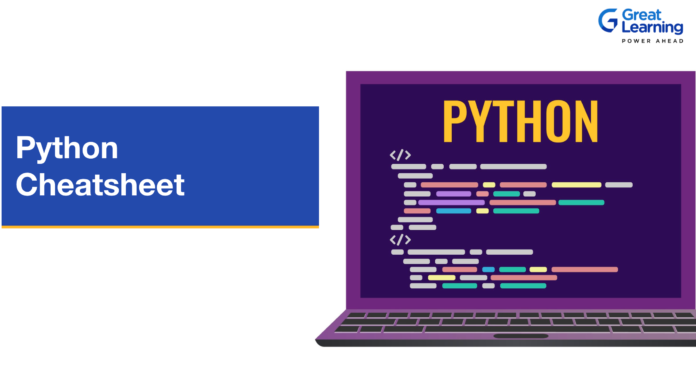 The rapid adoption of technology and emergence of data science has led to increased use of Python for data development in the IT industry. However, it can be difficult to remember all the syntax involved in this language. Python is a unique language that follows a simplified syntax. Many famous applications like YouTube and BitTorrent rely on Python to achieve a number of operations and smooth functionality. Even if you are an ace developer, it is impossible to remember every syntax of Python. This is where the Python cheat sheet will come in handy.

The cheat sheet will include the main aspects of Python that are very straightforward to use whenever you need them, and it will help beginners as well as advanced programmers. Let us refresh several Python tips and tricks with this cheat sheet.

Python is a high-level debug programming language that comes with a set of codes that are easy to learn and remember. Python syntax is the set of basic rules used to write its code. They also find similarities with Perl, Java, and C programming languages. The right syntax is important to get executable code.

Python syntax follows the same standards internationally. Before we begin to talk about various examples of syntax in Python, let us see some rules that every programmer needs to follow while using the syntax –

Let us create a variable code in Python. It goes like this:

The semicolon is used to terminate program statements in various programming languages such as Java and C. However, it is optional in Python.

The output will remain the same in both cases, which is:

Data types are classes that are built into Python. Since everything in Python is an object, the variables are objects of the classes.

Various data types in Python are enlisted below –

In Python, operators are used for performing mathematical functions or logical computations. They can be used to manipulate the value of the operand. For example, in operation 2+4=6, 2 and 4 are operands, and + is the operator.

Based on different data types, Python also has some built-in operations.

append(val): Adds an item at the end

pop([i]): Removes and returns item at index i

String[i]: Used to retrieve the character at the ith position

String[i:j]: Used to retrieve characters in the range i to j

Values: to give all the values

Key: to give all the key items

print(‘You are not Marie, kiddo.’)

Functions are a group of statements that perform a specific task when called. It contains data as parameters and can return data as well.

Here is an example of creating a function in Python:

print(“Hello from a function”)

Here is another example of calling a function:

print(“Hello!! This the output from the function you called”)

Lambda functions in Python are anonymous functions. It means that it does not have a name and can have only one expression regardless of the number of arguments.

The syntax for the lambda function is:

Where it can have any number of arguments, and only one expression is returned.

Multiply argument ‘x’ with argument ‘y’ to return the result –

Some examples of built-in functions in Python are:

File operations refer to functions in Python that are used to create, delete, update and manage files. Both the binary and text files are taken differently. You can set the file function mode as well. For instance, ‘t’ is for text mode and ‘r’ is for read mode. Most commonly performed functions include opening the file, closing, reading, writing, removing, and detaching, among others.

Opening a file in Python

Opening a file in Python consists of four methods –

Closing a file in Python

Try Block checks for errors in the code. This means that the code inside the Try block will only execute in the absence of errors within the program. On the other hand, Except block helps in handling the error. This means that the code within Except block will execute if the program encounters an error in the Try block earlier.

Here is the syntax –

# Executed if an error in the

Here is an example of a Try block –

When ‘x’ is not defined, the try block will generate an exception.

The concept of Oops in Python stems from solving a problem using objects. This is called object-oriented programming (OOPs), which is a programming paradigm. The main idea behind it is to combine the data and functions so that they work together as a single unit. The main concepts of Oops include –

A class is a user-defined constructor that is used for creating objects. Each class has specific attributes associated with it. These attributes are variables and are always public.

Here is how to create a class named MyWorld using a property named ‘y’ :

Comments are used to explain the code in Python and make it readable. Single line comments always start with ‘#’.

If the comment is at the end of the line, Python will ignore it. For multi-line comments, you can use “triple quotes.”

Lists are used to store multiple items within a single variable. In Python, lists are properly ordered, and their elements are indexed. Additionally, lists can be altered even after they are created. Lists are highly important in Python and are used in preserving data.

Square brackets are used to create lists in Python. An example includes:

Some things to remember about lists –

You can start a debugger using this command –

Debugging in Python is done using a debugger program which is interactive source code. It is facilitated by a Python debugger, also known as the pdb module. It usually comes built-in and utilizes basic bdb(basic debugger functions) and cmd(support for line-oriented command interpreters) modules.

Python has built-in functions that help in reading and writing files. Two types of files are handled in Python – text files and binary files.

Read Only or ‘r’ mode – This mode helps to open text files for reading.

Read and write or ‘r+’ mode – This mode opens the files for reading as well as writing.

Write only or ‘w’ mode – This mode is used to open the file for writing.

Write and read ‘w+’ mode – This mode helps to open the file for writing and reading.

Append and read or ‘a+’ mode – This mode allows the file to open for reading and writing. If the file does not exist, it gets created.

Data classes are implemented in Python to store data using structured classes. These classes have specific attributes associated with the data and their representatives. Using decorators, data classes can be implemented.

Attributes are indicated using Type Hints which refers to the specific data type for variables. Data classes are one of the newest features of Python 3.7.

As the name suggests, it corresponds to the formatting of strings in Python. The process involves the dynamic infusing of things in strings. It can be done using the format() method and putting them within the string’s placeholder. The syntax is –

The placeholders can denote indexed numbers or even empty placeholders. You can perform formatting in four different ways –

The ‘venv’ module is used to create lightweight virtual environments. It can be done by executing the following command –

When you run this command, it creates a target directory and places pyvenv.cfg file into it. It also creates lib/pythonX.Y/site-packages subdirectory and a bin containing a copy of the Python binary.