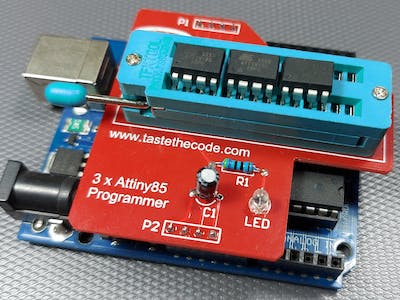 The Arduino Uno is a fantastic platform for getting started with microcontollers, allowing people to first blink a few LEDs, then eventually move on to more advanced tasks like motor control and simple robotics. At some point, however, you may decide that you want something smaller, to handle those tiny tasks that take just a few IO pins.

Like many makers, Bill at Taste The Code found that the ATtiny85, with just five dedicated IO, fits the bill for this perfectly. While less capable memory-wise, one could certainly throw in the different variations of the ATtiny45 and ATtiny25 into the mix as well.

Of course, ATinys don’t have the same sort of USB setup built into an Arduino Uno. As shown in Bill’s Taste The Code video though, an Uno along with a homemade fixture makes a convenient programming interface using the Arduino as an ISP. To take things up a notch (or multiple notches) Bill designed a novel Arduino Uno fixture for programming, which allows him to flash up to three ATtiny chips at the same time.

The new fixture is surprisingly simple, connecting up the necessary outputs to a ZIF socket. Instead of routing each Arduino pin to the correct position, they’re routed to three sequential positions on the socket in parallel. This means that three ATtiny85 boards can be programmed at the same time, making quick work of duplicate projects. The ZIF (i.e. Zero Insertion Force) socket makes the process easy, locking down and releasing the chip or chips as needed.