Apk Know Education and technology related information here
HomeMobileOSOM announces that the OV1 will be powered by the Snapdragon 8+...
Mobile 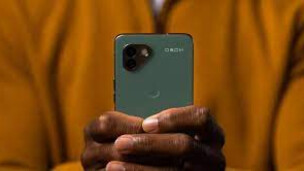 You might remember that late last year we told you that the team behind the Essential Phone had created a new smartphone brand known as OSOM (but pronounced “awesome”). The phone is called the OV1 (OSOM Vault 1). OSOM is an acronym for “Out of Sight, Out of Mind.” As you might be able to tell, the OSOM OV1 is focused on privacy.

When the phone starts shipping (hopefully during the fourth quarter) it will feature the “Secure Data Cable” in the box. When the OSOM OV1 is plugged into a public charging port, the cable prevents data from being collected from the handset. OSOM says that the cable will be made available as a separate accessory before the OV1 is released. And today, we found out which chipset will be powering the OSOM OV1 thanks to a tweet from the company (via Droid-Life).
But before we give you the name of the chip, a little backstory. The OV1 was originally going to be released with the Snapdragon 888 chipset. While certainly a capable piece of silicon, the chip is not cutting-edge and is certainly not the latest generation. Not wanting to gain a reputation for being cheap and out of date, OSOM went back to the drawing board and changed the chip.

And the company sent out a tweet on Friday revealing that the Snapdragon 8+ Gen 1, the enhanced version of Qualcomm’s 2022 flagship chipset, will be under the hood. As a result, the release date of the phone has been pushed back to Q4 from Q3.

Renders of the phone show that it will be pre-installed with some privacy-related apps including the Brave Browser, Proton Mail, and messaging app Signal. The handset will support Ultra Wideband (UWB) which Apple, Google, and Samsung include in their handsets to help users pinpoint missing items that are lost.

The device will feature a triangular dual-camera system with sensors weighing in at 48MP and 12MP. There will be a 16MP front-facing selfie snapper. A near-stock version of Android 12 will be pre-installed and Gorilla Glass Victus will protect the display. The OV1 comes with a stainless steel body with some titanium accents. The back will be ceramic and the first two color options are matte black and white. A third color option has been discussed and it could be a color from this list: Solar Yellow, Borealis Green, Twilight Blue, and Dusk Purple.

The OSOM OV1 will include an all-day battery and 5G support. The company said that the device will not be sold by carriers and could be a financial success even if it sells fewer than one million units. Pricing should be under $1,000. The OSOM OV1 could be a dark hourse in the smartphone industry this year.