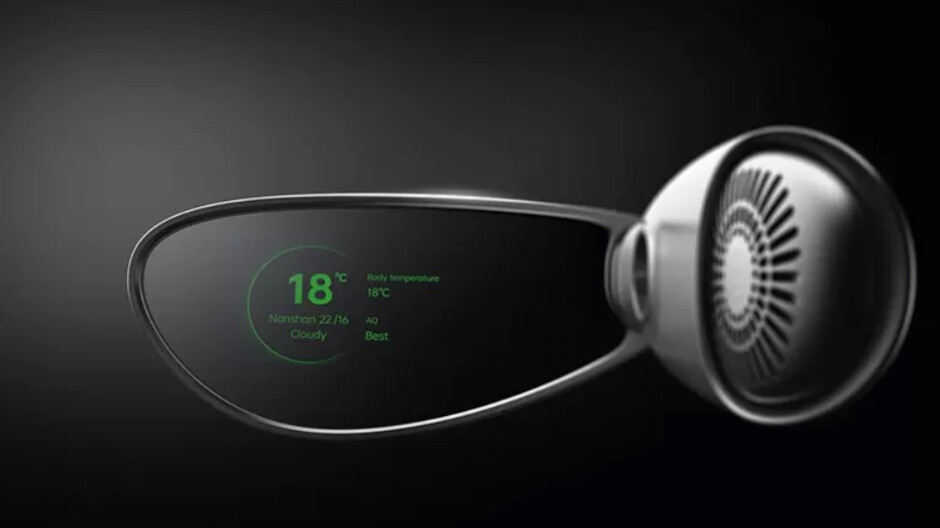 Oppo, the Chinese phone manufacturer, is one of the brands under BBK Electronics’ umbrella along with OnePlus, Realme, Vivo, and iQOO. OnePlus ships its phones inside the U.S. while the other brands do not. Even Oppo, the fourth largest smartphone brand in the world after Samsung, Apple, and Xiaomi does not ship its handsets to the states although this might change.

Last week, Oppo announced that it would show off its Augmented Reality (AR) glasses (the OPPO Air Glass and OPPO AR Glass) at Augmented World Expo USA 2022. According to Android Central, the event will take place June 1-3 in Santa Clara, California. Oppo announced Air Glass in China last December and the device was released this past January.

Unlike most AR Glasses, the Air Glass is a monocle with a single ear frame and displays data sourced from an Oppo phone with an average brightness of 1400 nits. That is brighter than the typical 1000 nits (1200 nits maximum) found on the iPhone 13 Pro Max. A small coffee bean-sized Spark Micro Projector projects images onto the microLED lens.

The Oppo Air Glass is powered by the same Snapdragon 4100 chip used on some Wear OS smartwatches such as the TicWatch Pro 3. The Snapdragon 4100+ was found in last September’s Fossil Gen 6.

The Oppo AR Glass is a more traditionally designed device with two lenses. The device offers real-time language translation and 3D depth mapping. To use tracked air gestures with the Oppo Air Glass or the Oppo AR Glass, the user must have an Oppo handset and the Oppo Watch 2 nearby.

Since Oppo doesn’t sell its handsets in North America, what is the game plan here? One possibility is that the company is looking to bring its products to North America (after all, its OnePlus sub-unit does). In February 2019, Oppo made some noise about selling its phones in the states. However, there was one market that the company wanted to crack first.

At the time, Oppo’s Alen Wu, head of overseas business,  said through an interpreter that before setting off for America, the company would need to solidify its position in Europe. Another possibility is that Oppo is showing off its AR glasses in North America to attract more developers for the devices before releasing the pair in Europe where the company does sell phones.

Another thing to consider is that Oppo uses Snapdragon Spaces, which is an open mixed-reality (XR) platform that allows firms to develop AR apps without having the basic tools needed to do so. Since the platform uses Qualcomm’s mobile hardware, in theory, Oppo’s Air Glass and AR Glass could work on non-Oppo manufactured Android devices powered by Snapdragon chips.

Yi Xu, Director of XR Technology at Oppo says, “Our belief that AR can be used to create a new digital world entirely based on the real world has been the driving force behind our investment and R&D in AR technologies, including the development of fundamental technology, applications, user interfaces and ecosystems,”

Augmented Reality. also known as AR, superimposes data over a real-world image. For example, Google Maps’ Live View uses the rear camera system on your phone to show a real-life view of the area right in front of you. Giant arrows are superimposed on the screen to show you which way to walk to reach your destination. Live View will also show off certain landmarks that you happen to be near.
Among other Chinese firms that don’t sell their handsets in the U.S., or are banned from doing so, Xiaomi has talked in the past about eventually selling its phones in the states. Currently, it does offer its power bank and the Mi Band fitness tracker to be offered in the U.S. In 2016, former Googler Hugo Barra, working for Xiaomi at the time, said that the firm would be coming to the U.S. in the “near future.”

Unless Barra confused the U.S. with India, his comment-at least as far as handsets are concerned-never came true.