Oculus Quest Pro: Everything we know about Project Cambria 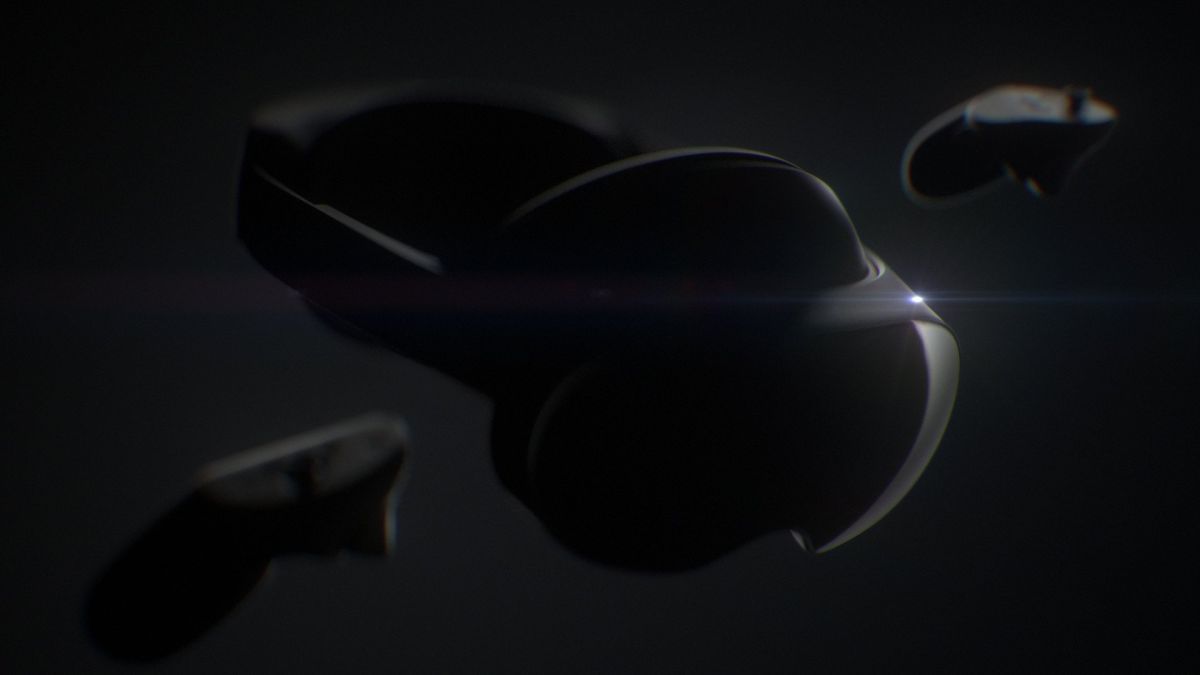 When Facebook rebranded to Meta and dropped the Oculus brand in the process, it announced at the time it was hard at work on a new VR headset codenamed Project Cambria. But even before that announcement, Meta had dropped plenty of hints about an “Oculus Quest Pro” headset in the pipeline.

We have plenty of official and unofficial information on Meta’s next VR headset, including design renders, specs, estimated pricing, announcement timing, and more. If you’re deciding whether to buy the Meta Quest 2 or wait for the Meta Quest 2 Pro, we’ll give you the information you need to decide.

Are Oculus Quest Pro and Project Cambria the same thing?

Back in March 2021, Mark Zuckerberg gave a podcast interview on VR in which he talked about a future Oculus Quest Pro headset. He described how it would use face and eye tracking to support realistic avatars with matching facial expressions. He also mentioned that the lenses needed to be improved to better recreate the world outside the headset for mixed-reality experiences.

Similarly, during an April Twitter Spaces interview, Oculus CTO John Carmack described how some at Oculus felt they needed to push the envelope rather than perfect the Quest 2 design. That camp felt that “we need depth cameras, we need mixed reality sensors, we need eye tracking, we need face tracking.” So they began to actively develop a “Pro version” of the Quest that will use “every sensor in the kitchen sink.”

Why does this matter? Because what little was revealed about Project Cambria during the Metaverse livestream (embedded above at the relevant timestamp) all revolved around these very features. Angela Chang, Oculus Director of Products, described how, with Project Cambria, “your avatar will be able to make natural eye contact and reflect your facial expressions in real time.”

Chang also described how Meta’s new “high-resolution, colored, mixed reality Passthrough” is better designed “to represent your physical world in the headset with a sense of depth and perspective.”

Zuckerberg explained that Project Cambria “isn’t the next Quest,” which means it isn’t the Quest 3 — that’s expected to launch in 2023. But it is “compatible with Quest” and will feature Meta’s “most advanced technology.” That certainly sounds like a Quest Pro headset to us.

We’re fairly confident in this guess, so for the rest of this explainer, we’ll operate under the assumption that the Meta Quest 2 Pro and Project Cambria are the same device.

When will the Meta Quest Pro / Project Cambria ship?

During the 2021 Metaverse event, Angela Chain specifically said, “next year we are releasing a new product that will push the boundaries of VR even further. We’ve codenamed it Project Cambria.” Barring any unexpected delays, it will arrive in 2022.

As for when in 2022, an earlier Quest Pro leak suggested the headset would arrive in “Q2 2022,” meaning anytime from April to June. However, a Meta source claimed it would ship in September 2022, while leaker Brad Lynch suggested Meta would announce it at Connect 2022, which will likely take place in October.

As a sidenote, Meta will apparently follow up Cambria with a second high-end VR headset codenamed Funston, currently scheduled for late 2024 according to the same source. Like Cambria, it would be marketed as a work headset.

What will the Quest Pro cost?

Zuckerberg explained that “Cambria will be a completely new, advanced, and high-end product and it’ll be at the higher end of the price spectrum too.” They will test out new features with Cambria, “before we can hit the price points that we target with Quest.”

YouTuber Bradley Lynch, who’s spoken to several supply chain analysts about the headset, claimed in a recent video that the “bill of materials for this device is around $800,” but that there are rumors of a “subsidy” that could make the device slightly more affordable.

The aforementioned Meta source later confirmed Lynch’s claim, saying it would cost $799. But Meta commented on the news to say that the price would actually be “significantly higher” than $799. Based on that statement, we’d expect Project Cambria’s price to reach at least $1,000, matching the Valve Index, or possibly even higher. Considering Meta wants to market the Quest Pro as a lightweight laptop for your face, it makes sense it would sell it at a decently high price.

What’s new with the Quest Pro design vs. the Quest 2?

YouTuber SadlyItsBradley recently leaked a ton of information on Project Cambria, including its design and specs. Working with 3D artist Marcus Kane, they created renders of the headset based on real-life photos leaked to Lynch by someone with a Cambria developer kit.

Based on these renders and previous leaks from other sources, Cambria will have an Elite Strap with Battery-style strap with a tightening knob on the back and a built-in battery pack. In lieu of a foam face cover, it’ll have a faux leather cover that extends onto the forehead for added support. And like the Quest 2, it’ll be wireless.

Whereas the Quest 2 is very front-heavy, Project Cambria looks more like a pair of glasses with a much thinner front. This is thanks to the lenses’ “pancake optics,” which “fold light several times over” so they can have a thinner, lighter profile with “several optical layers.” Those quotes come directly from Meta, by the way, so this leaked design tracks with the official info.

Overall, this means you’ll have a much more lightweight headset, even with the Elite Strap built in.

While Cambria’s front is mostly a solid, glossy black, it has transparent portions that allow the built-in cameras to peer through at your surroundings. Lynch says the two bottom cameras create a “Lua composite” while the middle 16MP HD camera overlays color and improved resolution on top of the other cameras’ faster visual data. Combined, they’ll offer a much better passthrough experience than the Quest 2’s wimpy cameras can offer.

Lynch also claimed we’ll see an improvement on how IPD adjustment is handled, a problem area with the Quest 2. Like that headset, Cambria will have sliding lenses you’ll physically drag instead of using a knob. But the newer headset is “smooth all the way through,” and will apparently have a higher maximum IPD because of the separate displays.

For a more real-life look, future CTO of Meta Andrew Bosworth showed off a “prototype” headset in early October that looks fairly similar to the leaked Quest Pro and teased Cambria renders, including better rear head support and more sculpted lenses. It’s not a one-to-one match, though, as it lacks the protruding forehead padding.

However, Lynch spoke to two separate sources who tried Project Cambria for themselves and found that the resolution, field of view, and overall visual experience were all extremely similar to the Quest 2. Despite the spec upgrade, you apparently won’t see too much of a difference if you’re a regular Quest 2 user.

Lynch also confirmed in a previous video that Cambria would use the same Snapdragon XR2 chip as the Quest 2, but that it would have improved cooling that would allow for higher clock speeds. You likely won’t get a major gaming performance boost compared to the jump between the Quest 1 and 2.

Zuckerberg did say in an interview that he wanted to create custom silicon for the Quest 3, but this isn’t the Quest 3. It makes sense that Meta wouldn’t make any major changes for this headset model.

Will the Quest Pro have redesigned Oculus Touch controllers?

During a major Quest Pro leak, we got a glimpse of mysterious new controllers that lacked the halo tracking ring of the Oculus Touch. The buttons on these controllers look to have a similar configuration as the current controllers. But they also look to have inside-out cameras to help with tracking, as well as a stylus at the bottom for writing or selecting things in mid-air.

The Oculus Quest 2 supports passthrough, but only in blurry black-and-white. The Oculus Quest Pro will offer a full-color passthrough that gives you a proper look at your surroundings and enables virtual creations to blend more seamlessly into your home, so you almost forget you’re wearing a headset. You can see footage in the embedded video above; and Zuckerberg recently demoed a number of Cambria-exclusive experiences, screenshotted below.

It appears that the passthrough video is close to real life in terms of fidelity, resolution, and color, though there is a bit of a blur around the edges of text or real-life objects. Still, it’s an incredible jump in quality compared to the Quest 2, and ensures you can enjoy experiences without losing “sight” of your surroundings or other people in the room.

Will Project Cambria have exclusive games and apps?

During the Metaverse event, Zuckerberg talked about “unlocking more mixed reality experiences” with Cambria — such as virtual workouts and working at a desk while in-headset — while Chang said they’re “starting to work with developers to build experiences for Cambria as we speak.”

Some XR experiences are technically available on the Quest and Quest 2 through the Presence Platform for Oculus Quest. We’ve seen chess, fishing, and a “real-world” version of the popular VR game, I Expect You to Die, among others. But others will require Cambria’s full-color passthrough and improved hand tracking for the best experience.

In Zuckerberg’s demo video, we saw him interact with a virtual pet, work and write on real-life objects while in-headset, browse social media, and work out with a virtual trainer. In terms of augmented reality, Cambria is leaps and bounds above a typical Quest.

Considering Meta designed Project Cambria as a lightweight work device, it’ll need to have proper productivity software to succeed, an area where the Quest 2 is currently quite deficient. It announced 2D productivity Quest apps last year like Canva and Dropbox, but many of them still aren’t available. In general, we’re waiting to see whether it’ll get proper Android app support or just have people work in the Oculus browser.

In terms of VR content, the Oculus Quest Pro should offer the same experiences as the Quest 2. All of the best Oculus Quest 2 games should work on the new headset, but there won’t be any Project Cambria exclusives that the Quest 2 won’t also get.

Basic hardware, pro gaming library
Project Cambria is liable to be a huge upgrade, but it’s also likely to cost much more than the Quest 2. Millions of people have bought (and love) the Quest 2, and that will be the best fit for regular users who don’t want to use VR for professional or Metaverse contexts.