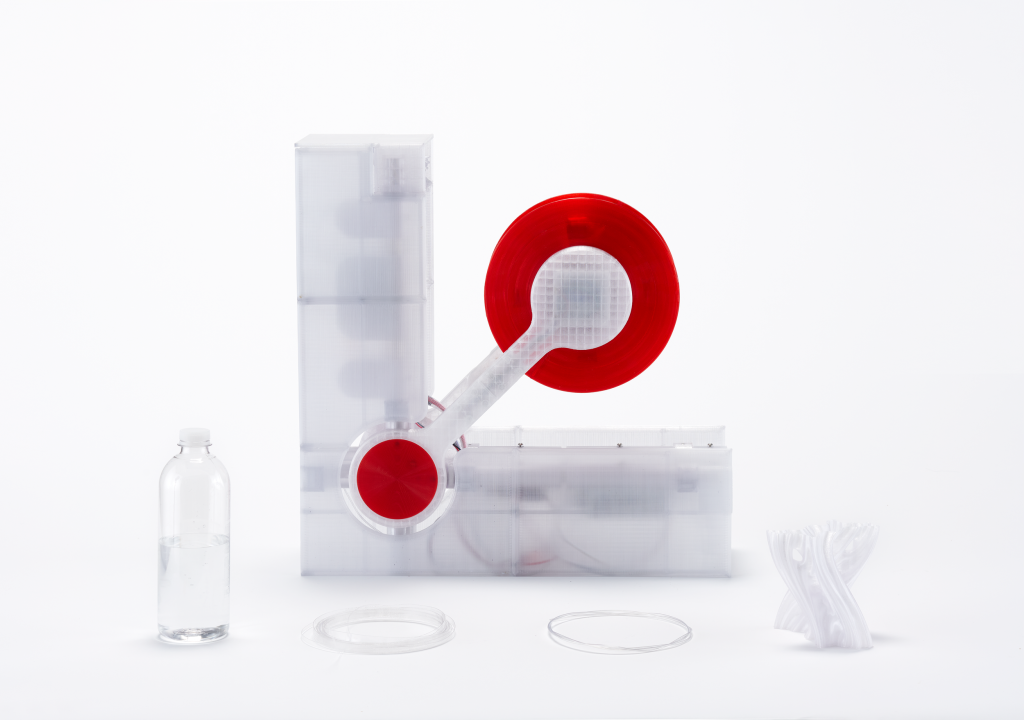 Known as the ‘Polyformer,’ the modular machine is specifically designed so that most of its parts can be 3D printed, putting it in reach for makers, and enabling it to produce most of the materials needed to replicate itself. Moving forwards, Cheng hopes the system will help make home-based production more plausible for a wider number of people, in a way that advances the circular economy.

“I am imagining a future where products can be manufactured at home or in a community centre and be recycled into things at the end of their life that can be used again to manufacture new products right on-site,” Cheng told Dezeen. “The technology might not be there yet but I believe it’s not far from possible if we keep developing and implementing it as a community.”

A portfolio of design innovation

As a mechanical engineering college graduate, and a descendent of a family of carpenters and tailors, Cheng’s background has led him to be challenging, inquisitive and hands-on. Given these traits, it’s hardly surprising that the designer has sought to creatively combine design and engineering, in a way that has seen him develop various products which overcome users’ daily foibles.

Prior to the Polyformer, Cheng introduced several other inventions that may not directly relate to 3D printing, but do showcase how he blends analytics, mechanics and human factors to rectify the pain points of modern consumer goods.

Two years ago, the designer revealed that he had developed a Microsoft Surface smartwatch, complete with push-release strap, haptic touch and the Surface’s traditional block-style interface. This was followed by a set of ASUS ROG-styled augmented reality (AR) glasses, as well as ‘EURYDICE,’ a kind of over-ear headphone designed ‘to fit the 95th percentile of heads.’ The device also has an open-back layout, that’s said to ‘create a lower distortion’ and yield a more spacious sound.

Some of his other designs, however, show that Cheng has begun to change tack, targeting sustainability with his ‘MUJI’ low-maintenance wet waste bin. Designed to be an all-in-one replacement for traditional bins, the collapsible cardboard bag can be thrown straight into a dumpster when full, without hurting the environment.

Continuing with his work on sustainability-focused products, Cheng has now come up with a solution to recycling plastic bottles composed of PET, with around 90% being made from the material. By using a slicing tool built with stacked bearings, the designer says it’s possible to cut such bottles into long ribbons that can then be fed into the Polyformer’s hot end, which thereforms them into 1.75mm filament.

According to Cheng, users can mount one end of the filament onto a motorized spool to automate the process, and thanks to the device’s geared mechanism, they’re able to open and close its outer shell, enabling them to tweak things where needed, while stopping them accidentally touching its hotend during use.

Another benefit of the Polyformer is its distinctive L-shaped design, which provides it with a modularity that allows users to chop and change to their heart’s content. The machine’s vertical posture also minimizes the amount of space that it takes up, potentially making it an ideal office or workspace companion, while its mixture of printed and a few accessible parts should make it available to a wide audience.

With this in mind, the designer has published a free, step-by-step guide to building the Polyformer on GitHub. Since making his plans public, Cheng’s Polyformer Discord has already seen early adopters suggest upgrades, such as adding grinders to the system to enable the recycling of different plastics. Initial signs therefore indicate that makers will help evolve the machine’s design over time.

The unveiling of Cheng’s Polyformer comes at a time when the 3D printing sector is increasingly reflecting on the environmental impact of polymer-based production. One way that developers have sought to make plastics more sustainable, is by packing filaments with recycled material, with the likes of KIMYA unveiling plans to make future launches from 70-100% recycled materials earlier this year.

Other manufacturers such as Fillamentum, have chosen to target biodegradability, and it launched the 100% biodegradable NonOilen material in October 2021. Developed alongside the Slovak University of Technology, the polylactic acid/polyhydroxy butyrate blend (PLA/PHB) is designed so that it can be recycled multiple times without losing its properties.

Elsewhere, Recreus has launched a Purifier range of filaments. Comprising two materials: Filaflex Purifier and PLA Purifier, the product line enables the conversion of carbon dioxide, nitrogen oxides and volatile organic compounds into calcium carbonate, magnesium carbonate and ferrous carbonate, which are harmless to the environment.