Monitoring the Crystallization of Nickel 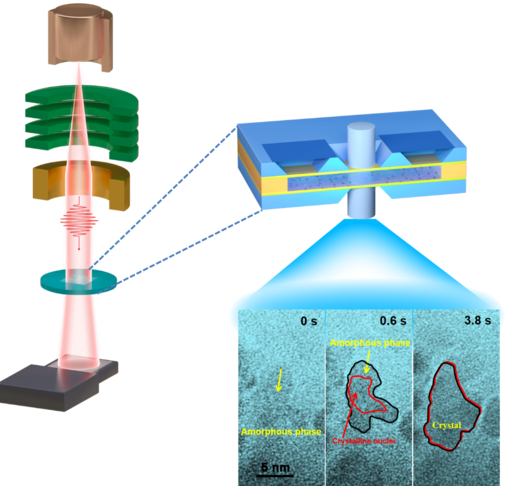 A lack of knowledge of how nickel crystallizes into a solid has hampered its prospective application in new nanomaterials and as a low-cost catalyst in chemical reactions that are performed in many industrial processes.

Researchers have now used liquid-phase electron microscopy to observe such crystallization of nickel’s two structural forms at the atomic scale.

On May 13th, 2022, a report explaining their findings was published in the journal Nano Research.

Catalysts are materials that accelerate the rate of chemical reactions, and they are necessary for the creation of a wide range of industrial goods. However, one of the obstacles they face in a variety of applications, not least in energy technologies, is that many of them are precious metals.

Platinum, for example, costs hundreds of dollars per ounce and is employed as a catalyst to speed up processes to such an extent that makes a variety of clean fuel sources a practical reality.

Nickel, on the other hand, is one of the most abundant metals in the earth’s crust, costing only pennies per ounce. Nickel is also quite stable in a wide range of conditions. As a result of their wide range of catalytic applications, nickel-based catalysts have recently attracted a lot of research attention.

Several strategies have been devised to increase nickel’s catalytic capabilities and to use nickel as a component of new nanomaterials, but to make even more progress, researchers must better understand some of the most fundamental features of nickel formation and structure.

They investigate nickel crystals in their tiny form, at the commencement of their formation (or nucleation) from a liquid, to conduct such research. Any crystal particle with at least one side measuring fewer than 100 nm is referred to as a nanocrystal (one thousand-millionth of a meter).

Nickel nanocrystals can be found in two crystal-lattice forms: cubic and hexagonal, often known as “hexagonal-close-packed” or hcp. The mechanism behind the formation of these two lattice structures—the crystallization process—has remained largely unexplained.

To gain a complete understanding of the crystallization process, direct real-time monitoring of the nucleation routes of hcp nickel nanocrystals at the atomic level is required.

Other researchers have used liquid-phase electron microscopy to study the crystallization paths of silver and gold nanocrystals in real-time, showing the multi-step nucleation processes of these elements’ crystal formation.

In contrast to a traditional microscope, electron microscopy uses a beam of electrons to illuminate an object of interest rather than photons. Since the wavelength of an electron is far less than that of the photons that make up visible light, it is possible to investigate incredibly small things.

Zhang added, “And now, in this work, both in situ liquid cell TEM study and theoretical calculations identified the non-classical features of hcp Ni crystallization in N, N-Dimethylformamide (DMF) solution at a high dose rate of the electron beam.”

The researchers prepared a liquid solution with more nickel than could be dissolved (a ‘supersaturated solution’) so that any surplus would naturally precipitate out as a solid (in other words via crystallization). They then employed a liquid-phase electron microscope to watch the nucleation in real-time.

They have specifically reported the real-time and direct visualization of the dynamic processes of amorphous-phase-mediated crystallization of Ni hcp nanoparticles with (10) or hcp Ni (0001) facets in a homogeneous solution through spinodal decomposition, solidification, and atomic-scale crystallization under high electron beam dose rates.

They also used layer-by-layer growth to examine the facet development of Ni nanocrystals. Finally, the brittle Ni disintegrated into the solution.

The researchers hope that having a better understanding of the fundamental processes of nickel crystal formation at the lowest scale will help them create better hcp-nickel materials systems and catalysts in the future.