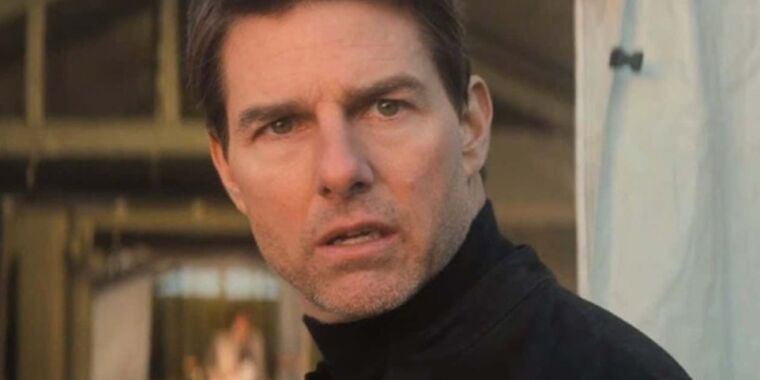 The official trailer for Mission: Impossible–Dead Reckoning Part One (aka Mission: Impossible 7) is here and chock-full of the kind of global intrigue and jaw-dropping stunts fans have come to expect from this hugely successful franchise. The trailer was shown in April exclusively at CinemaCon and the intent was to release it this coming weekend when the highly anticipated Top Gun: Maverick finally (finally!) hits theaters. But an online leak supposedly forced Paramount’s hand, so we get to see star Tom Cruise drive his motorcycle off a cliff a week early. We’ll have to wait until next summer, however—that’s 2023—to see the film.

(Mild spoilers for previous films in the franchise below.)

Launched in 1996 with the first Mission: Impossible, the franchise is one of the highest-grossest film series, with a combined global box office take of more than $3.5 billion so far. The first film was set six years after the 1988-1990 TV series, itself a sequel to the original TV series that ran from 1966 to 1973. Cruise’s character, Impossible Missions Force (IMF) agent Ethan Hunt, was framed for the murder of his team during a botched mission and falsely accused of selling government secrets to an arms dealer. Over the course of the film, he unmasked the real culprit and cleared his name.

Five more films followed, most recently 2015’s Rogue Nation and 2018’s Fallout, both directed by Christopher McQuarrie, who also helms Dead Reckoning Parts One and Two. (McQuarrie won an Oscar for his screenplay for The Usual Suspects, and also directed Cruise in 2012’s Jack Reacher.) Both of the recent Mission: Impossible films were box office hits, grossing $682 million and $791 million globally, respectively. Fallout was also the most critically acclaimed, with many considering it the best installment in the franchise. So fans were thrilled when McQuarrie signed on to write and direct the seventh and final installments.

Paramount originally intended for both parts of Dead Reckoning to be filmed back-to-back but scuttled that plan by early 2021. The production was delayed repeatedly due to the COVID-19 pandemic. (A recording of Cruise shouting at crew members for violating COVID protocols on set—hence risking even more costly delays—went viral in December 2020.)  There was also a fire on a motorcycle stunt rig during filming in Norway, and a dispute over whether or not McQuarrie would be able to blow up a 1908 bridge in Poland for a pivotal action sequence involving a train wreck. The scene was ultimately filmed on a set built in an abandoned quarry.

Cruise still insists on doing many of his own stunts, including that infamous motorcycle scene featured at the end of the trailer. (We don’t see how he survives, but survive he must, given the existence of Part Two.) The cast also includes Hayley Atwell as Grace; Vanessa Kirby as Alanna Mitsopolis, aka the White Widow, a black market arms dealer who is the daughter of the villain “Max” in the first film; Frederick Schmidt as Alanna’s brother Zola Mitsopolis, who acts as her enforcer; and Shea Whigham as Jasper Briggs.

Rob Delaney, Indira Varma, Mark Gatiss, Cary Elwes, Charles Parnell, Pom Klementieff, Lampros Kalfuntzos, and Greg Tarzan Davis will also appear in as-yet undefined roles. There’s not much indication of the plot, but we can assume that the Big Bad—played this time around by Esai Morales—will have a fiendish plot to destroy and/or dominate the world, and Ethan and his plucky IMF team and allies will fight like hell to foil him.

The trailer opens with a lone figure on horseback galloping across a desert, before cutting to quick scenes around the globe—including the obligatory nightclub scene featuring scantily clad gyrating bodies. There are car chases, gunfights, a boat ride in Venice, Ethan and the Big Bad fighting on top of a speeding train, and the release of a deadly gas—everything you want from a spy action flick. “Your days of fighting for the so-called greater good are over,” we hear Czerny’s Kittridge tell Ethan, adding that it’s time to choose a side.  ‘You’re fighting to save an ideal that doesn’t exist. Never did.” I’m guessing Hunt will fight for that elusive ideal anyway.

Mission: Impossible–Dead Reckoning Part One hits theaters on July 14, 2023. Part Two began filming in March and currently is slated for release on June 28, 2024.