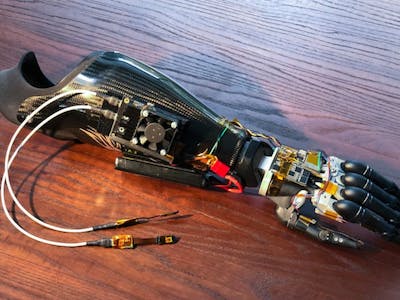 With 185,000 limb amputations taking place in the United States each year, millions of people are living with limb loss. In a world that by and large was not designed with lost limbs in mind, this can be a significant source of difficulty for those people. Prosthetic devices do exist that can offer some level of assistance, but current solutions are not very advanced. In some cases, a cable and harness system relies on movements of the muscles of the shoulders and chest to control the artificial limb. More advanced devices make use of sensors that detect motion in the remaining portion of the amputated limb. Both types of devices are difficult to learn to use because they are so unnatural, and take months of practice before they are of much use to the amputee.

There is now promise of a more natural way for those living with limb loss to control prosthetic limbs, thanks to the recent efforts of a research team at the University of Minnesota. They have designed a tiny, implantable device that attaches directly to the peripheral nerve in a person’s arm. By capturing measurements from this sensor, and interpreting them with a machine learning algorithm, a person’s intentions can be captured, and the prosthetic arm can be moved accordingly. As such, rather than learning a complicated and unnatural procedure to lift one’s arm, it is possible to simply think about lifting that arm in the normal way to realize that outcome.

The method was made possible in part by recent advancements in edge computing technologies — in particular the low-cost NVIDIA Jetson Nano. This computer comes equipped with a graphics processing unit that can massively parallelize machine learning algorithms and enable running real-time inferences directly on the compact device. Using this platform, a recurrent neural network was designed and trained to interpret nerve signals captured by the implanted sensor.

A study was conducted with a cohort of amputees to evaluate the new system, and the results were highly impressive. Participants were found to be capable of controlling movements at the individual finger level, with accuracy rates between 95% and 99%. This was achieved with a very low latency of 50 to 120 milliseconds. Because the device is very natural to use, it did not require an extended period of time for the participants to learn to use the artificial limb.

The core technology that has been developed may have applications beyond limb loss. Those with other neurological disorders may benefit by having sensors implanted in peripheral nerves, rather than a more typical brain implant which requires a much more invasive surgery. The team also believes that in the future, a version of their technology could have applications beyond medicine, perhaps allowing people to control their car or smartphone with their thoughts.

There is still some work that needs to be done before science fiction becomes reality, however. For one thing, the present prototype requires that a bundle of wires goes through the skin to connect to the computing device. A wireless solution will need to be developed to make any non-medical applications both practical and socially acceptable. Whatever future direction this work takes, the current state of the research is already very exciting.