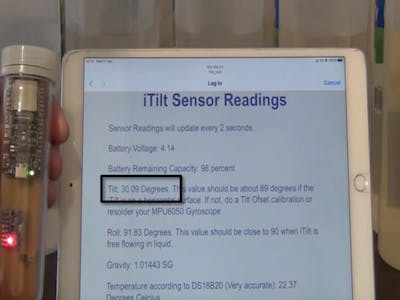 Beer fermentation can take between 7 and 20 days, during which time you’ll likely be curious as to how things are progressing. An instrument called a hydrometer measures the liquid’s density, which decreases during the fermentation process. Traditionally, one could manually monitor this stat over the days and weeks, but being as we’re now well into the 21st century, creator Jaco Slabbert came up with the iTilt IoT hydrometer for easy monitoring.

The device’s electronics consist of a FireBeetle 2 ESP32-E dev board for communications and processing, along with an MPU6050 to determine the hydrometer’s angle in the water. An optional DS18B20 sensor monitors the brew’s temperature, and an 18650 cell provides power. The weight of this battery is used to progressively dip the cylindrical enclosure’s tip below the liquid surface as fermentation occurs, giving an angle that is correlated with the brew process.

Board design and source code are found on GitHub, and Slabbert is quick to note that its similar to the iSpindel hydrometer. Conveniently, the iTilt’s code is written in such a way that it could be applied to that project as well.

The device can work with a number of cloud services for checking your beer progress worldwide, and it features a calibration routine that takes care of the tedious math for you. Since taking one of these units out during the fermentation process could be inconvenient and even unsanitary, the system takes advantage of the ESP32’s sleep capability to save power, waking it intermittently to check the brew status and report back via WiFi.