Customers use AWS IoT SiteWise to build models of their physical operations that represent their assets, processes, and facilities, which will help them understand industrial data in the context of their equipment. Once asset models are created, customers can define an asset hierarchy to accurately represent relationships between devices and equipment within a single facility or across multiple facilities. Our customers tell us that modeling production operation and equipment could be a lengthy process, and it changes and evolves over time. Now with the disassociated data ingestion feature, all data streams will be ingested to the cloud without the prerequisite of associating them to assets. Customers can ingest data streams through an AWS IoT SiteWise Edge gateway, AWS IoT Core, or directly using AWS IoT SiteWise batch PUT API. It also gives you the flexibility to model your production operation after data ingestion. As your production environment evolves, you can adapt to changes and update data stream and asset association without any data loss. It leads to a virtuous cycle of asset modeling experience as illustrated in the virtuous cycle of asset modeling below. 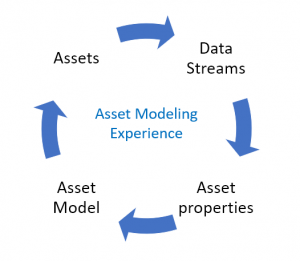 Enabling the new data ingestion mode in AWS IoT SiteWise introduces a new resource called Data stream that is time series data. Data stream and asset are now resources in AWS IoT SiteWise that you can manage independently. Customers cannot disable the feature since access control to data streams and assets are managed independently. If you don’t see “Data Ingestion” setting, your account has this feature enabled already.

You can still disable the disassociated data ingestion from the gateway using access control (IAM), by writing a policy using the isAssociatedWithAssetProperty condition key. The value presented by this condition will be true if the PropertyAlias is associated with an AssetProperty, or otherwise false. This also enables a scenario where one gateway is the “development” gateway and allows all data streams, while another is the “production” gateways and does not allow disassociated data ingestion. This condition is only emitted for actions that get or put property values, such as BatchPutAssetPropertyValue.

The following steps show how you can associate and disassociate data streams with asset properties.

When you read or write time-series data in AWS IoT SiteWise, that data is part of a Data stream. AWS IoT SiteWise maintains associations between AssetProperty (a DataType in SiteWise that contains asset property information), PropertyAlias (the alias of the property), and Data Stream, providing a layer of indirection so that a Data Stream can be moved without having to copy data: that is called Model Mutability.

The Data Stream resource type can be used with IAM to apply different policies based on how the data are identified. When identified by PropertyAlias, a time series resource must be used. A resource for a time series looks similar to:

When identified by AssetId and PropertyId, it is part of an Asset Resource. The asset resource ARN (Amazon Resource Name) looks similar to:

You can configure access control using a Data stream ARN and the PropertyAliasPrefix condition so that your Gateway can only write to Data Streams matching a given prefix.

The AssetHierarchyPath is the asset’s hierarchy path. It is a string of asset IDs each separated by a forward slash. This condition key value looks similar to:

You can look up the Data stream identifier by using the DescribeTimeSeries API or by reading metadata exported to Amazon S3. This identifier is created when data is first ingested for the Data Stream, so a caller must be authorized to the Resource arn:aws:iotsitewise:region:123456789012:time-series/*  in order to create new Data streams.

John is a Senior SDE with AWS SiteWise and previously with Amazon SageMaker Ground Truth. His first job, while still in high school, was at a local dial-up ISP. John has focused his 9 year career at Amazon on building highly available, highly scalable backend systems.