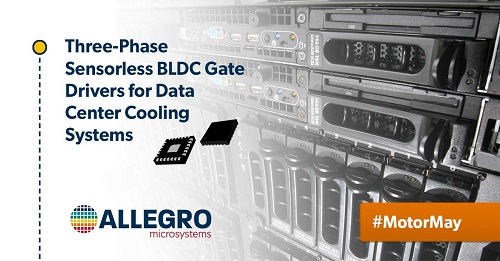 Allegro MicroSystems has inducted the A89332 and A89332-1 into its portfolio of three-phase sensorless BLDC gate drivers. It is the industry’s first code-free solution for server cooling fans. The A89332 has an integrated power loss brake feature while the A89332-1 has an AC-loss feature. Furthermore, these drivers enable compact, high-airflow fan designs to improve thermal efficiency, reducing energy use and data centre costs.

According to the company, the employed algorithms and graphical user interface (GUI) eliminate the need for additional components such as a Hall-effect position sensor and motor control unit (MCU), therefore simplifying the motor tuning, and reducing the R&D overhead.

The backflows caused due to the malfunction of server fans cause them to go into reverse rotation. The reverse flow reduces the airflow by other fans, which makes the other fans work harder to compensate for the resulting airflows, thus increasing the current consumption. The existing solution required adding external circuitry and components. Furthermore, the cost and time to market are increased as the older approach required software coding.

To overcome the problem. the A89332’s integrated power loss brake (PLB) function stops the problematic fans by applying the brake to fans and stops them from spinning. Thus, eliminating unnecessary power consumption and hence improving the thermal efficiency.

“The need to build data centres that operate more sustainably and consume less power is accelerating,” says Andy Wang, Product Line Director for I&O Motors at Allegro. “It’s not just about building low-maintenance ‘lights-out’ facilities; server and component designers are looking for new and novel ways to reduce heat and power consumption, and fans play a big role. We’ve been focusing on the data centre market for some time, and with the addition of the A89332 and A89332-1, we’re giving them improved control over their cooling systems for maximum efficiency.”