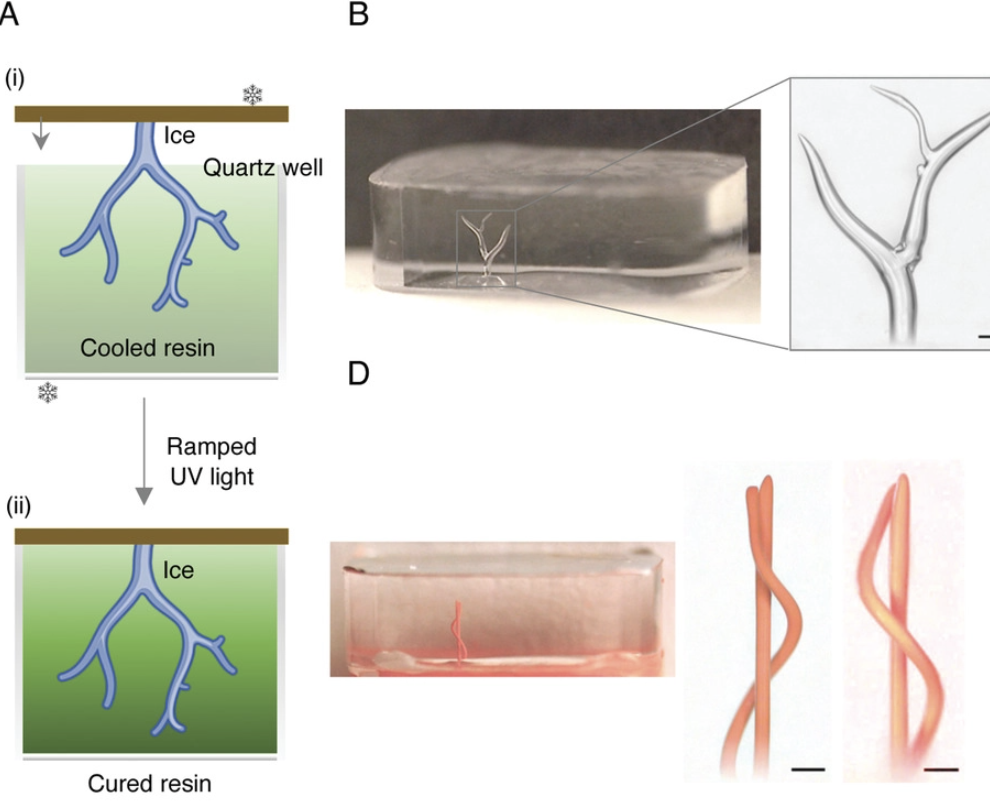 Researchers at Carnegie Mellon University have developed a method of 3D printing microscale ice structures that can be used as sacrificial templates to form intricate channels inside other parts.

This ‘inside-out’ 3D printing process involves jetting water droplets onto a custom-built platform, capable of freezing them upon landing at a temperature of -31 °F. These smooth, support-free ice sculptures can then be dunked in resin and cured, in a way that melts them, leaving behind parts with complex internal pathways.

According to the team, the technology has the potential to yield devices featuring fully-fledged networks of liquid or airflow conduits, including anything from soft robots with the ability to safely and non-invasively interact with patients, to flexible electronics and biomimicking human tissues with vein-like channels.

“Using our 3D ice process, we can fabricate microscale ice templates with smooth walls and branched structures with smooth transitions,” explained Akash Garg, a researcher on the project and mechanical engineering student at Carnegie Mellon University. “These can subsequently be used to fabricate microscale parts with well-defined internal voids.”

Designed to allow fluids to pass through the structure of a part, internal channels are often used in 3D printed products with thermal regulation applications like heat exchangers, or at a smaller scale, in biomedical lab-on-a-chip devices. However, removing any excess material that gets stuck inside such objects can be challenging, even with continued improvements in the field of post-processing.

One way of addressing this issue, which is gaining traction in the research community, is the 3D printing of ice templates that can be integrated into objects before being melted away. At China’s Peking University in 2019, scientists developed a voxel-based ice 3D printing method, in which each voxel could either be jetted as a droplet or an agglomeration, to create complex alphabet-shaped structures.

Going further back to 1999, scientists at Tsinghua University and the New Jersey Institute of Technology even experimented with a rapid-freeze prototype 3D printing process for building larger, centimetre-scale structures. In practice though, these approaches struggled to match the production of objects with smooth surfaces and microscale features. The latter, in particular, also suffered from a time delay between deposition and freezing, which made it difficult to print without supports.

In an attempt to make ice 3D printing more viable, the Carnegie Mellon team have now built their own 3D printer, composed of a temperature-controlled platform mounted onto an X-Y stage with a MicroFab inkjet printhead. Using droplet ejection frequency modulation, this set up theoretically allows jetting to be synchronized with the stage’s movements, thus enabling the creation of smooth-surfaced parts.

By triggering a rapid liquid-to-solid phase change, the system is also able to do this without requiring supports, while conducting the process inside an acrylic enclosure enables it to be conducted in a way that prevents frost formation.

To put their system to the test, the researchers initially attempted to 3D print narrow, leaning pillars, but excessive platform movement caused many of the droplets to miss their target and start new builds. Using the data from these tests, however, the scientists found they could develop pre-programmed stage trajectories that yielded structures featuring curved geometries and overhangs of up to 80°.

After replicating these tests to create a series of increasingly complex 3D geometries, the team went on to assess their efficacy as sacrificial templates. This process saw a set of 3D printed ice sculptures submerged in Henkel Loctite 3971 resin, which had been pre-cooled to prevent them melting instantaneously. Yet, even so, initial templates melted, displacing the resulting part’s internal channels.

By controlling light intensity during curing, however, the team were eventually able to keep ice from melting until parts were finished, before evaporating it away, to leave pathways preserved with a deviation of just 3 µm. Having demonstrated their reverse molding process is “orders of magnitude faster” than other microfluidic 3D printing methods, the scientists say it could address multiple medical applications.

“This is an amazing accomplishment that will bring exciting advances,” added Burak Ozdoganlar, a professor in mechanical engineering at Carnegie Mellon University. “We believe this approach has enormous potential to revolutionize tissue engineering and other fields, where miniature structures with complex channels are demanded, such as for microfluidics and soft robotics.”

Earlier this year, it was also announced that Phase and Virginia Tech’s novel 3D printed microfluidic devices could help researchers formulate new and improved medical treatments for conditions such as brain cancer. Having gained a grant from the National Center for Advancing Translational Sciences, the pair aim to develop a means of streamlining drug discovery as well.

Researchers at the University of Bristol, meanwhile, have developed a low-cost, open-source microfluidic 3D printing method. Requiring only everyday equipment, a desktop 3D printer and a free-to-use software, the process is designed to reduce the complexity and barriers to entry in microfluidic device fabrication.

While you’re here, why not subscribe to our Youtube channel? featuring discussion, debriefs, video shorts and webinar replays.

Featured image shows diagrams of the team’s reverse molding process and some of their prototype prints. Photos via Carnegie Mellon University.