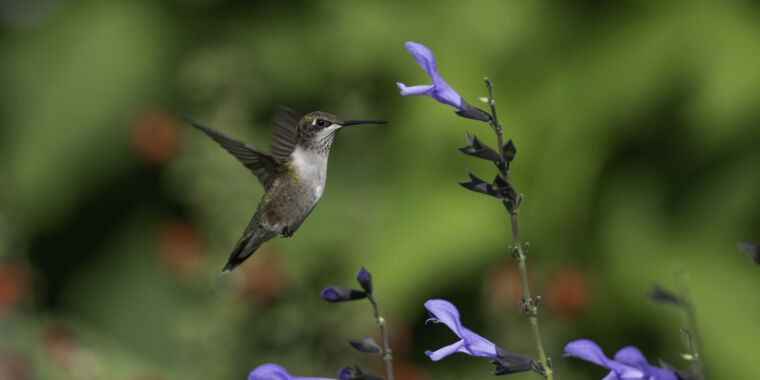 As the Earth’s climate warms, some animals may seek a reprieve from the heat in colder, northern climates or higher altitudes. For some species, these cooler locales may provide greener—so to speak—pastures than their current homes as annual average temperatures continue to increase.

For the diminutive Anna’s hummingbird—which calls North America’s West Coast from California to Vancouver, British Columbia, home—this might not be an option. According to research published Thursday in the Journal of Experimental Biology, a move to chillier and higher altitudes would achieve only two things: cause them to struggle to hover as their metabolic rate drops and sleep most of the day.

“As you get upslope, it’s colder, and also there’s less oxygen available. You can think of this like Everest; people have to go up to basecamp and bring extra oxygen and get used to it up there,” Austin Spence, one of the paper’s authors and a post-doctoral researcher at the University of California Davis’ Department of Wildlife, Fish, and Conservation Biology, told Ars.

To study this, Spence and a team of researchers went into the wild in the summer of 2018 and captured 26 Anna’s hummingbirds by luring them into net traps using hummingbird feeders. “Part of the reason we worked with hummingbirds is they’re easy to catch,” Spence said. “We also knew from previous research that hummingbirds were moving upslope.”

“If they keep moving upslope with climate change, that’s where they’re going to live. So we wanted to see how that would impact them,” Spence said.

In the wild, the birds are accustomed to up to 2,800 meters above sea level. Near the peak of Mount Barcroft, the air has 39 percent less oxygen and is around 5° C colder than they are accustomed to. After four days, the team used a field metabolic system, which Spence describes as a box that sucks in and reads the ambient air and the air that the animals give off to calculate how much energy the animals are using.

This measurement allowed them to get a sense of the birds’ metabolic rates. In all, the birds suffered a 37 percent decrease in their metabolic rate and, the research noted, struggled to hover. Further, the birds spent 87.5 percent of their nights in a state of torpor. This inertia helped them save energy, Spence said. “They could save energy, but they weren’t responding to the oxygen well … they just weren’t flying as well,” he said.

As the climate changes, Anna’s hummingbird may struggle to move to and survive in higher and cooler altitudes.

However, the research only dealt with acute exposure over a few days. The team wants to investigate how the birds would handle the higher altitude for longer periods, Spence said. “When people go to climb Mount Everest, they have to stay at basecamp for a little bit because staying at basecamp helps them acclimatize to the new conditions,” he said.