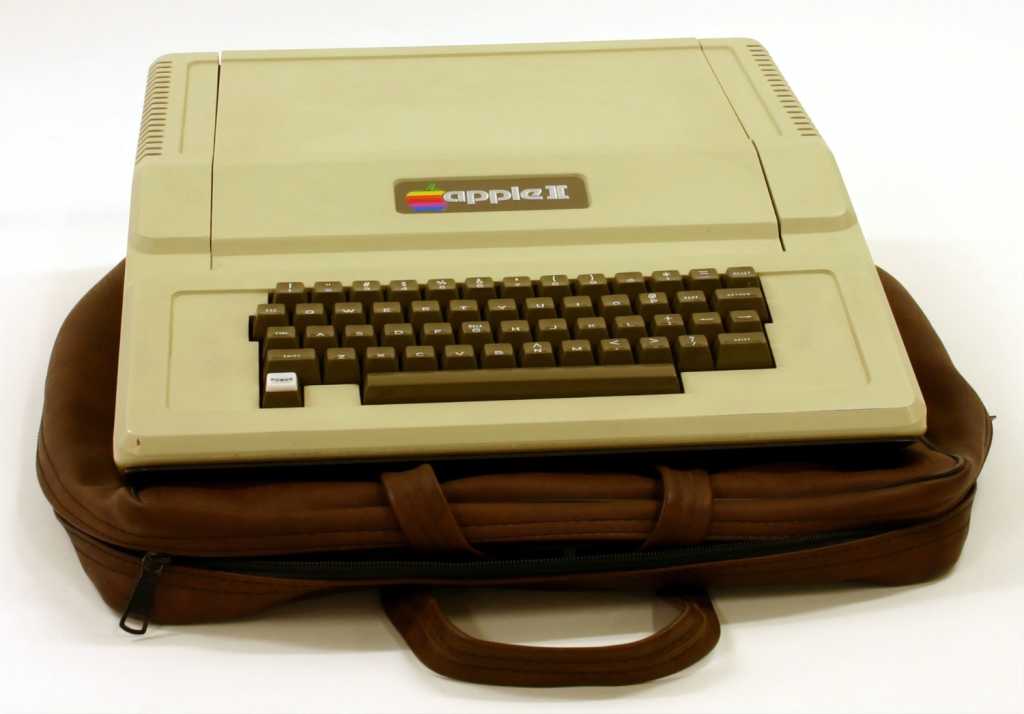 I’m no stranger to Macs. Over the past 40 years, I’ve used Macs off and about five years ago, I moved my music production to the platform. But up until recently, email, writing, spreadsheeting, and everything else were all done in Windows.

However, thanks to one app, I was finally able to cut loose the Redmond giant’s pride and joy. The Mac is now my daily computer, and it’s taken me about four decades years to get here. And as I look back on my journey to the Mac, it’s been a long, strange trip, and I thought I’d document it here. My trip began long ago, in the age of the original Apple computer… [queue the time travel effects].

Yes, I said the original Apple computer, not the Apple II, which is the fruity-labeled computer that most people of similar experience visualize. It’s the one I had my first experience with a computer. I still remember entering a darkened room with an Apple motherboard laid out on a workbench, outputting to a bare CRT. I thought it was one of the coolest things I’d ever seen.

Fairlight CMI (an early music-oriented computer), Commodore PET, IMSAI, Altair, and even IBM punch cards also formed my experiences in those years, but they aren’t germane. Which is all to say, my first Apple experience was a long time ago.

The start of this decade saw new PCs cropping up all over the place as every company wanted in on a burgeoning market, and IBM hadn’t usurped the “PC” acronym yet. The Apple II was one of the dominant machines on the market by this time, though hardly the largest player in terms of sales volume.

Yes, the Apple II was actually released in 1977. I was selling them and their associated software in 1981 when the Apple II had really gained traction. (I also sold Eagle Computer compatibles!) Besides, what most people think of today as the 1980s, really started in the late 70s. Look it up, along with Dennis Barnhart.

Because Apple II/IIe’s were expensive and there was a plethora of far more affordable, albeit less expandable (Apple II’s had card slots!) or versatile options, I personally never really considered one. I moved from the Atari 800, to a Commodore 64, to the Atari ST and Amiga, mostly because they were cheaper, but also because they had largely the same features and in some cases better ones. Especially in terms of gaming–yes, I once indulged.

Music was my real reason for involvement in computers early on. The Atari ST, which had a real rivalry with Apple in the music community, was one of the best music computers of all time–the ST had MIDI ports, for goodness sakes. I sold one to Robin Williams for his kids while bartering my time for software at a local Atari store. No kidding.

An aside: In a demo of the DEC PDP-1 at the Computer History Museum, Steve Russel, the programmer of Spacewar! relayed the fact that pretty much the first thing programmers have done with every computer ever built is “teach” it to play music and chess. My music/computer love affair is hardly unique.

When they appeared, the Lisa and Macintosh were compelling harbingers of the future. However, in what will be a recurring theme throughout this narrative, they were not realistic options fiscally. I also had issues with Apple’s behavior–more on that later.

Regardless of sentiments, I almost purchased a Macintosh to port my Atari/Amiga ear-training program (Take Note) to it. Had there not already been a similar product available for the platform called Listen, I would have. With one small exception, Listen was the better program for general education and I was reaching the programming burnout stage. I’m not stupid. Close, but no cigar.

My attitude this decade was largely the same. Apple was too expensive, too limited in the available apps, and to be honest, flailing and full of lassitude until Steve Jobs returned in 1997. PCs of the IBM type were in full flower and Microsoft was ramping up Windows to desktop dominance, Indeed, it seemed at one point as if Apple might well go the way of the Dodo. Few remember that things were actually that dire for the company. They were.

The Mac clones in 1994 made an impression, again largely because of lower costs. However, they, like many other products that have tried to imitate Apple, lacked that certain something. If you’re going to forego the je ne sais quoi, you’d better darn well be saving a boatload of cash, but the savings were rather mild.

I paid little to no attention to the Mac until late in the decade (1998) when the iMac, iBook, and faster G4/G5 Mac towers showed up. Jobs and Apple’s mojo was back, but I was still ehh–again, price. Also, there was a certain teeny-bopper flavor to many of Apple’s new offerings that didn’t have much appeal to me.

All this time I was backing up Macs for the PCWorld art department, so I was well-schooled in Mac OS (soon to be OS X, and now macOS). And yes, PCWorld was published using Macs. Adobe ruled in those days, and all the creatives wanted Macs to run Adobe Photoshop and Illustrator. It was that simple.

When Apple switched to Intel, and Boot Camp was announced, the idea of using a more stylish Mac to dual-boot began to rattle around my head. I was now a long-time Windows guy, if not a particularly enthusiastic one. Then the first modern, aluminum iMacs hit the streets in 2008 and the idea really began to percolate.

Apple also understands the music/computer romance/relationship that I have long been a part of. The company’s Core audio makes adding and aggregating audio interfaces and MIDI devices a breeze. Also enticing is Logic Pro X, which Apple offers at a price that’s laughably low compared to similarly powerful DAWs. Not to mention GarageBand, which is free!

Musicality is a selling point for me and others of my ilk, as composing and recording with computers is part and parcel of our existence. Just in case you weren’t aware, a modern computer can produce results exceeding the best analog gear I once recorded with. Including that in major studios, which themselves went digital long ago.

When the shallower-shell iMacs showed up in 2012 I was really starting to deal with a bad case of jealousy. I think they’re simply the best-looking computers ever produced. Even counting the colorful new iMacs. Tastes vary. When Retina displays appeared, I somehow knew I would wind up owning one. But buying new from Apple is not easy for the perpetually parsimonious such as me.

2022: The app that tipped the balance

While I’ve always liked macOS, and it’s a more cohesive experience, I never really preferred it over Windows 7, 8, or 10 (11 is a lot better, more Mac-like) which I still boot-camped to. I appreciate Windows’ razor-sharp screen fonts more than macOS’s WYSIWYG fonts, but other than that, I now find macOS significantly more compelling. I really, really dig the cleaner, roomier design. But there was still one roadblock to porting over my entire daily workflow.

The application that kept me entrenched in my daily Windows grind was Microsoft’s Access (née FoxPro) database, which I use for my invoice system. While Microsoft ported most of their office suite to Mac OS/OS X/macOS a long time ago, Access is the notable exception.

There was really nothing initially on the Mac that could match Access, and pricey FileMaker had no appeal to me, even after it featured up. Then I found the $35 Ninox. I won’t go into great detail about it here, but you can read more about it in my review. I switched to it full-time and love it. I’m even moving IDG’s storage testing data to it.

Ninox is the kind of app that you once could only find on Windows. It’s extremely fast, especially compared to Access on Windows, which has recently become quite slow. As I wrote in my review, “Imports, scrolling, drag & drop, image loading were all very, very quick–like blink of an eye quick.” I finally have a database app that’s as good as Access, and the final barrier to switching has been cleared

The price of switching

It’s not Apple’s base pricing that bugs me. Indeed, Windows PCs with similar components cost the same or more when you factor in Thunderbolt and the sensational high DPI Retina displays that come with Macs. These displays are not cheap and I’ve seen nothing in the Windows world (USB and HDMI) to match. (LG’s similar UltraFines are Thunderbolt-only and not a viable option for most Windows users.)

What actually disturbs my consumer sensibility is Apple charging multiple times what upgrades could/should cost. A premium is understandable, but charging two to three times the going rate? Automakers would be proud. Then there’s the fine art of upselling via strategic feature placement, planned obsolescence, and most recently, a complete lack of upgradeability and user repairability.

There’s also the company’s litigious past (suing Digital Research for its Gem Windows OS that grew from the same XParc developed technology Apple took inspiration from and licensed), labor practices, the carpal tunnel invoking one-button mouse… I could go on. In short, Apple has many of us by the shape-conscious nether regions, it knows it, and it leverages the fact. At least buy me a drink first, for goodness sakes.

All that said, I have mad respect for the people who design and work on the products, as well as the products themselves. As of the switch to ARM, it’s absolutely the best things going.

My morally bankrupt solution to the money issue? A couple of years ago I grabbed a used 2015 27-inch Core i5 iMac with 8GB or RAM and a Fusion drive for a relative song. Then, voiding the warranty and taking a chance on bricking the unit, I upgraded it myself to the Core i7-6700, 32GB of memory, 2TB NVMe/4TB SATA SSD unit that I’m writing this article on. Total coin: $1,400 (I had the SSDs already), only $200 more than a 5K display would have cost me.

Subjectively, my pet project is almost as fast as any newer Mac. In fact, nearly any processor from the last decade will seem fast for everyday work if you pair it with an SSD. Ask any one of the dozens of friends I’ve performed this upgrade for.

But I can’t finish the story without reiterating the factors that have skewed my moral compass and brought me under Apple’s Svengali-like sway. In no particular order, and unmindful of importance or repetition:

There’s only one thing about macOS that bugs me and that is the lack of support for Multimedia Transfer Protocol. MTP, found in Windows, is what allows you to pull files off of an Android phone without having the resort to a third-party utility. This seems like deliberate oversight to me. Like Apple really needs help selling iPhones.

But I’m enjoying the heck out of macOS. It’s slick as all get out, fantastic for music production, and the iMac looks first-rate on my desk. If my conscience pecks at me every once in a while, well…never say never.