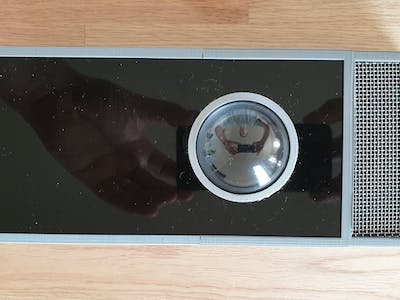 The HAL9000 computer’s “assistive” behavior in 2001: A Space Odyssey didn’t work out too well for the fictional retro-futuristic astronauts in that story. Nonetheless, its soothing voice and glowing red eye has served as inspiration for a number of real-life builds modeled after it, including this HAL9000 voice assistant by software and hardware hacker Jürgen Pabel.

The device integrates the Kalliope personal assistant program, running on a Raspberry Pi Zero 2 W, inside a case modeled after HAL9000. This case features a clear fisheye dome for its prominent eye, behind which a round 1.28 inch TFT screen lights up as a sort of red iris when activated. A quick activation clip is seen here, though the eye could in theory be, blue, green, a picture of a actual human eye, or anything else you can imagine. The system also includes a speaker, and can work with rotary encoders and/or analog buttons if you feel like implementing non-vocal controls.

The enclosure was modeled in openSCAD, and printed in a number of parts that are available for download on Thingiverse. The front faceplate was CNC’d from 3mm thick black acrylic, giving it the dark shiny look that you’d expect from an evil, or at least misguided, spacecraft computer. Given that this is based on a Raspberry Pi and readily-available software, we’ll assume there won’t be any hijinks, though you might opt not to give it control over your airlock either!