So last Monday, we reported about a Google search ranking algorithm update that touched down on May 16th – the 6 month or so anniversary of the last confirmed Google broad core update. Well, that unconfirmed Google update continued on throughout the rest of the week through today, I updated that story a bit to reflect that.

That story now has over 150 comments with complaints about the ongoing tremors and instability of the search rankings in Google Search. The ongoing WebmasterWorld thread, despite the site going through a migration and having some connectivity issues, also has a lot of chatter throughout the week.

There is a higher than normal number of complaints from affiliate sites or sites that do reviews about ranking drops. But again, hard to say if this is just impacting affiliate sites, I highly doubt it. Maybe this was a big tweak to the product reviews update?

He is the recent (past day or so) chatter I am seeing in the WebmasterWorld forums over the past 24-hours or so:

Last week was solid for me showing gains across my platform. Saturday was the lowest day which is normal. Ive kept an eye on Semrush sensor and over the last week with higher volatility things performed better.

Today the sensor shows a 5.2 and the last day we had a rating this close was on April 27. There have been no announced core updates as of late and we all know there is something that should happen soon. We’ve all been expecting it. I cannot help but feel like we are seeing the calm before the storm.

I have noticed G playing with a lot of alternative keywords over the last few weeks. Things I normally have never rated for now showing a lot of various alternates. It has been pulling from every category I have testing. This is different from running the more tried and true given query and pages I am used to seeing.

Impression volumes have been higher this week as well due to this exploratory push G has put the platform through. Actual traffic has not changed much despite this. I shall wait and see what comes of it all.

Unusually low traffic for me at the moment, more precisely since UK time 20.00 Sunday night until about 09.00 today, current traffic, 13.30 UK time, seems to be back to normal.

Anyone else have12-13 hours of much lower than usual traffic?

I’ve had more like 96,360 hours of much lower than usual traffic.

Yes, USA traffic is -53% today at 12:30pm. Home page is -63%. Total search -13% so of course it’s all coming from lower USA results, with traffic from India, Bangladesh, Russia, Nigeria, Pakistan, all zooming along.

I have had roughly a 20% increase in traffic on Sunday and today will also be about the same. Impression increase as well to match. This though comes after three or so weeks of near identical stats.

Traffic has been hammered since 28th of march! Worst part is google also limited my AdSense ads since March since working on facebook and Youtube traffic, which is 20% of my traffic! You get hit for working social it seems. Not sure why SEOS say social signals, my social facebook/youtube (24k followers facebook, 3k subs on youtube) is awesome but I haven’t seen it help the site SEO ranking wise, ever!

Also, the comments on this site, in the May 16th post, are off the charts – so scan through those.

The tracking tools, all of them, are showing spikes throughout May 16th through this week. Some tools picked it up more than others and some are showing a bigger lift today. Here are screenshots from those tools: 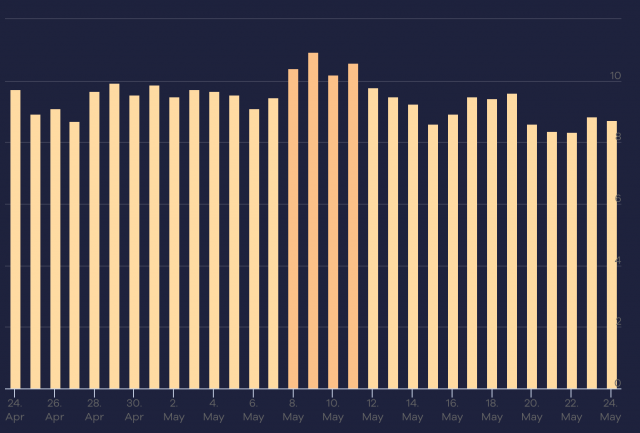 Did you notice a lot of volatility the past week and maybe something up-ticking today?