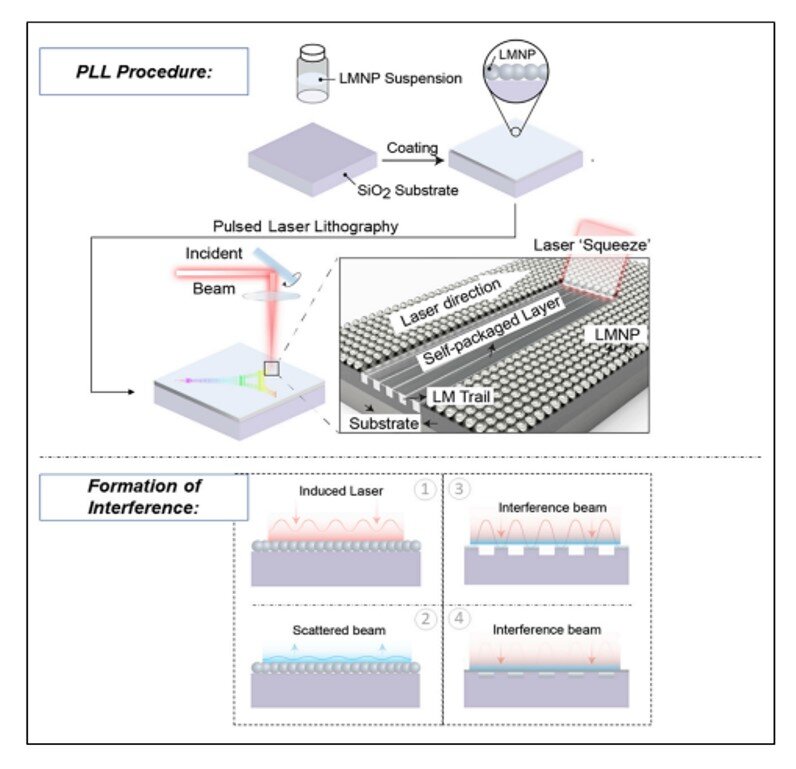 In a new report now published in Matter, Licong An, and a team of scientists in materials engineering, industrial engineering, and the nanotechnology center at Purdue University, U.S., and Wuhan University, China, described an advanced laser lithography method. The technique facilitated the formation of electronically self-protective liquid metal patterns with feature sizes in the sub-microscale, to form one of the highest resolution metal surface patterns to date. The unique structure and robust patterns offered electrical functionality in spite of external damage. Such high-resolution, electrical, self-protective materials are suited for next-generation nano applications.

The field of high-density electronics is of great significance in materials engineering, and is suited to form high-density patterns for integrated electronics in harsh environments. Materials and industrial scientists have used room-temperature gallium indium (EGaIn) to develop high-density patterns due to their distinct properties including high fluidity, high electrical conductivity and high deformability. Research efforts to develop high-resolution liquid metal patterns are based on lithography patterning, among a diverse range of methods, with broad appeal in electronic applications across liquid metal batteries, microfluidics and energy harvesting devices.

In this work, primary author and research associate Licong An, who is presently at the materials engineering department at Purdue University, described the method as a “practical and scalable technique to fabricate self-packaged, high-resolution liquid metal patterns.” The team intend to “practically integrate electric chips for use in harsh environments.” The scientists primarily introduced the pulsed laser lithography method in this work to develop 3D liquid metal patterns with sub-micron level resolution, protected via a mechanically stable oxide package shell. Licong An highlighted the significance of this approach: “For the first time, the one-step lithography method can be directly used to pattern liquid metal,” he said.

He further defined the practical implications of the method “due to the high surface tension and flowing patterns, when compared to traditional lithography patterning. This is the first time that a lithography method is used to directly pattern liquid metals.” The work described here is therefore “a first effort to introduce advanced laser lithography as a one-step process to directly generate highly efficient liquid metal patterns,” he said.

The research team summarized the method of developing high-resolution liquid metal patterns in four steps. At first, they sprayed a liquid metal nanoparticle (LMNP) onto a substrate to form an LMNP thin film. Then focused the pulsed laser beam on the thin film surface, where the incidence beam scattered due to its surface nanostructure, followed by ablation of the LMNPs and substrate where the peak energy intensity reached an ablation threshold. The laser-induced shock acted as a squeeze to generate pressure on the liquid metal particles and the team used laser energy as the main parameter to control the formation of high-resolution patterns. The team regulated the ultrafast heating and cooling rate by laser, to generate a 3D uniform oxide layer on the top surface of the 3D architecture, with boosted mechanical stability, for high stability in the face of exterior damage.

The research team developed the liquid metal nanoparticles, according to previous reports, by ultrasonically dispersing bulk EGaIn alloy in ethanol, to form LMNPs via molecular self-assembly, with an average diameter of about 200 nm. A thin oxide layer also typically formed rapidly during the sonicating process to hold the metal particles to spherical shapes. An et al. spray-coated the as-prepared LMNPs onto a silicon-based substrate to form a thin-film of nanoparticles and kept the thin-film nonconductive, while using a fiber laser source to produce the nanopatterns. Licong An highlighted the mechanism of the advanced laser lithography technique, “the method could induce a high laser pressure, to act as a squeeze shock to generate pressure on the liquid metal particles.” He continued, “when the squeeze goes by, the 200 nm particles are extruded to a 20 nm robust oxide shell, which acts as a robust package to protect the liquid metal patterns underneath from being damaged.”

Materials characterization and a breakthrough

The scientists confirmed the formation of laser-induced periodic liquid metal patterns via energy-dispersive X-ray spectroscopy methods and elemental mappings to show the presence of silicon, gallium and oxide, with liquid metal imprinted on the underlying substrate. The breakthrough laser technique also broke the laser optical limit. Licong An said, “Everyone knows that there is a direct correlation between the liquid metal pattern resolution and processing tool size, our breakthrough laser lithography broke this common knowledge, to generate patterns with sub-micron resolution for the first time.”

He believes that “the patterns could reach a much higher calibration if a laser with a smaller wavelength is used.” The team also simulated the formation of nanopatterns and emphasized the one-step process of direct liquid metal pattern deposition; another significant feature of the study. They combined a range of experimental methods to characterize the proprietary elemental composition of the oxide package shell covering the liquid metal nanopatterns with boosted mechanical properties—compared to pre-existing conventional methods of liquid-metal pattern generation.

In this way, Licong An and colleagues developed electronically self-protective, high-resolution liquid metal patterns via a pulsed laser lithography (PLL) method to create one of the highest resolution liquid metal patterns to date. The team envision applications of the new material in next-generation nanoscale practices, with high integration densities, suited for demanding applications. The research team comprised of key collaborations between the primary author and Research Fellow Licong An, and interdisciplinary colleagues, including Professor Gary J. Cheng, a Fellow of the American Association for the Advancement of Science.