Engineer Hacks and Redesigns a Dead DT71 Tweezer DMM, Saving It From a Landfill 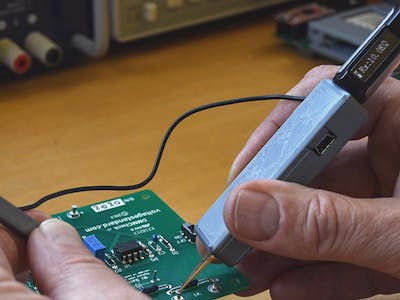 With just a bit of 3D printing and rapid disassembly, electronics engineer Dan Julio rebuilt a broken DT71 Digital Tweezer Multimeter and made a few usability improvements over the original design.

Here is a basic overview of the tool before describing Julio’s reverse engineering efforts and replacement parts. The DT71 Tweezer DMM is a handheld device made of two pieces. It costs around $70 USD.

The top piece contains a microcontroller, a 90×16 OLED, and an accelerometer to tell when to flip the display for right- and left-hand operation. In addition, the module enables basic multimeter and passive component measurements.

The bottom piece contains the tweezer probe tips. Inside the arms are two lithium batteries and a simple charging circuit.

A TRRS plug (top) and jack (bottom) connect the two. A custom cable comes with the DT71 that sits between the two pieces while connected to a USB-C cable. That cable charges the batteries in the lower half while providing a way to upgrade the top half’s firmware. With only four connections available, the 3.5 mm pins have multiple functions.

When Julio’s DT71 started giving connection errors, the display unit seemed to function correctly when alone. So, the investigation began with the tweezers.

After breaking multiple plastic pieces and a flex PCB cable, it became clear this DT71 would not come back together. But first, some reverse engineering happened.

While drawing a schematic by hand, Julio noticed that the TRRS connections serve multiple functions. For example, depending on if the USB cable is connected, one of the rings is either a USB data line or the probe’s positive tip.

Since the original tweezers were now in multiple difficult to re-assemble pieces, Julio set out to create a 3D-printed replacement. After scavenging the charge circuit, batteries, TRRS connector, and probe pieces, Julio soldered them to a piece of protoboard. Additionally, a new USB-B Mini provides a charging path that does not require the proprietary cable.

The inspiration for the redesign came from a 1970s-era HP 970A handheld multimeter. You can read more about this device here.

If you find yourself with a broken DT71 and want to attempt a similar repair, check out this project page on hacking a dead DT71. The page also contains a zip file with traditional STLs and OpenSCAD descriptions for the 3D-printable parts.