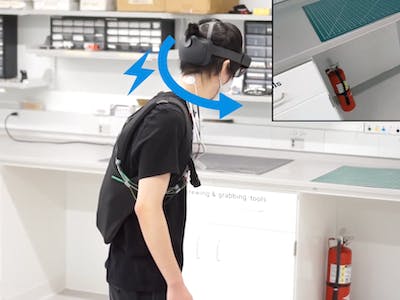 There’s nothing more frustrating than trying to find misplaced items around the home. Keys, remotes, glasses, phones and even articles of clothing seemingly become lost the moment we reach for them. Some habitual offenders rely on RFID tags or other stick-on devices that work with an app that helps find those misplaced items, while others use auditory attachments that emit tones to zero in on their location. A group of engineers from the University of Chicago’s Human Computer Integration Lab has taken item location to another level by designing a wearable device that turns the wearer’s head in the direction of the lost objects.

The researchers describe their method of finding lost items as Electrical Head Actuation (EHA), which is precisely what it sounds like – electrical stimulation contracts the muscles in the neck to turn the head up, down, left and right. The electrical stimulation isn’t intense, there’s no debilitating electrical shock, and it won’t break the neck with jarring movement; rather it’s akin to a medical TENS muscle rehabilitation unit to relieve pain and stiffness.

The system features a HASOMED RehaMove3 medical-grade muscle stimulator, which is carried in a backpack. A series of electrodes utilize four channels for head actuation and are placed accordingly on the neck to generate movement, including tilt, pitch and turning. The system is paired with a tracker and begins turning the head the closer the user gets to the object in real-time.

Don’t expect the system to be rolled out soon or bundled with any new trackers, as it only serves as a foundation for future applications requiring automatic head-tracking. To that end, the team has paired the system with an HTC Vive and a HoloLens for an immersed gaming experience, including boxing. This would bring a new approach to haptic feedback gaming where players take damage or navigate virtual environments where vision is obscured.