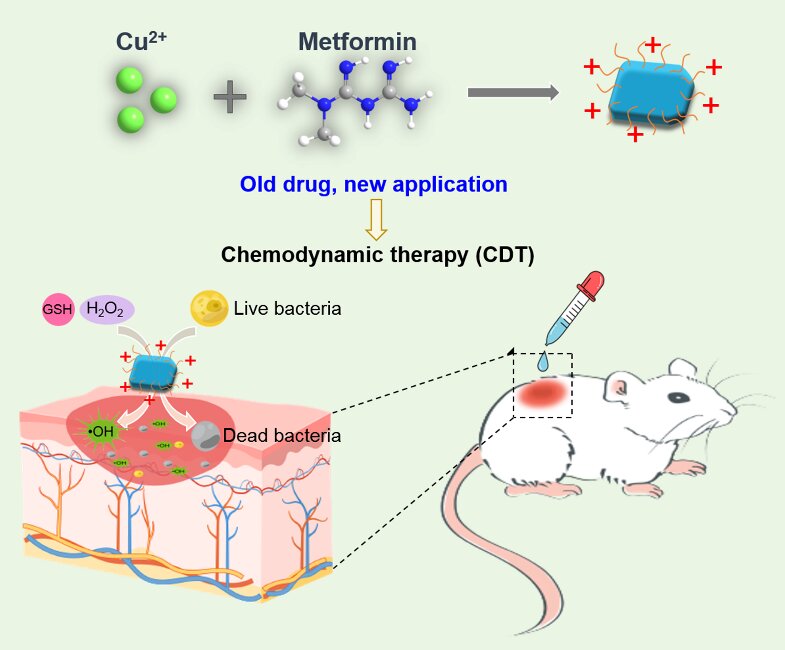 Old dogs may not learn new tricks, but old drugs can, according to a research team based in China. The collaboration found that Metformin, a small molecule drug that has been used to treat type II diabetes for more than 50 years, can improve the efficiency and efficacy of antibacterial treatments for quick wound-healing in mice.

They published their results in Nano Research.

“The abuse of antibiotics has led to serious bacterial resistance, with about 1.27 million deaths in 2019 due to multidrug-resistant bacterial infections,” said co-corresponding author Linlin Li, professor at Beijing Institute of Nanoenergy and Nanosystems, Chinese Academy of Sciences.

According to Li, chemodynamic therapy has attracted significant attention since it was developed in 2016 as a potential companion for cancer therapies, bacterial inactivation and infectious disease treatments. The therapy uses nanomaterials containing transition metals that react with hydrogen peroxide to produce hydroxyl radical, which weakens and kills diseased or infected cells, making them more susceptible to direct treatment.

“The reaction generates toxic hydroxyl radical, which destroys the cell surface structure and causes the cell to leak its internal components,” said Li. “The nanoagents only catalyze hydroxyl radical generation at the site of tumor or inflamed tissues, so the therapy is highly specific to reduce off-target toxicity. Bacterial infections also tend to be accompanied by microenvironmental alterations that are favorable for chemodynamic therapy.”

The researchers set out to improve the antibacterial power of a nanoagent, while also lowering the toxicity to healthy cells—a risk that can be difficult to control due to the invasive nature of infection.

The researchers stirred metformin with copper chloride to form nanosheets whose surface was capped by the metformin molecules—enhancing the nanoagent’s positive charge and strengthening the antibacterial effects, according to Li.

In vitro tests revealed a biocompatible nanoplatform with a better dispersity than a nanoagent without metformin, and higher antibacterial activity.

“Compared to previous reports that used metformin as antibacterial agent alone, excellent antimicrobial effects were achieved in our experiments using lower concentrations of the nanosheets with very short action time,” Li said, who noted that they are also studying the effects of metformin in other biomedical applications to develop more therapies.

To further test the metformin-capped nanosheets, the researchers established a model of staph infection in the skin of mice. The mice were divided into five groups, each of which received a variation of treatment. The group that received both the metformin nanosheets and additional hydrogen peroxide to further the production of hydroxyl radical had the fastest wound healing rate, with complete closure by the day 12 of treatment.

“This work not only develops an efficient chemodynamic therapy nanoagent as an alternative antibacterial agent for treating skin wound infections, but it also provides ideas about discovering new uses for old drugs,” Li said.