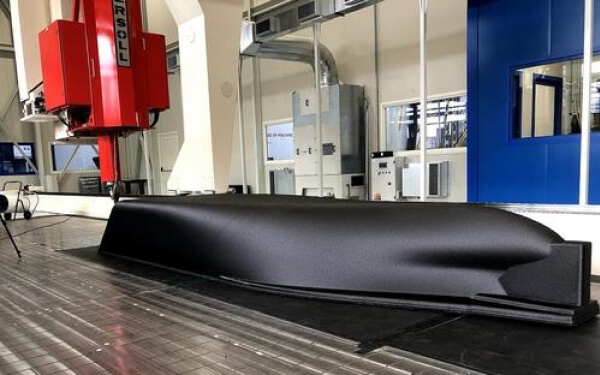 The shipbuilding process, like aerospace development, often requires the construction of scale models of the vehicle in question in order to validate certain aspects of the design before splashing out on a full scale manufactured product.

You have seen this with aircraft in wind tunnels, where the geometric model is used to represent the aerodynamic surfaces on an aircraft in flight. Similarly, ship models of various scales are used for a variety of fluid dynamic analyses in various fluid testing facilities.

With ships, the models can take around 3 weeks to build out of wood, which is typically carved up via CNC.

South Korean shipbuilder Daewoo Shipbuilding & Marine Engineering Co. has teamed up with Ingersoll to utilize thermoplastic additive manufacturing to produce these models, resulting in a 40 percent reduction in build time.

You see the 10-meter long ABS model being printed in the image below.

Daewoo Shipbuilding is the world’s fourth-largest shipyard by order backlog and is one of the “big three” shipbuilders in South Korea, along with Hyundai and Samsung. Yes, they build ships as well as TVs.

The ship model is a 10 meter twin-skeg ship made of (ABS), which will be tested in the Daewoo research lab in Siheung, just outside of Seoul. In particular, the company is interested in testing navigational aspects of the scaled-down ship including speed, ship motion, and propulsion efficiency.
Another advantage of using ABS for production is the recyclability of ABS. If you want to use ABS again, you just chop it up into pellets and extrude it again. Recycling wood is not so simple, so use of plastic here is contributing to the circular economy.

For those wondering, a “skeg” is part of the hull that sits underwater between the hull, sternpost and keel. Typically it houses the shafts for transferring notation from the engines/drive to the outboard propellers, as you can see in the picture below. A twin-skeg has two of these, housing two propellers and shafts side by side. The twin-skeg configuration offers advantages which are favorable in cargo and tanker vessels which require low draught or high beam-to-draught ratio.

“The breakthrough marks a key paradigm shift in manufacturing model vessels,” said a spokesperson for the South Korean shipbuilder.

“It is also an example of our efforts to expand the new mantra of digitalization to all shipbuilding areas.”

Daewoo states that it’s the first 3D-printed ABS model ship in the world that will be used in ship prototyping. Just as a reminder, it is not the first 3D printed functional boat in the world, as we have looked at plenty of those before here, and just last week here.

Does that make the Daewoo boat the new record holder for largest printed boat?