Cricket Game on a PCB 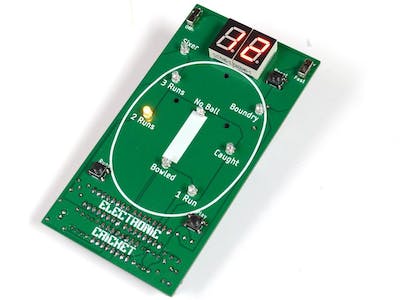 While unfamiliar to many readers, cricket is a truly epic game, which vaguely resembles baseball and can take place over nearly a week of play. Lonesoursurfer wanted a quick and portable version of the game that he could use anywhere, and came up with a fun-looking PCB amusement.

In his typical style, ‘surfer’s build uses no microcontrollers, but instead takes advantage of a number of small components, like resistors and capacitors, as well as ICs including two 555 timers. Circuitry is divided up between the scoreboard and gameplay LEDs that function in a largely independent manner

To play the game, the participant holds down the play button to start the on-field LEDs moving. When the button is released, these LEDs stop, which determines whether the player is out, or if any runs have been scored. A switch determines whether the game proceeds in fast or slow mode, which largely determines how much skill is involved. The player keeps track of how many outs he has left, and pushes the run button to add up the score on a pair of seven-segment LEDs.

The PCB is a typical green color, which here is evocative of a cricket playfield and a white silkscreen shows more gameplay details. You can see an overview of the build in the video below, and the schematic/PCB details are available for download. An earlier version of this game is also up for your perusal, which was done without a PCB and housed inside a battery tester case. It’s less refined for sure, but quite awesome from a modding point of view!