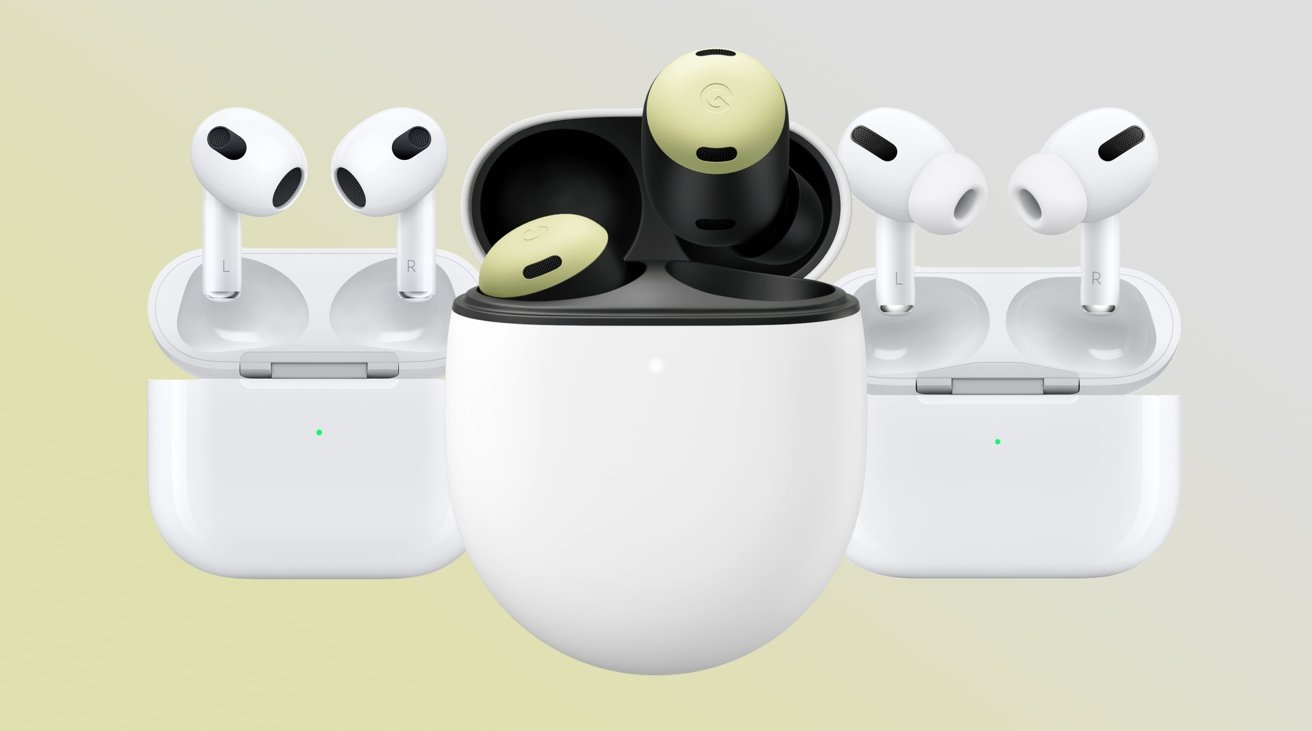 During its Google I/O developer event, the search giant introduced an update in its Pixel Buds lineup. The Pixel Buds Pro are Google’s attempt to take on Apple’s AirPods Pro, complete with active noise cancelation, aimed at a primarily Android-based audience.

The latest release also boasts considerable battery life and several other tricks that could make them a compelling option for Android smartphone users.

Here’s where they stand against Apple’s third-gen AirPods and the AirPods Pro.

The AirPods and AirPods Pro have very well-known forms: a white earbud with dark venting and a long descender that drops down from the ear. The aesthetic is famous and unmistakable and is undoubtedly a wearable status symbol for some users.

While AirPods are designed to sit in the ear cavity, the AirPods Pro includes silicone tips in its design. The latter is helpful for not only keeping the AirPods Pro in place during workouts but also helps facilitate the ANC functionality.

Google’s Pixel Buds Pro are not that much different from the Pixel Buds A-Series from 2021, which consists of a cylinder bearing the Google logo and a sticking-out element with a silicone tip to slide into the ear canal. There are no extra sticking out elements, with the entire unit jutting out from the folds of the ear itself. 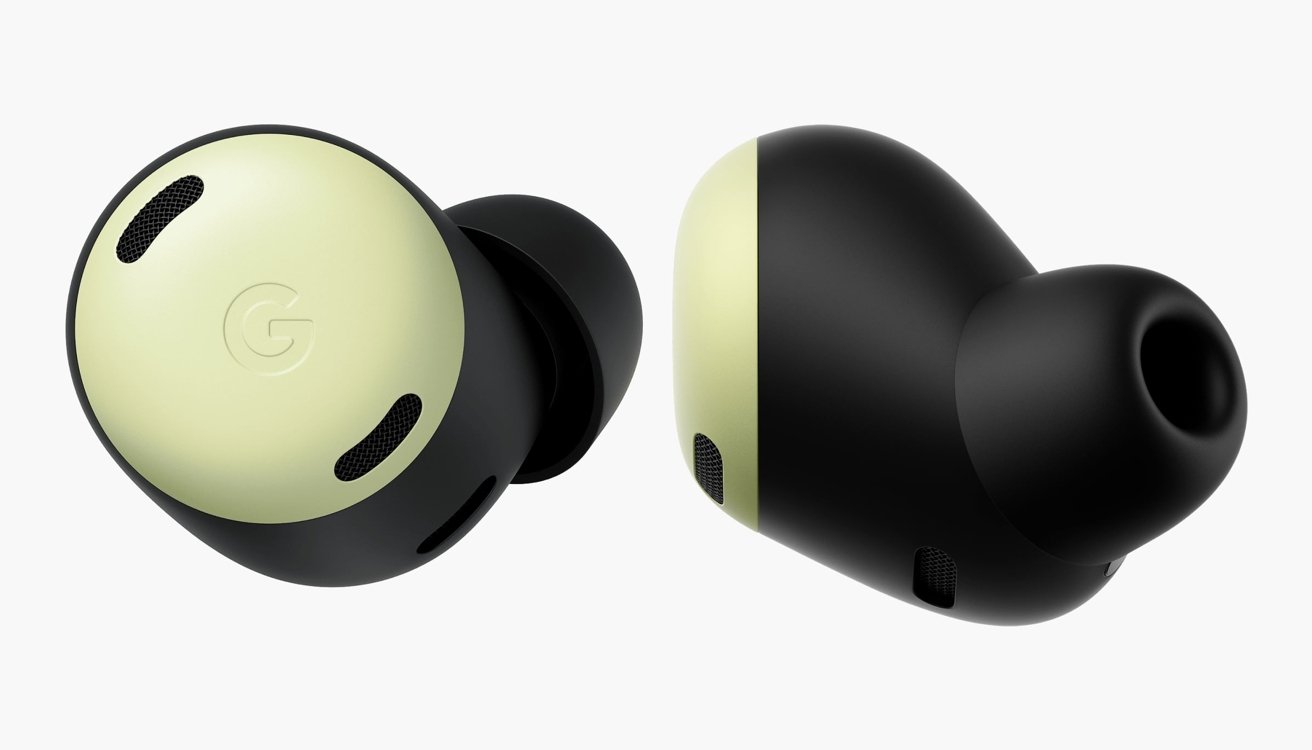 The Google Pixel Buds Pro are cylindrical with only the earpiece sticking out from its core shape.

Those ear tips are said to mold to the user’s ear for a comfortable fit. To help reduce pressure, sensors can actively measure the levels in the ear canal, relieving it if necessary.

The chunky design does mean Google’s Pixel Buds Pro are a fair bit smaller than both of Apple’s earphones. At 0.87 inches by 0.88 inches by 0.81, the round element takes up very little space overall.

All three earbuds are said to include IPX4 sweat and water resistance, enabling them to easily handle the occasional workout routine or light rain.

Of the two product families, Google’s is the most colorful. Apple offers the default white as its only option, while Google provides Coral, Fog, Charcoal, and Lemongrass highlights to otherwise black earbuds.

Powered by Apple’s H1 chip, the AirPods offer features such as Spatial Audio with dynamic head tracking, an adaptive EQ, automatic switching between devices, and the usual “Hello Siri.”

The AirPods Pro go further, adding Active Noise Cancellation as a feature to help block out the environment. To go with this, the Transparency mode can let in some sounds to the user’s ear, giving them some awareness of their surroundings or holding a conversation while still blocking out other audio.

The design of the AirPods Pro also includes a vent system to keep the pressure in the ear canal even, rather than adding pressure via the presence of a silicone tip.

Both are controlled via the descending tails, with a series of taps and holds able to instruct the AirPods or AirPods Pro to answer calls, manage music playback, activate Siri, or enable ANC or Transparency modes.

Recordings are handled by dual beam-forming microphones, including an inward-facing microphone to help with summoning Siri. 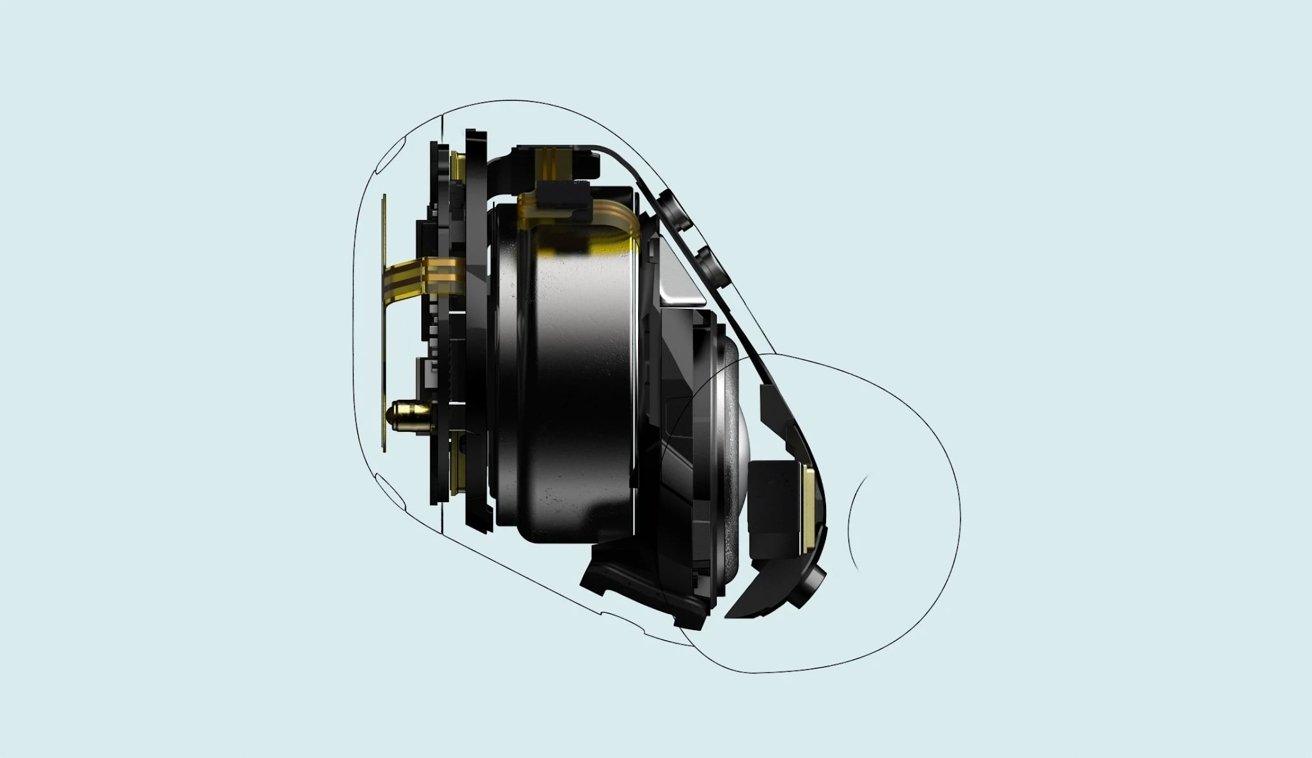 New to the Pixel Buds Pro for 2022 is its own ANC feature, using “Silent Seal” to maximize the blocking out of external noise. Naturally, there’s a Transparency mode for environmental awareness.

With Android 13, Google’s also introducing its take on Spatial Audio, though that’s not available until Android 13.

This is a system brought into play by a custom processor and custom algorithms and speakers, with the latter using 11mm speaker drivers. A full five-band EQ is available for high levels of customization, though there’s also a Volume EQ to adjust the tuning as the user changes the required volume.

Each earbud includes a trio of microphones, along with a voice accelerometer that’s analogous to Apple’s speech-detecting accelerometer. The mics use beamforming and wind-blocking mesh covers to pick up the user’s voice clearly, which can be used for calls and hands-free Google Assistant queries.

The buds can be tapped and swiped for calls, music, and assistant control, with there also an IR proximity sensor for ear detection. Accelerometers and a gyroscope are also built into each earbud.

All three include a charging case, which can recharge the earphones while storing them. The case can help top up the battery life of the accessories and extend their utility throughout the day.

Apple’s cases are certainly more oblong than Google’s version, which is more oval and egg-like. For all cases, flipping open the top reveals the earbuds and bud-specific holsters for recharging. 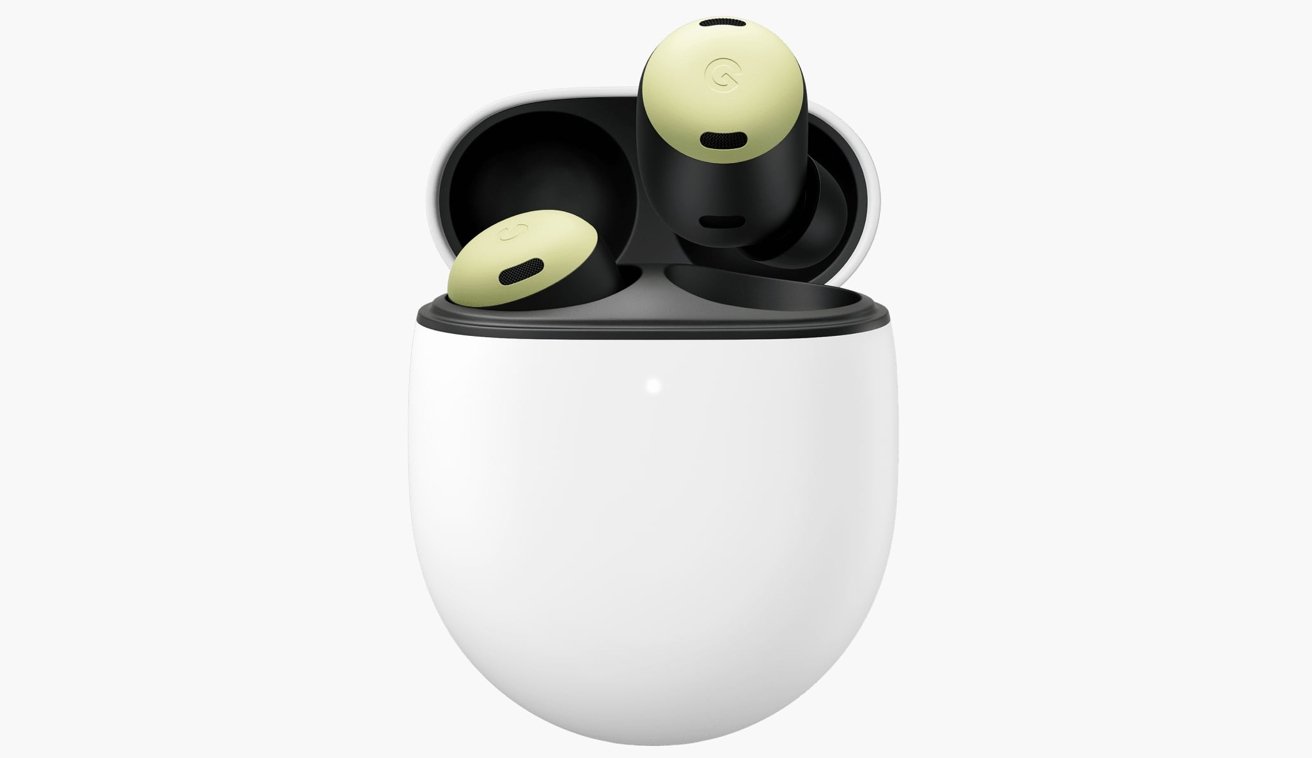 The Google Pixel Buds Pro case isn’t as boxy as those used by AirPods, but it is just as white.

Google also offers the heaviest case of the group, at 2.2 ounces versus 1.61 for the AirPods Pro and 1.34 ounces for the third-gen AirPods case.

All of the cases have wireless charging support, with Apple’s using MagSafe while Google opts for Qi-compatible chargers. Apple’s cases use a Lightning port for wired charging, whereas Google opts for USB-C.

Externally, all three cases are the same shiny white. Opening them up, Apple keeps the interior of the case white, while Google goes for a dark grey.

Battery life is an area Google has undoubtedly improved in its Pixel Buds Pro and does so at such a level that it could put Apple to shame.

The Google Pixel Buds Pro offers up to 7 hours of listening time with ANC enabled. Without ANC, that time rises to a massive 11 hours from a single charge.

With the recharging cases included, the AirPods can last for up to 30 hours of usage, while Apple says the AirPods Pro can go to “more than” 24 hours. Google claims its earphones can manage up to 31 hours of playback in optimal conditions.

As part of the update, Google’s also introducing multi-point connectivity, so the Pixel Buds Pro can automatically switch between devices, including iOS and Android hardware. This is a feature Apple has offered for quite some time, so Android users are certainly catching up on this front. 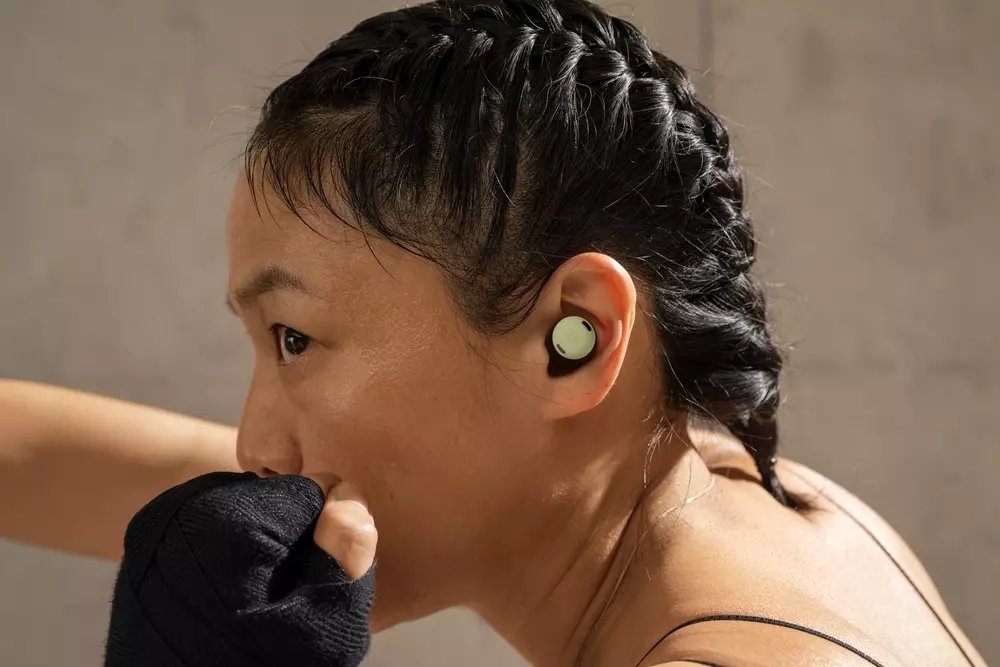 There’s sweat and water resistance to IPX4 across the board.

In terms of actual connectivity, all three earbuds use Bluetooth 5.0 to connect to devices.

Google says the Pixel Buds Pro can connect to any device using Bluetooth 4.0 or later, including iOS devices, Android hardware, tablets, and notebooks.

Apple’s compatibility lists cover a considerable history of hardware, so practically anything made since 2012 will almost certainly work with the AirPods and AirPods Pro, so long as users keep their devices up to date.

You can connect AirPods to other Bluetooth devices, including Android smartphones, but you won’t necessarily get the same level of integration as you would do connecting it to an Android device. Similarly, you will anticipate deep integration with Android for the Pixel Buds Pro but more basic functionality when used on iOS.

Apple sells the third-gen AirPods for $179. Engraving of the case is available at no extra charge.

The AirPods Pro are priced at $249. Likewise, the case can be engraved at the time of purchase.

In its four color options, the Google Pixel Buds Pro will cost $199 when it becomes available to preorder on July 21.

Google’s advancements with its Pixel Buds line have brought it to an obvious result: competing with the AirPods Pro. Google’s not hiding that fact at all, with the feature set and even the “Pro” suffix closely aligning with Apple’s premium personal audio option.

You certainly can’t fault Google for trying, as it’s attempting to provide Android users something as similarly-featured and valuable as the AirPods Pro. 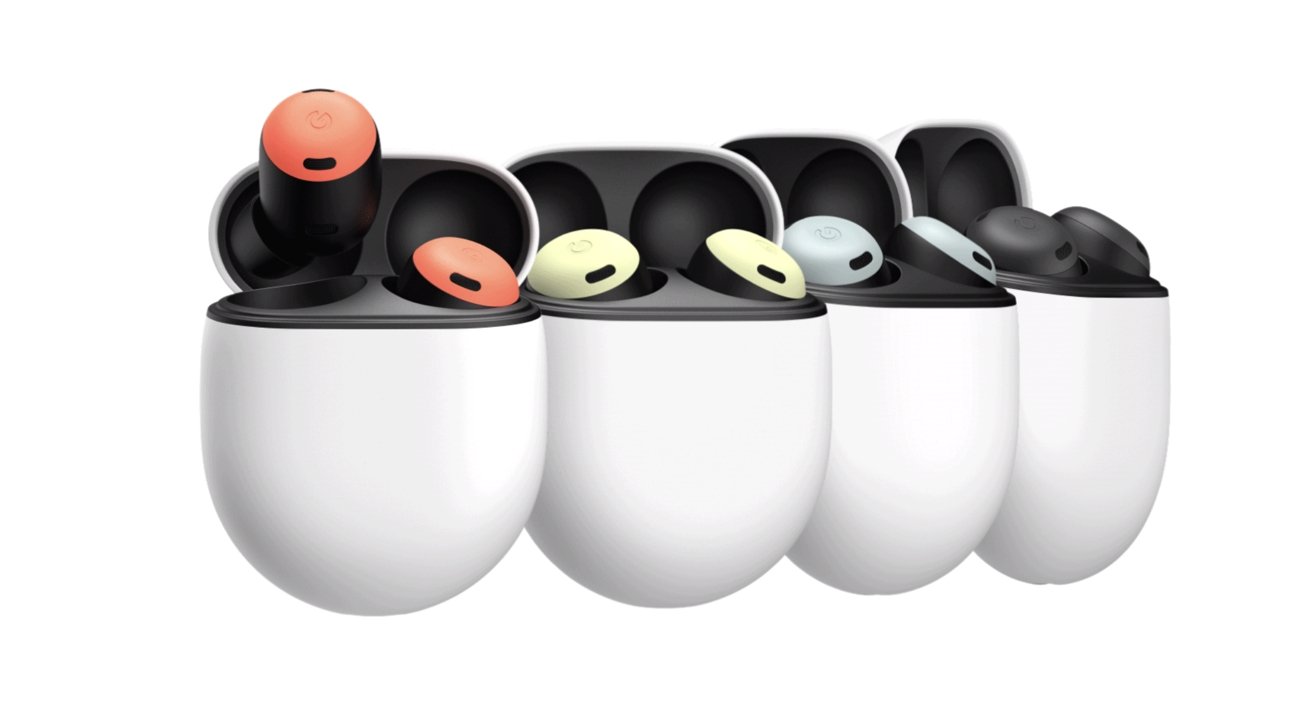 One thing that Google certainly offers users is a choice of color.

In many ways, Google meets Apple’s rival version in features, and in the case of battery life, surpasses the incumbent top-of-the-range model.

Add in that the $199 price tag for the Pixel Buds Pro is closer to the cost of AirPods than the AirPods Pro, and it seems like Google is onto a winner here.

Are Google’s Pixel Buds Pro primed to overtake the AirPods Pro in the marketplace? Probably not for iPhone users, but for the Android faithful, Google has seemingly accomplished its mission.

Google will open preorders of the Pixel Buds Pro from July 21 for $199 via its online store. A release date hasn’t yet been confirmed at the time of publication.