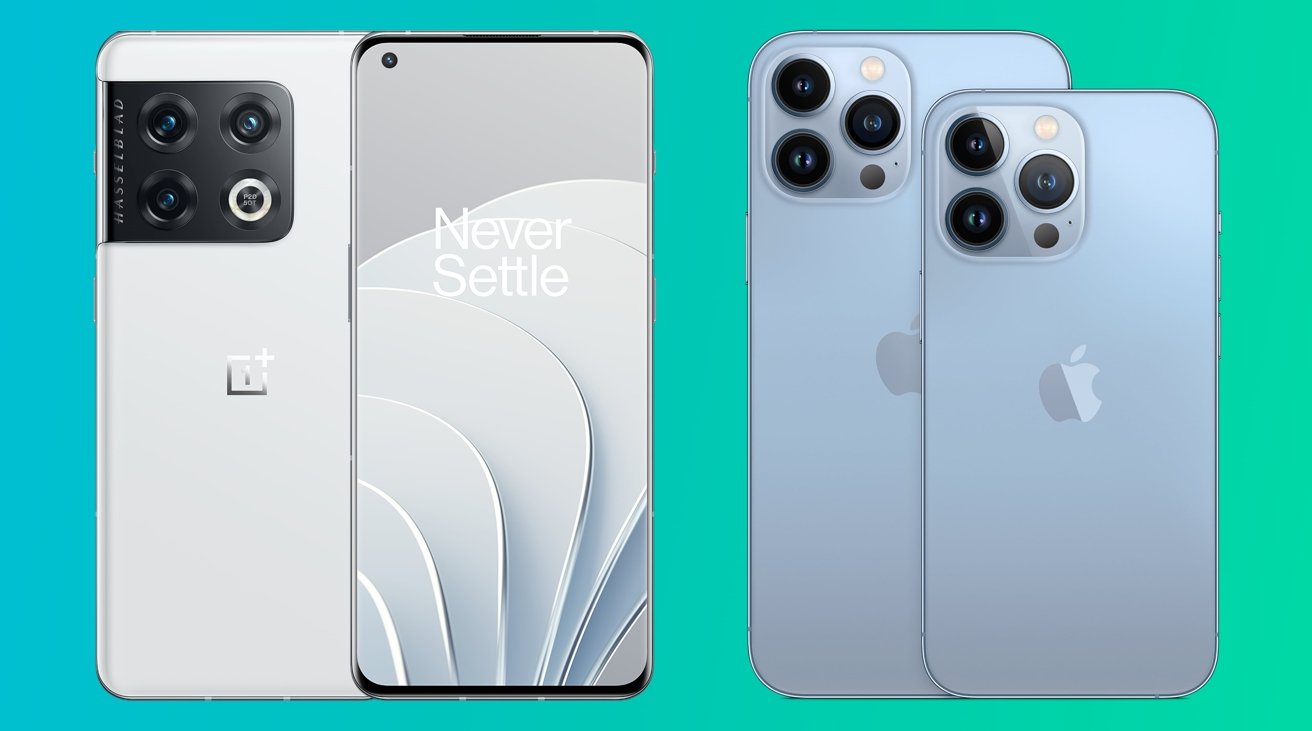 We got our hands on the new OnePlus 10 Pro and compared to Apple’s latest iPhone 13 Pro line for this in-depth showdown.

After going on sale in China, OnePlus used Mobile World Congress to reveal it is bringing the OnePlus 10 Pro to other regions worldwide. It intends to release the model in North America, India, and Europe by the end of March 2022, among other expansions.

The OnePlus 10 Pro is the outfit’s newest flagship model, with its headline features surrounding its fast-charging capabilities and its association with famed camera firm Hasselblad.

The various enhancements made to the model in the latest generation, coupled with the “Pro” suffix, brings the OnePlus 10 Pro directly in competition with Apple’s iPhone 13 Pro and iPhone 13 Pro Max. Looking at the numbers, OnePlus may offer quite a compelling argument for its model.

The OnePlus 10 Pro fits somewhere between the two iPhones regarding dimensions. It’s taller than the Pro Max at 6.42 inches, but it’s midway between the two at 2.91 inches, making it a seemingly narrower device. 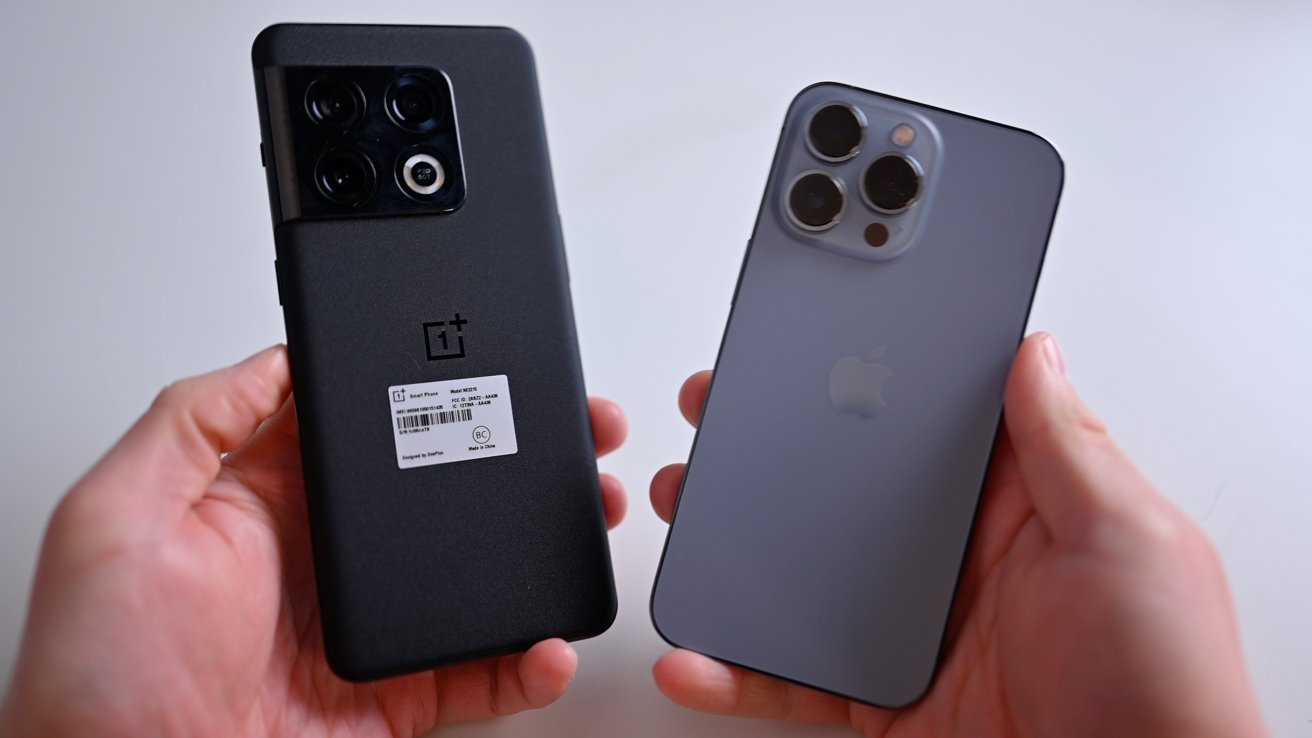 However, OnePlus loses out here by being 0.34 inches in terms of thickness. When reading the number, it doesn’t seem like much, but that equates to a 13% difference in thickness that you’d undoubtedly notice with your hands.

Though thicker, OnePlus has made its device lighter at 7.19 ounces, against the iPhone pair with 7.19 ounces and 8.46 ounces, respectively. This is probably down to Apple’s preference for stainless steel and OnePlus opting for aluminum.

Both Apple and OnePlus have opted for OLED screens, with Apple’s branded as a Super Retina XDR screen while OnePlus calls its version a “Fluid AMOLED with LPTO.” 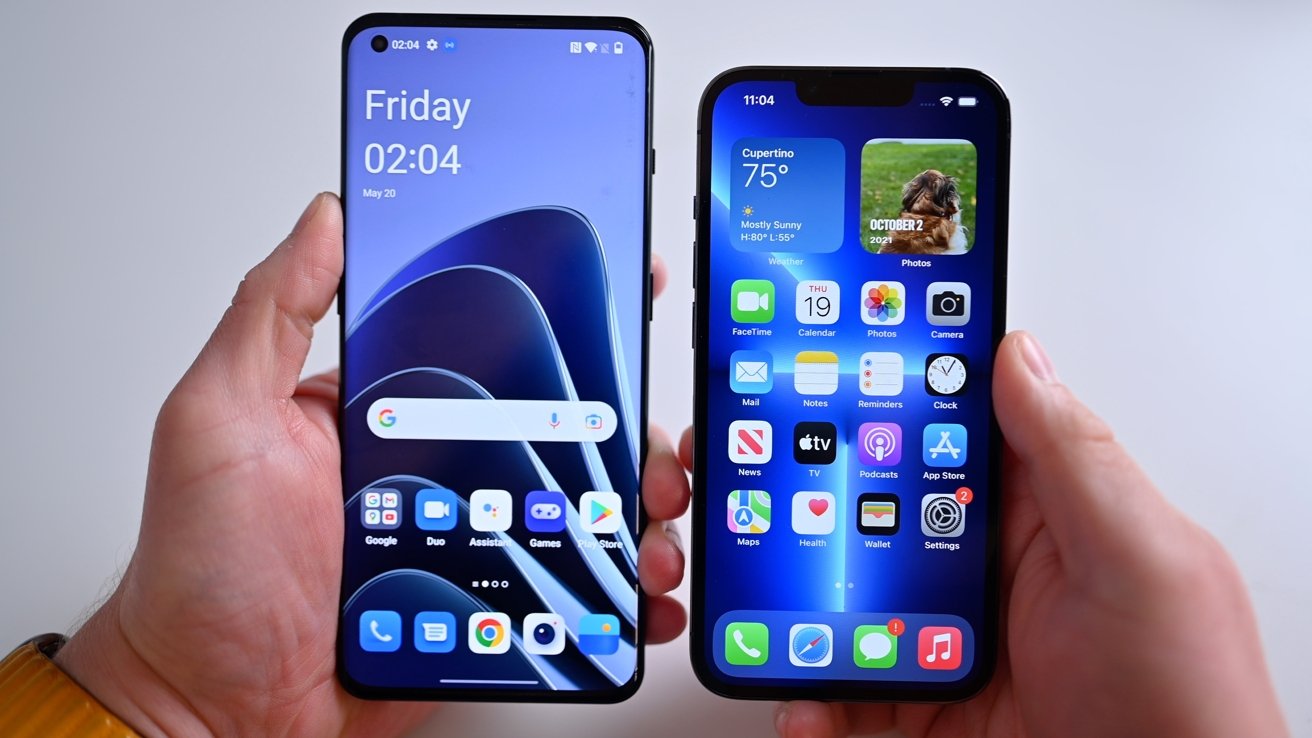 Displays on the iPhone 13 Pro and OnePlus 10 Pro

There’s a second similarity in features, namely refresh rates. Apple’s ProMotion display enables a refresh rate to automatically vary between 10Hz and 120Hz, depending on the viewed content.

The OnePlus 10 Pro does the same auto-adjusting refresh rate trick; however, it has an increased range to as high as 120Hz but as low as 1Hz. OnePlus also claims the technology lets its device use less power than other 90Hz and 120Hz-capable displays. 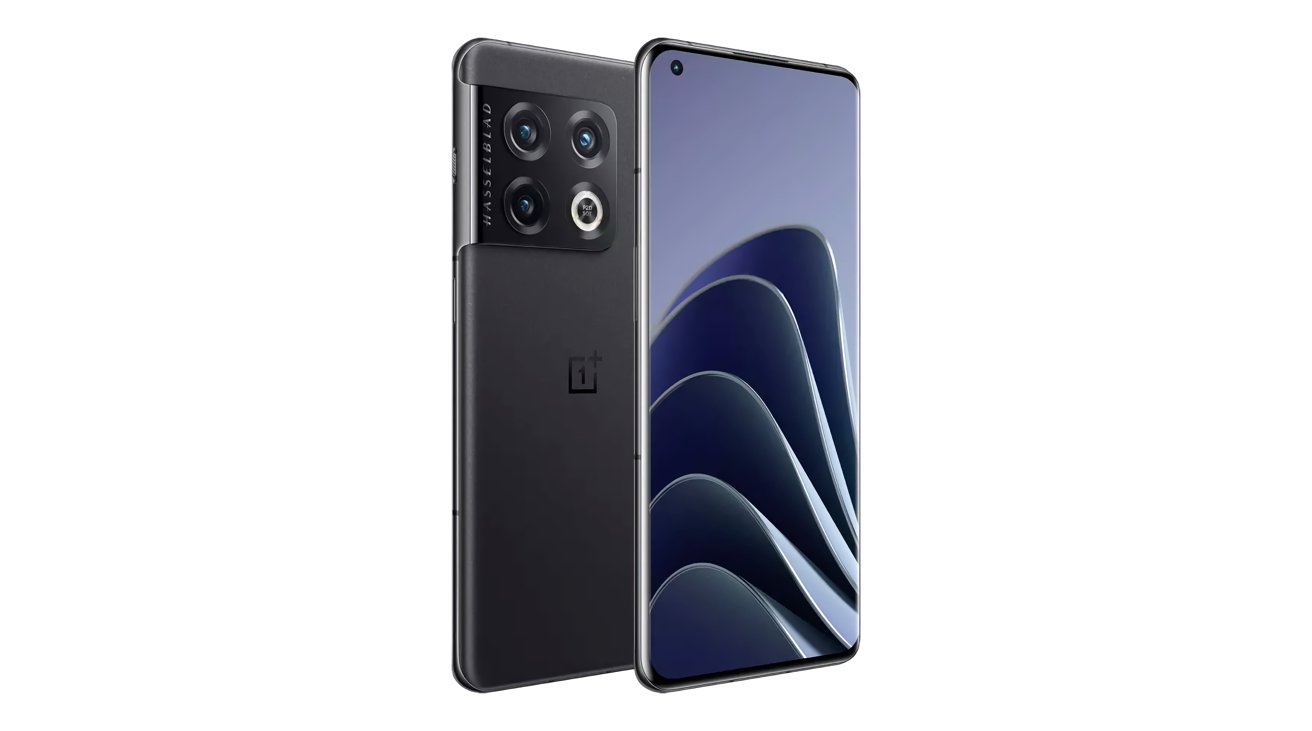 OnePlus’ display has a ProMotion-like adaptive refresh rate, and a punch-hole camera.

OnePlus also claims to be the first in the smartphone industry to use Dual Color Calibration. This means that, instead of calibrating for one specific level of brightness, OnePlus calibrates for two different levels, high and low.

In theory, this should give the OnePlus display a more consistent color representation across a wide variety of brightnesses.

As an aside, the display of the OnePlus 10 Pro does hide a component absent from the iPhone. OnePlus includes a sub-display fingerprint reader for biometric security.

Though this may not necessarily be as useful as Face ID, it does help OnePlus avoid cutting into the display with a large notch by using a punch-hole camera instead.

While Apple prides itself on offering consumers excellent photographs and videos using the rear cameras, it does so typically by improving the quality of the image rather than boosting the resolution. In a match-up against the OnePlus 10 Pro, the decision to stay low on resolution may not be on Apple’s side. 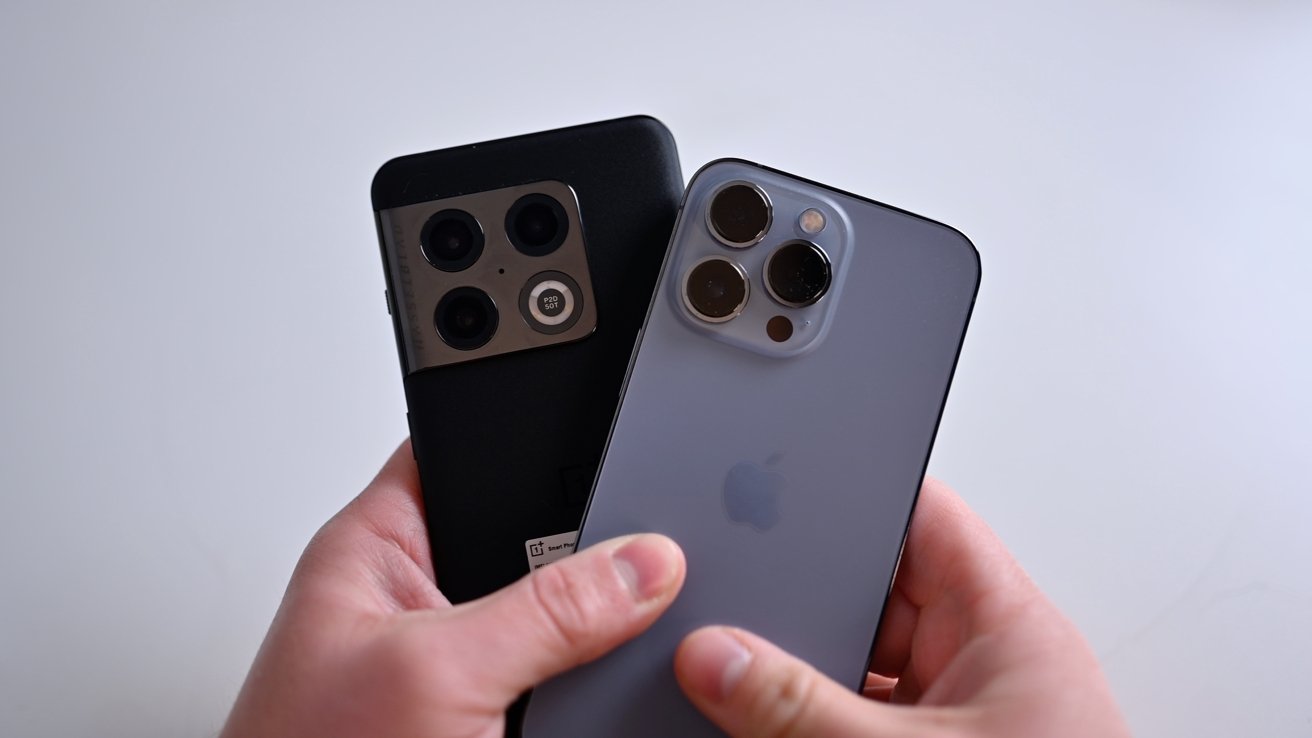 Apple uses 12-megapixel sensors for the ultra-wide, wide, and telephoto cameras on the back of both the Pro and Pro Max. You do get niceties including optical image stabilization for two sensors, as well as Sensor-Shift OIS for the Wide sensor, but a lot of the features are very computational photography-driven.

Apple also has a LiDAR sensor on the back, which feeds into its computational imaging by assisting with focusing. This is extremely handy for low-light situations.

Like the iPhones, the OnePlus does have a camera bump, one which wraps around from the side in a stylish fashion. Again, you’re getting three cameras, but likewise, there are some useful extras. 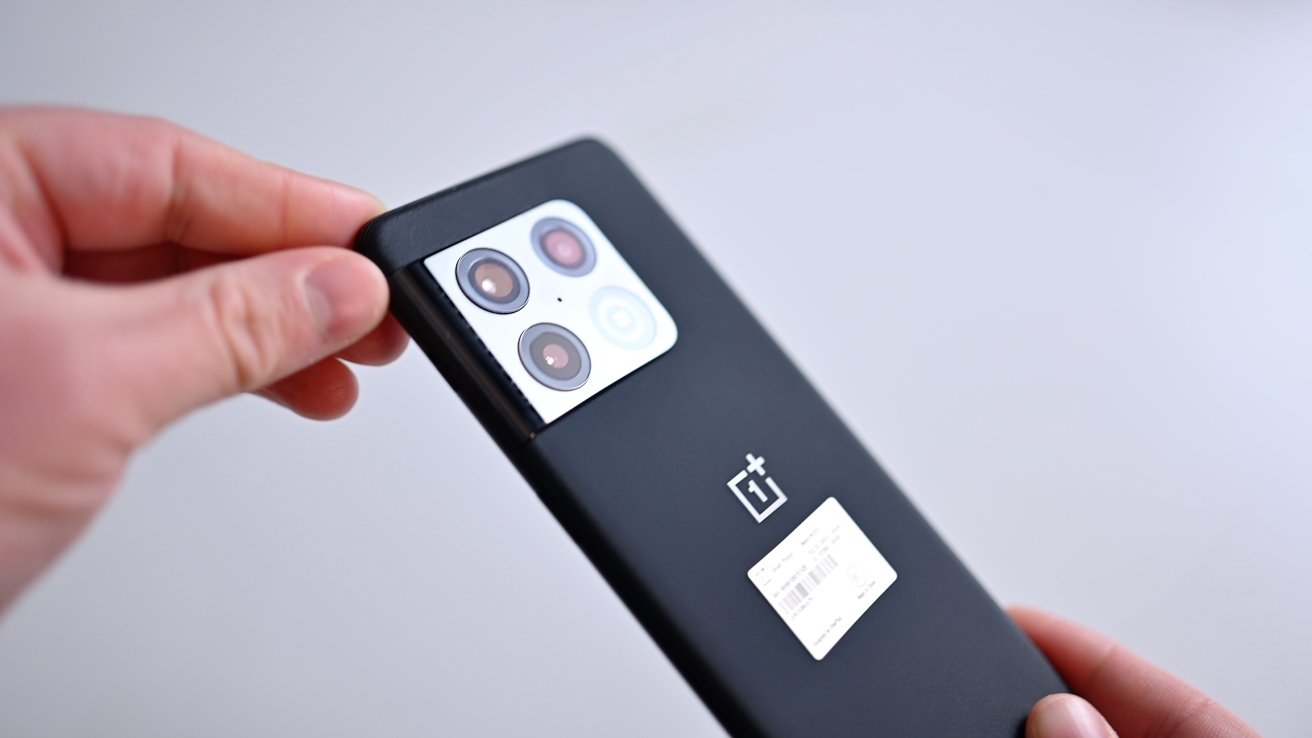 The cameras on the back of the OnePlus 10 Pro include 50MP and 48MP sensors.

For a start, the cameras are the same as the previous OnePlus 9 Pro, meaning there’s a 48MP Wide camera, a 50MP Ultra-Wide version, and an 8MP telephoto. In terms of zoom, there’s 3.3x on the telephoto, which edges ahead of the 3x on the iPhones.

Both the Wide and Telephoto have OIS, with the former also using a Laser autofocus system. The Ultra-Wide does offer a field of view of up to 150 degrees, which is employed in a new Fisheye Mode, but a 110-degree field of view is the default with added AI distortion correction. 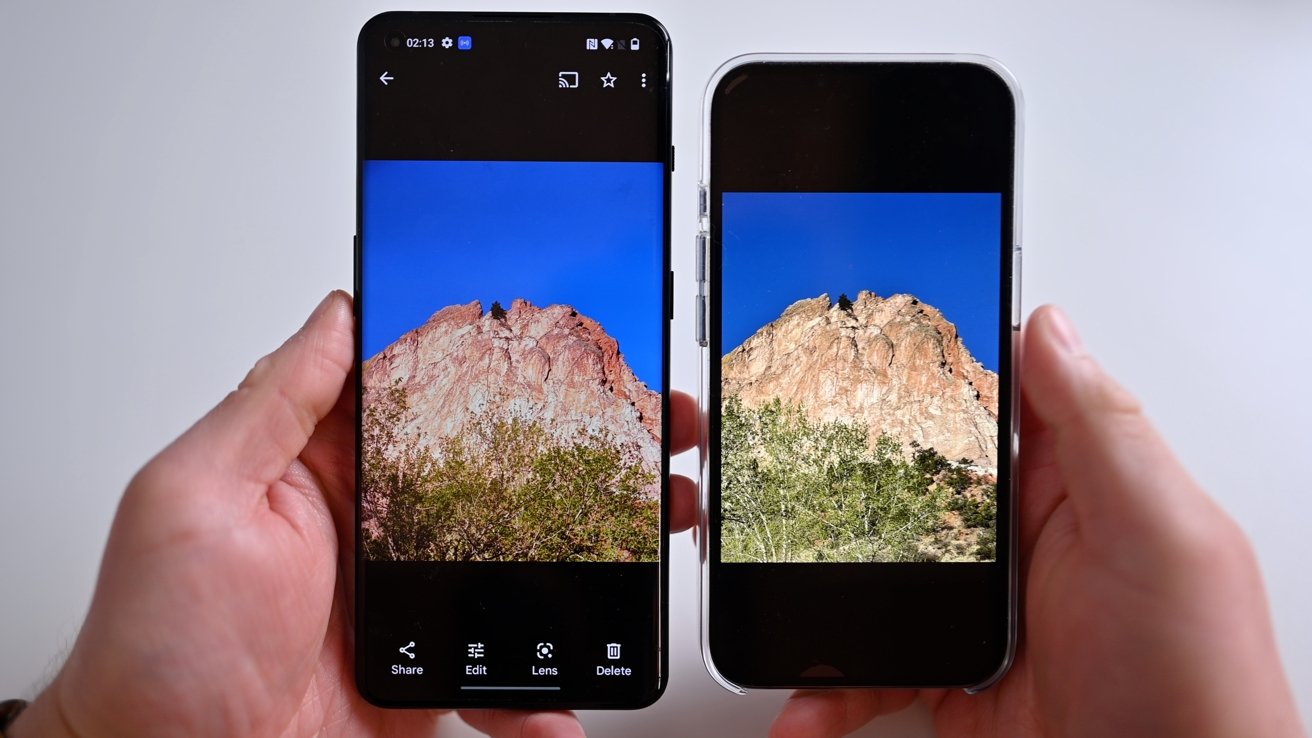 A significant marketing element is OnePlus’ work with the famous camera brand Hasselblad on its imaging system. The updated system now allows all three rear cameras to shoot in full 10-bit color, using Natural Color Calibration made with Hasselblad that applies to over one billion colors.

It’s even possible to use Hasselblad Pro Mode and a new RAW+ mode to shoot 12-bit RAW images. All of which can also use OnePlus’ computational photography benefits. 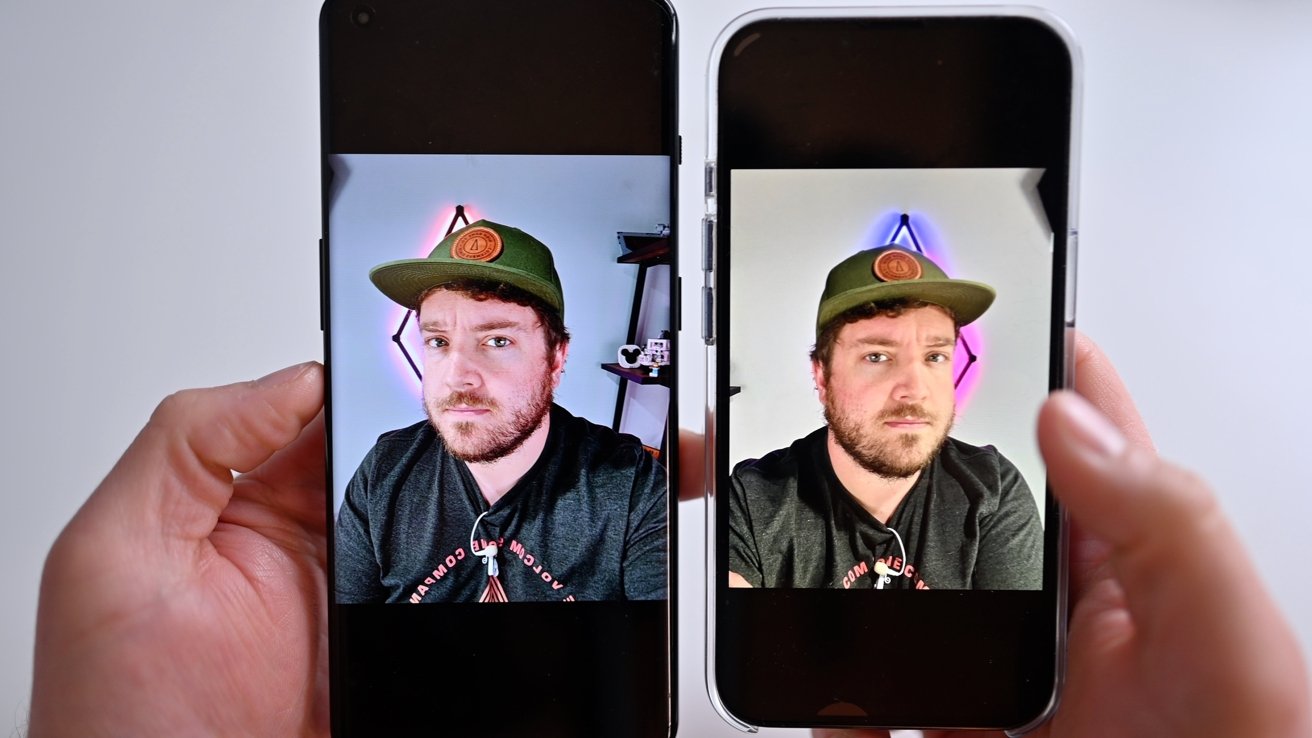 In our sample shots, iPhone 13 Pro’s 12MP telephoto lens came out on top easily, but the 48MP wide-angle camera of the OnePlus 10 Pro bested the iPhone. We also saw much better color representation on the OnePlus 10 Pro than the iPhone, as you can see in the photos above.

On the movie side, the OnePlus 10 Pro has a Movie Mode, enabling budding videographers to adjust the ISO, white balance, and shutter speed while recording. The Movie Mode also captures in a LOG format, which can help with more advanced video productions.

Around the front, Apple has its traditional notch with the TrueDepth camera array, providing 3D mapping of a user’s face for Face ID and being capable of a 12-megapixel picture. OnePlus instead uses a small camera with a 32MP sensor, using a small punch-hole design in a corner to minimize its impact on the screen.

Apple differs significantly from most other smartphone producers in that it designs its chips for processing. The iPhone 13 Pro range uses the A15 Bionic and 6GB of memory.

OnePlus doesn’t have its own chip design, so instead, it relies on one produced elsewhere. In the OnePlus 10 Pro is a Snapdragon 8 Gen 1 made by Qualcomm.

The A15 uses its own Apple-designed five-core GPU, while the Snapdragon uses an Adreno 730 GPU. Both also boast machine learning capabilities, with Apple opting for its Neural Engine versus the Snapdragon’s seventh-generation Qualcomm AI Engine.

OnePlus also includes more memory, with 8GB in the base configurations and options for up to 12GB.

Do bear in mind that Apple does tend to exert more control over when and how apps run, so iOS tends to do a lot more with less memory. In theory, this balances matters.

In terms of benchmarks, while we know a lot about the iPhone 13 Pro and Pro Max, the same cannot be told about the OnePlus. Copious benchmarks are available on Geekbench, putting the iPhone at 1,694 for single-core performance, 4,643 for multi-core, and 14,218 for Metal.

As there aren’t any released benchmarks for the OnePlus 10 Pro at the time of publication, the next best thing would be the Samsung Galaxy S22 Ultra tested by AppleInsider in February. Since it uses the same chip, it should offer a similar level of performance to the OnePlus.

While reports say Samsung has been caught up in an app-throttling scandal, benchmark apps like Geekbench were allowed to run at full speed. Still, this does mean you may want to take the comparison with a pinch of salt at this time until proper benchmarks are released.

A headline feature of the OnePlus 10 Pro is its ability to hold power. For a start, its 5,000mAh battery is huge for a smartphone, with the iPhone 13 Pro using a 3,095mAh unit and the Pro Max using a 4,352mAh version.

OnePlus hasn’t made claims about how long the battery will last. Meanwhile, Apple says its iPhone 13 Pro can last for up to 22 hours of video playback, and the Pro Max can go up to 28 hours. 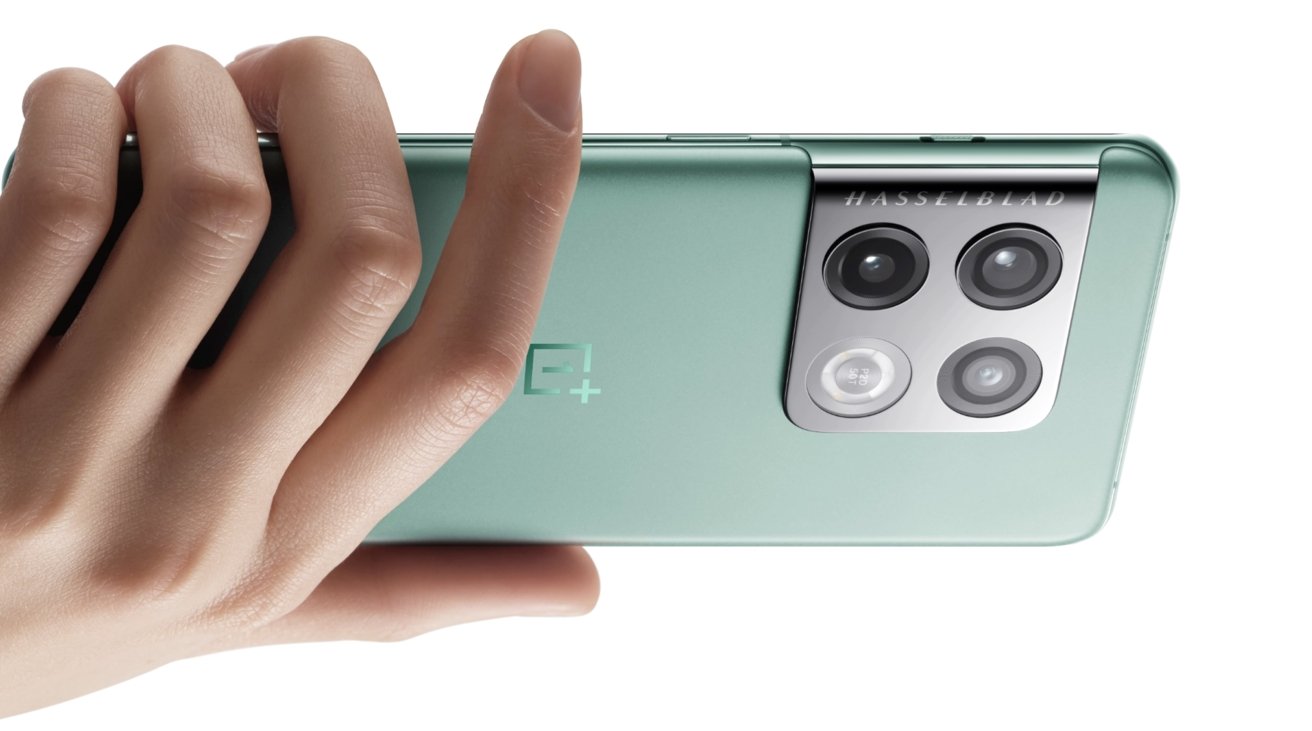 Hasselblad is helping OnePlus with its camera system once again.

Suffice to say, you’re going to get a hefty amount of usage time on all three devices.

For getting power back into the smartphone, OnePlus takes quite a leap forward on that front.

Apple offers a maximum of 20W charging when connected with a cable to a compatible power outlet. If you’re using MagSafe, the maximum drops a bit to 15W, and 7.5W on Qi. 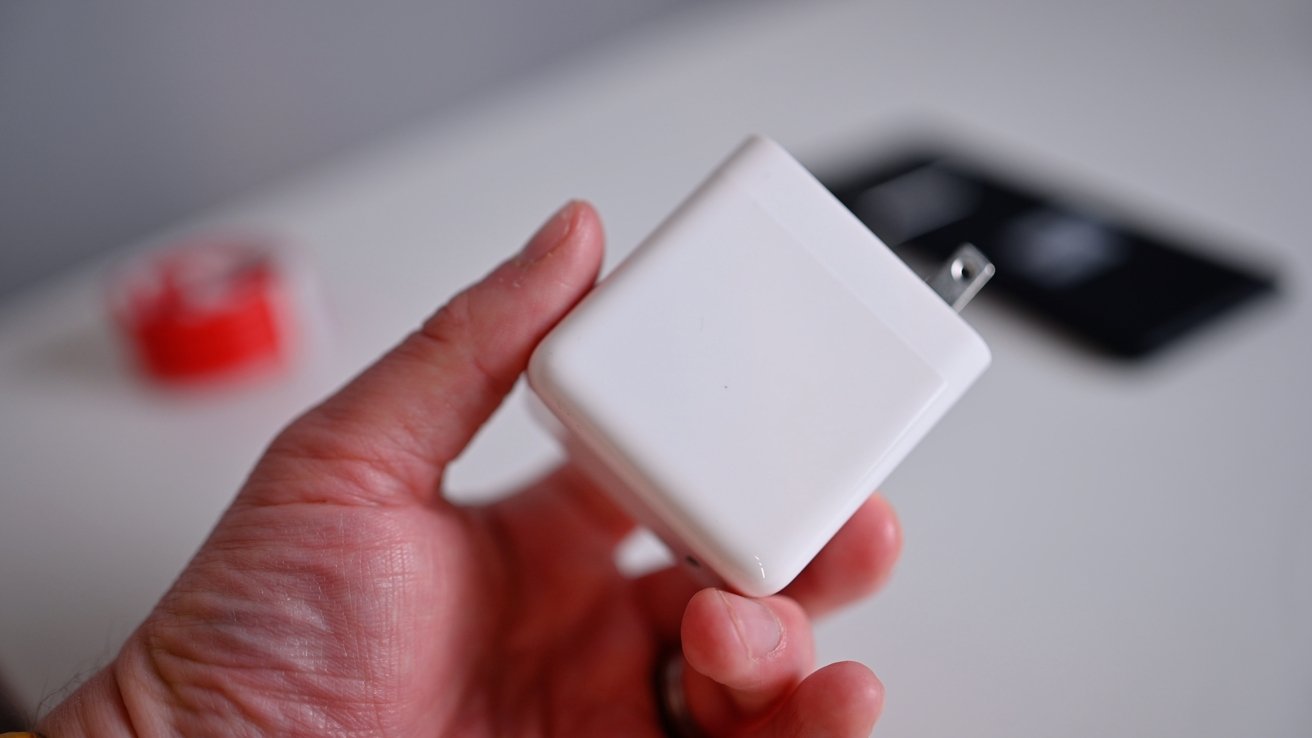 OnePlus uses what it refers to as “SUPERVOOC Flash Charge.” Aside from the weird name, you can use the included 65W power adapter to recharge. An 80W USB-C brick is also available that can charge the smartphone from empty to capacity in an impressive 32 minutes.

If you want to do it without the cable, there’s the equally annoyingly named “AirVOOC Wireless Flash Charge.” Using compatible accessories at a slightly lower 50W, you still get a flat-to-full charge time of 47 minutes.

For comparison, you have fast charge on the iPhone using a 20W adapter or higher, though it can manage only 50% in about half an hour. Also, you have to acquire the charger separately.

Apple’s iPhone 13 Pro and Pro Max are sold in storage options including 128GB, 256GB, 512GB, and 1TB for both variants. You also have a choice of four colors to choose from as well.

As it is currently sold in China, there are four varieties available. However, as OnePlus hasn’t released pricing details, we have to rely on conversion from Chinese pricing. 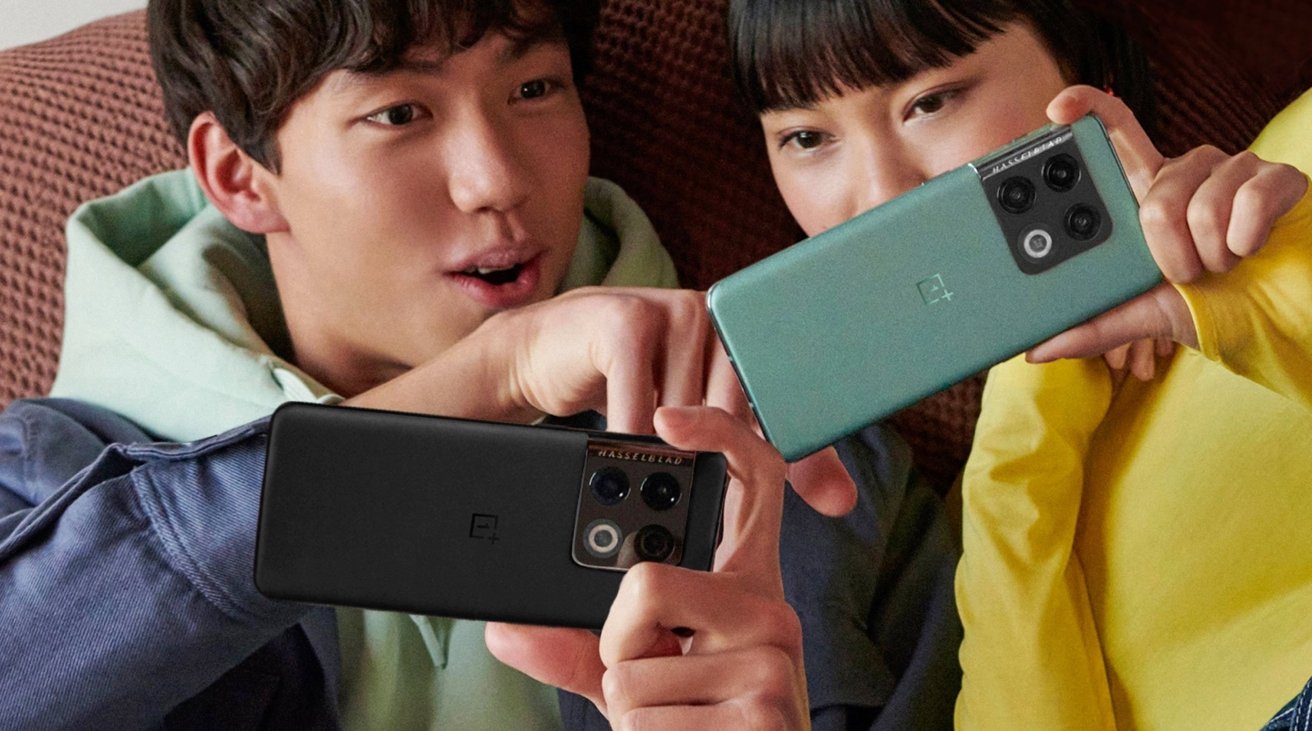 For the moment, the OnePlus 10 Pro is available only in China.

Do bear in mind that it’s plausible for Western pricing to be higher than their Chinese equivalents. Sure, this does show the 512GB capacity model costs less than the cheapest iPhone 13 Pro, but that probably won’t be the case in other global markets.

Looking at the specifications list, the OnePlus 10 Pro is a very impressive device. It’s hard not to look away at the prominent figures, such as those extremely high resolutions of camera sensors and the display. The lack of a massive notch also scores points for OnePlus in this case.

However, if you really consider it, there’s still a world of difference between bigger, better numbers and real-world usage. Sure, you can use a 48-megapixel sensor to take photographs, but it’s another thing entirely for it to create great-looking images with its computational photography.

The same problem exists for the impressive high-wattage charging. It’s great that you can get a full recharge of the battery for the same length of time as you’d watch a TV show for, but it’s also seemingly overkill.

If you only recharge your smartphone overnight, there’s little point in caring about it doing so within minutes rather than hours.

Then there’s the whole argument about using Android versus the Apple ecosystem, but that’s a more personal discussion than this article can offer.

The OnePlus 10 Pro is, on paper, a competent mobile device. It’s certainly something that could give the iPhone 13 Pro and Max a run for their money on specifications alone.

Whether it translates into better performance in real-world usage, remains to be seen. We’ll let you know how it goes when ours arrives.