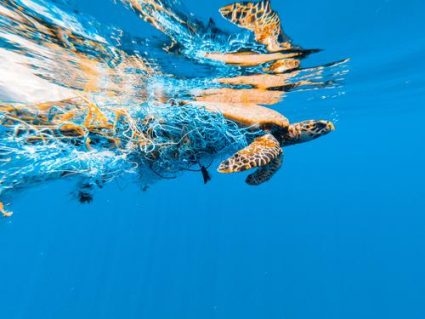 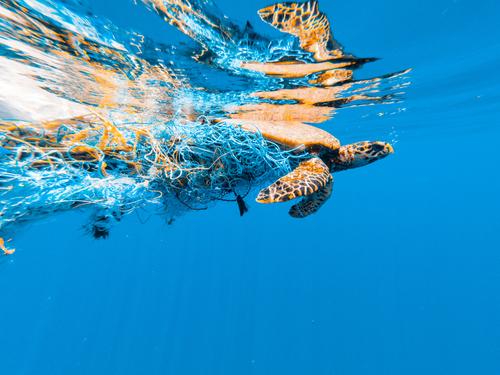 Innovative technologies are under development to reduce plastic litter at sea by at least 50% © MOHAMED ABDULRAHEEM, Shutterstock

‘It’s the scale of it – it’s a global problem. You can guarantee that any beach you walk on, you’ll find pieces of plastic,’ said James Comerford, a senior researcher in materials and nanotechnology at SINTEF, an independent research organisation in Oslo, Norway.

Plastics are estimated to comprise 85% of marine litter, with 11 million metric tonnes entering the oceans annually and the volume potentially tripling by 2040. Some have predicted that, by weight, there will be more plastics than fish in the seas by 2050.

In light of the alarming outlook, innovative approaches are required to tackle the problem. This is exactly what the EU Mission “Restore our Ocean and Waters by 2030” is targeting, with the ambition of reducing plastic litter at sea by at least 50%, cutting microplastics released into the environment by 30%, and halving agricultural nutrient losses as well as the use of chemical pesticides.

To reduce pollution, the Mission is launching a ‘lighthouse’ in the Mediterranean Sea that will act as a hub to develop, demonstrate and deploy solutions far and wide across the world by getting all the relevant players on board. Its role is to connect and structure activities, disseminate and upscale solutions and mobilise relevant actors.

Its initial focus is on plastic pollution. Projects such as In-No-Plastic and AQUA-LIT are exploring ways to reduce the contribution of people and sea-based industries to plastic pollution, while the Maelstrom project looks at where marine debris is distributed and how best to remove it from the seabed and water. It is also exploring economically viable ways to recover and recycle marine plastic debris, such as circular product design for fishing gear.

The wide-reaching In-No-Plastic project, led by Comerford as the project coordinator, is developing a range of technologies that deal not only with easily visible, large pieces of plastics – or macroplastics – but also the insidious threat of tiny microplastics measuring less than 5 millimetres, and even smaller nanoplastics.

‘Macroplastics are going to need different cleaning technologies to microplastics, so we’re looking at the whole spectrum,’ said Comerford.

Several separate technologies that are currently under development can be deployed in tandem to clean up the water. A couple of them help to deal with microplastics by clumping them into more manageable sizes, one using biodegradable chemical substances called flocculants that cause particles to coagulate, and the other – known as SepaRaptor – using ultrasonic waves that push the particles into clusters.

These can be combined with another technology that uses a screen to sift out plastic debris.

On the macroplastics side of things is SEEker, a four-wheeled plastic-waste-collection robot being trained using artificial intelligence to identify and pick up litter from beaches and put it in a bin carried on its back. The robot will also have a loading station near the beach, where it can dispose of waste and recharge.

‘It’ll be entirely autonomous,’ said Comerford. ‘Because there’s so much litter and because it’s everywhere, you need something focusing on it all the time. To have solely a human influence is really time-consuming.’

Another technology, which includes features that could be key to tackling the issue of plastic pollution in the long-term future, is an application for smartphones. This encourages volunteers to gather litter and record data on their activities, using “social rewards” sourced via the local economy – for example, discounts on pizzas or at the gym.

However, the app will also eventually help to track the amount of plastic waste collected, recycled and used in products, allowing us to get more of a handle on how effectively the circular economy is working.

So many people say they include recycled material in products. If we’re really to make a difference and turn this whole thing round, that’s got to be countable

Although that function is currently under development, Comerford explained that it will be supported using photos and GPS data on collected litter, as well as blockchain technology – which can enable better tracing of the contents of goods by storing data on the movement of materials through a supply chain.

‘So many people say they include recycled material in products,’ said Comerford. ‘If we’re really to make a difference and turn this whole thing round, that’s got to be countable.’

But apart from the pure tech side, public buy-in for solutions to the plastic problem is crucial. Partners in In-No-Plastic, such as non-profit organisation Venice Lagoon Plastic Free (VLPF), are also conducting clean-up initiatives supported by the mobile application and gauging the attitudes of the public on plastic pollution.

Davide Poletto, an executive director at the organisation, says Venice is an ideal place to run plastic pollution initiatives, as a location with an enclosed area of water, and intense marine traffic, aquaculture, fishery activity and tourism. ‘The lagoon of Venice is the largest wetland in the Mediterranean basin and a World Heritage Site of UNESCO, and this is an extraordinary laboratory to work in because you have a lot of different problems,’ he said.

He also points out that the pandemic has provided a ‘unique opportunity’ to analyse just how much overtourism contributes to pollution, including that caused by plastics, and the capacity of the local ecosystem to recover. Poletto cites a study showing that 17 of 40 chemical contaminants previously found in the Venice lagoon were undetectable after early-2020 lockdowns, while the presence of many others was significantly lower.

Recent In-No-Plastic events appear to have shown promise for growing public awareness and interest in getting involved. In one clean-up event organised in Venice in 2021, 130 people collected three tonnes of waste, including more than 1,500 kilograms of plastics.

Poletto also cites figures from an ongoing awareness study carried out by his team on more than 1,500 people in Italy, the UK and Croatia, the vast majority from outside related work sectors. Over 85% of respondents per country said joining clean-up events had helped them better understand the seriousness of marine plastic pollution, while almost 95% identified microplastics as a bigger issue than macroplastics – suggesting understanding is now widespread on the perils of invisible fragments.

Poletto pointed to growing coverage in the news and social media, as well as first-hand experience. ‘It’s interesting to see how people are realising all those things,’ he said. ‘And it’s not that they are specialists.’

But apart from stimulating public interest, he said more knowledge is needed on sources of plastic pollution to better advise decision-makers on how to deal with it. Using another app that aids with beach litter identification as part of the Maelstrom project, VLPF found that on some beaches, up to 40% of plastics on nearby islands such as Pellestrina came from fishing gear – mostly mussel nets.

This is important to show, for instance, that a big proportion of plastics in these areas goes straight into the sea rather than originating in rivers, said Poletto. ‘Then there’s evidence brought to the public administration that we should do more in certain locations.’

Gear is a big issue in the aquaculture industry too, where there is also an urgent need to tackle plastic pollution given that it is the world’s fastest-growing food sector. Aquaculture is estimated to account for more than half of global fish consumption, and could reach over 60% in the next decade.

But Mariana Mata Lara, project manager at environmental technology organisation Geonardo, says that much more knowledge is needed on how to tackle plastic pollution from the sector, caused by items including cages, ropes, nets and buoys.

She also said we need to separate data on pollution caused by aquaculture, or farming of aquatic produce, from that caused by traditional fisheries that catch wild fish. ‘In reality, we don’t know exactly the amount of plastics that comes from this sector,’ added Lara.

With this in mind, a project she led called AQUA-LIT sought to create a knowledge base on both plastics and other marine waste before the problem gets too big as the sector surges. ‘In many things in life, we come up with solutions once the problem exists. The idea with AQUA-LIT was to go in parallel and start solving this as it grows, so we don’t later have to come up with solutions to cover what we did in the past,’ said Lara.

AQUA-LIT did this by developing a toolbox of measures to monitor and prevent marine littering in the sector, as well as to remove and recycle waste.

The idea with AQUA-LIT was to go in parallel and start solving this as it grows, so we don’t later have to come up with solutions to cover what we did in the past

More than 400 ideas and solutions

The resulting toolbox contains a variety of measures, arranged by topics including different sea basins, aquaculture types, and stage of removal and recycling, as well as policy recommendations. ‘In the toolbox, we have provided more than 400 ideas and solutions,’ said Lara.

As part of its work, AQUA-LIT has created an inventory detailing 65 sources of waste generated by aquaculture, a database on how European ports deal with litter and regional maps on percentages of aquaculture-related litter across its focus sea basins.

Lara added that many of these ideas can be applied or expanded on elsewhere. ‘We wanted this information to be useful not only for these three sea basins we worked in, so we created action plans to transfer the knowledge to other regions,’ she said.

As an example, Lara described how the resources had been used by the Global Ghost Gear Initiative, an alliance involving the fishing industry, private sector, corporates, NGOs, academia and governments that focuses on solving the problem of lost and abandoned fishing gear.

‘The Global Ghost Gear Initiative developed a best-practice framework for the management of aquaculture gear, and they used four of our reports, our marine inventory and our toolbox to help build it,’ said Lara.

With a section in the toolbox for people to contribute ideas, she hopes it will grow further and that the knowledge base will ultimately lead to more practical solutions. ‘The idea is that it’s for everyone and fed by everyone,’ she said.

Lara said that promise was shown by AQUA-LIT being invited to present at events in locations such as the Black Sea, and for a Latin American audience, reflecting the significant need for this type of information and its importance as a widespread issue. ‘I think the value of AQUA-LIT is having done that first step,’ she said.

With In-No-Plastic likewise hoping to provide foundations to drive forward solutions to marine waste, the problem of plastics and other litter is set to be tackled from multiple angles.

That will also require wide societal strategies to deal with waste, said Comerford. ‘It’s a holistic approach we need,’ he said. ‘You need to look at everything in the environment currently, but also we can be a bit cleverer about our products in terms of sustainability and end-of-life options.’

This article was originally published in Horizon, the EU Research and Innovation magazine.

Horizon Magazine
brings you the latest news and features about thought-provoking science and innovative research projects funded by the EU.

Horizon Magazine
brings you the latest news and features about thought-provoking science and innovative research projects funded by the EU.