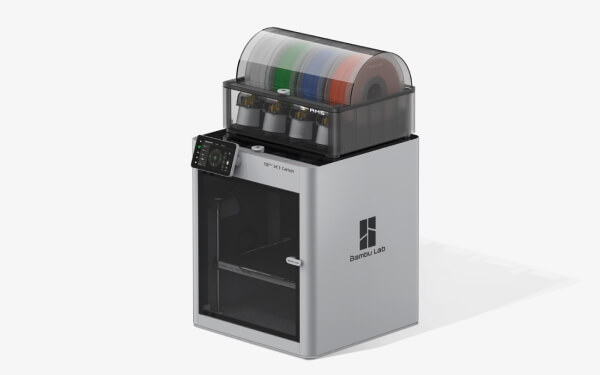 Bambu Lab has announced the release of the Bambu X1 Series, which is a CoreXY printer that is promising to bring 3D printing into the AI era. And it has multi material capability, spaghetti detector and mini-LIDAR.

Sounds good to us. So who are Bambu and what are they offering with this printer?

Read on to discover more.

Bambu Lab is based in Shenzhen, China and they have a feature-packed new CoreXY printer that they want you to buy. Looking at the specs and price, we are indeed tempted.

CoreXY printers have a lot of advantages compared to other systems, not least the speed gains from using a CoreXY design.

In a CoreXY, the z-axis is moving up and down as opposed to an i3 style “bed shifter”, therefore there is less interia resulting in faster speeds and better prints at those speeds. How much faster? An 8x boat in acceleration resulting in a 70% reduction in print time, so they say.

Another advantage is that the print volume of a CoreXY takes up a large fraction of the total printer size. Your i3 structure needs to allow space for the bed to slide back and forth. The CoreXY does not. In fact, the Bambu Labs X1 has one of the largest bed to printer size ratios in the market, meaning you get more bang for your buck in terms of physical space in your workshop.

So, what makes the X1 so smart? For starters, it features a Quad-core SoC with a dedicated 2TOPs Neural Processing Unit, matching Bambu Micro Lidar and over 40 sensors.
That’s what.

Spaghetti Detectors, LiDAR and other goodies

And LiDAR? What’s that about?

Yes, the X1 printer features a micron level mini LiDAR and vision camera which both level the bed, calibrate the flow and keep an eye on the spaghetti situation. Alles gut so far!

As you can see in the picture of the printer, it has room for 4 filament rolls, which can be blended to mix 16 colors (4×4). Additionally, the full metal hotend allows printing up to 300 Celsius meaning you can print PC, PA and CF-filled PA no problem.

Check the printed multicolor jet engine out in the image below.

“There has been a difference between the public imagination of 3D printers fed by pop culture, which gives the idea of a magic box that satisfies every need in the blink of an eye, and the actual experience of using a 3D printer,” said Dr. Ye Tao, Founder and CEO of Bambu Lab.

“Our goal is to create a state-of-the-art 3D printer which narrows that gap and makes 3D printing a true work of creativity.”

The X1 Series will be launched on Kickstarter very soon, and the prices are shown in the table below, with big discounts for early bird backers.

That’s a lot of printer for the money, and the best part is, you don’t have to assemble it yourself unlike some budget brand printers.

We can’t wait to get our hands on one for “review” purposes..

Shipment will start immediately upon the completion of the Kickstarter campaign in July. The campaign itself starts at 15:00 UTC, on May 31st, and you can keep an eye on the X1 landing page over at this link.