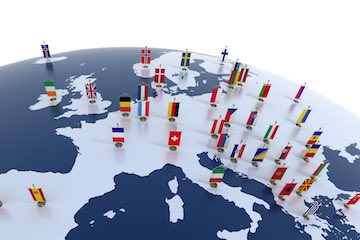 After a Covid-induced pause in 2020, investment in European startups roared back in 2021 with a record-breaking €100 billion (USD $107 billion) injection of funds according to The Next Web. Fintech, grocery delivery, and recycled apparel and electronics were popular investments.

While London has traditionally been where new companies locate, Brexit prompted some to select Paris, Berlin, or Amsterdam as alternative headquarters.

Following is a list of notable European ecommerce-related unicorns, i.e., private companies valued at over $1 billion.

Klarna is a Sweden-based buy-now, pay-later provider. An investment last June valued the company at $46 billion, making it the most valuable fintech startup in Europe. It recently announced the laying off of 10% of its workforce of 7,000 as it seeks new funding of approximately $1 billion. Analysts expect its valuation to drop to around $30 billion. The company’s borrowing costs have risen sharply due to global economic turbulence. Its yearly operating losses almost doubled in 2021 to $487 million. Klarna says it intends to focus on profitability rather than expansion. The company operates in 20 global markets and has 150 million customers.

Back Market, based in France, sells professionally refurbished electronic devices and appliances to consumers in 13 countries: France, the U.S., Germany, the U.K., Italy, Spain, Belgium, Austria, Netherlands, Portugal, Japan, Finland, and Ireland. The company focuses on Apple products, mainly smartphones. It employs 650 overall employees in New York, Berlin, Paris, and Bordeaux. In January of this year, the company closed a $510 million Series E funding round, bringing its 2022 valuation to $5.7 billion.

Vinted is a Lithuania-based marketplace for buying, selling, and exchanging second-hand clothing, accessories, and home decor. It is worth $5 billion, making it one of the most valuable ecommerce and direct-to-consumer unicorns in Europe. Founded in 2008, Vinted is headquartered in Vilnius with over 1,200 total employees in Berlin, Amsterdam, Prague, and Utrecht. It operates in 15 markets: Spain, France, Luxembourg, Belgium, Netherlands, Germany, Austria, Czech Republic, Poland, Lithuania, the U.K., Italy, Portugal, the U.S., and Canada.

Flink is a Germany-based delivery company backed by U.S.-headquartered DoorDash. It promises grocery delivery at supermarket prices, including organic fruits and vegetables, serving Austria, France, The Netherlands, and Germany. In mid-May, Flink announced that it would acquire France-based quick delivery service Cajoo. Flink also secured funding this month from Carrefour, a France supermarket giant and a prominent Cajoo investor, bringing the company’s valuation to roughly $5 billion.

Sorare was founded in Paris in 2018 as a non-fungible token fantasy soccer game. Players buy, sell, trade, and manage a virtual team with digital player cards. The game uses blockchain technology based on Ethereum. In October 2021, Sorare raised $680 million in Series B financing (the biggest such investment in Europe ever) for an overall valuation of $4.3 billion. The company plans to sign up the top 20 soccer leagues in Europe and expand into other sports. In 2021, consumers traded over $150 million worth of cards on the platform.

Mirakl is a cloud-based ecommerce software company jointly headquartered in Paris and Somerville, Massachusetts. It provides a marketplace platform to retailers, manufacturers, and wholesalers. Mirakl’s valuation is $4 billion. In 2020 customers spent $3.1 billion on marketplaces using its software.

Gorillas is a Berlin-based grocery delivery company that promises receipt of goods within 10 minutes of ordering. It has about 700,000 active customers worldwide. E-bike riders make all deliveries. Seven months ago the company raised nearly $1 billion with a $3 billion post-money valuation. It recently announced it would lay off 300 employees in its headquarters and in Italy, Spain, Denmark, and Belgium, focusing instead on Germany, France, The Netherlands, the U.K., and New York City — collectively 90% of revenue.

Vestiaire Collective, founded in 2009, is a Paris-based consumer-to-consumer marketplace with over 3 million luxury items on sale at any one time. Vestiaire Collective is a Certified B Corporation committed to the circular economy with offices in New York City, Los Angeles, Hong Kong, Seoul, and Singapore, and a tech hub in Berlin. Vestiaire Collective’s March acquisition of U.S. resale marketplace Tradesy puts the company in direct competition with The RealReal. A September 2021 funding round of $209 million valued Vestiare Collective at $1.7 billion.